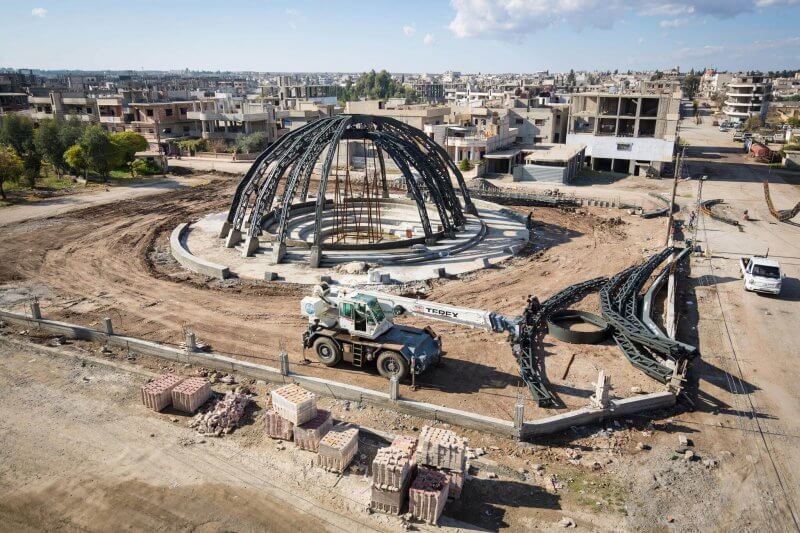 The relationship between art, democracy and propaganda has been the interest of artist Jonas Staal for almost a decade. On Friday 26 February, he held a public lecture in Bratislava called “The Architecture of Revolution”. Although the talk was conducted in English, the club where it was held, Tranzit, was rather full.

Staal engages directly with social movements, progressive political parties and resistance movements in order to capture the imagination of art in furthering political crises and struggles.

During the lecture Staal discussed some of his key works from the last decade. He used the term “architecture” to refer to both the “ideological architecture” which underlies artistic production, and also the practice of architecture. The latter has become more and more prominent in his work, and was demonstrated by his latest project – a new public parliament which he developed for the autonomous Democratic Self-Administration of Rojava, a new stateless entity in the northern part of Syria, which declared independenence in 2012.

Staal has organized exhibitions with artworks taken from  private collections of political parties in the Netherlands, developed an analysis of a prison designed by the Dutch ultranationalist MP, Fleur Agema, and provided the visitors of 2013 Venice Bienale with a free smartphone application which gave an ideological analysis of every pavilion. His underlying aim is to make the political and ideological investments in contemporary art and architecture visible to the public. He claims that propaganda is not contradictory to modern (capitalist) democracy. In his own words, “art continues to serve, in many different ways, the dominant interests of power”.

In accordance with this analysis, it seems only logical that he has initiated new platforms for emancipatory politics. In recent years Staal has created international assemblies for artists and politicians and has tried to develop alternative platforms for stateless entities and liberation movements from all over the world. He engages directly with social movements, progressive political parties and resistance movements in order to capture the imagination of art in furthering political crises and struggles. In Staal’s own words these projects are a form of “counter or emancipatory propaganda.”

Although it can be argued that some aspects of Staal’s ideas are contradictory, incoherent and even dangerous, it is without a doubt that they pose important and difficult questions. In addition, the artist tries to find answers to these questions and to link them to  the real world. One could hardly be more opposed to the concept of l’art pour l’art. This makes his art worth the time, worth thinking about and very refreshing, especially in Slovak circumstances.