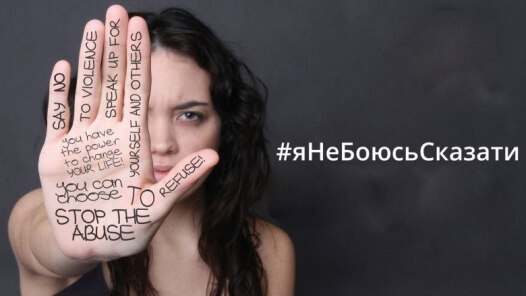 Something incredibly important is happening on Ukrainian-, Belarusian- and Russian-speaking Facebook: under the hashtag ‪#‎IAmNotAfraidToSpeak (#яНебоюсьСказати, #яНебоюсьСказать‪), women are describing countless stories of sexual harassment and sexual violence committed against them. The campaign, which was started by Ukrainian social activist Anastasiya Melnychenko who describes it as an “action” rather than a flash-mob, has by now produced thousands of stories representing the terrifying level of sexual and gender-based violence in Eastern Europe. The significance of this conversation, especially in countries where the theme of gender and gender-based violence is at the periphery of public debates at best, cannot be overestimated. This is probably the most important public discussion that has ever happened on social media in the region. Women who have decided to speak out and publicly describe despicable things that happened to them deserve the highest praise and support (not least, against an embarrassing backlash from rape culture apologists).

The significance of this conversation, especially in countries where the theme of gender and gender-based violence is at the periphery of public debates at best, cannot be overestimated.

There are two important and disturbing aspects of the action that should be noted. First, as a female friend observed, lots of posts begin with a disclaimer “I am lucky: nothing really serious ever happened to me”, only to proceed to tell a story of harassment, abuse, physical threats, physical violence and near escapes from rape. So this is the societal norm we are dealing with: women consider themselves lucky to survive attacks without being raped, the scale and frequency of attacks in the first place do not surprise anyone. Second, the majority of stories I have seen are about strangers: these are various episodes of harassment and sexual violence on public transport, in the streets, parks, at public events, and so on. However, statistically, we know that one is much more likely to experience violence from someone familiar: a friend, a relative, a partner, a husband. This whole next layer of gender-based violence is awaiting to be uncovered and discussed.

While we must understand the structural (socio-economic, political, ideological, and cultural) reasons behind this horrific level of violence against women, I would like to address one aspect of patriarchy here: the almost universal complicity of men in both actual violence and in the perpetuation of cultural norms and stereotypes that make it possible. As a male commentator noted, if almost all of our female friends experienced harassment and sexual violence, it is impossible that it was committed only by a small group of “perverts” and not by “us”. After all, it is well known that these are not only “bad guys”, creepy strangers who harass and rape women – the proverbial “nice guys” are guilty too. We are guilty because we commit acts of violence and harassment against women. We are also guilty because we never confront our friends and colleagues who engage in such behaviour.

Men must contribute to this fight by speaking out and acting against toxic masculinity and its routine acts of violence – symbolic, emotional and physical.

Time is ripe for us, men, to take responsibility for our actions: we should start speaking about what we and people we know have done to women. We should confront ourselves and our friends. We should stop ignoring, trivializing and normalizing violence committed by us and people around us. This is going to be difficult and embarrassing: it is extremely hard to admit that one was close to committing rape or, even more so, actually raped someone. It is also extremely difficult to break societal conventions and confront our peers when they are behaving inappropriately towards women. But this should be done. Men must admit their own acts of violence and complicity. Let me begin by saying that I was in a situation when I preferred to ignore the fact that a drunk person cannot consent to sex; that on numerous occasions I encouraged my friends to do what can only be described as sexual violence: “pressing” reluctant women into having sex with them; that I never dared to confront people in power who used their positions (e.g. teaching jobs at universities) to start sexual relations with women who were dependent on them in some ways.

If we as men, especially those men who claim to be feminists and progressives, do not start talking about our universal complicity, we will continue live in a world where there are almost no women who never experienced violence and/or harassment, a world, where women fundamentally cannot feel safe and are forced to organize their lives around the threat of male violence. Men must contribute to this fight by speaking out and acting against toxic masculinity and its routine acts of violence – symbolic, emotional and physical. A first small step to beginning to address this systemic violence is to listen seriously to and support our female friends making their confessions on social media.