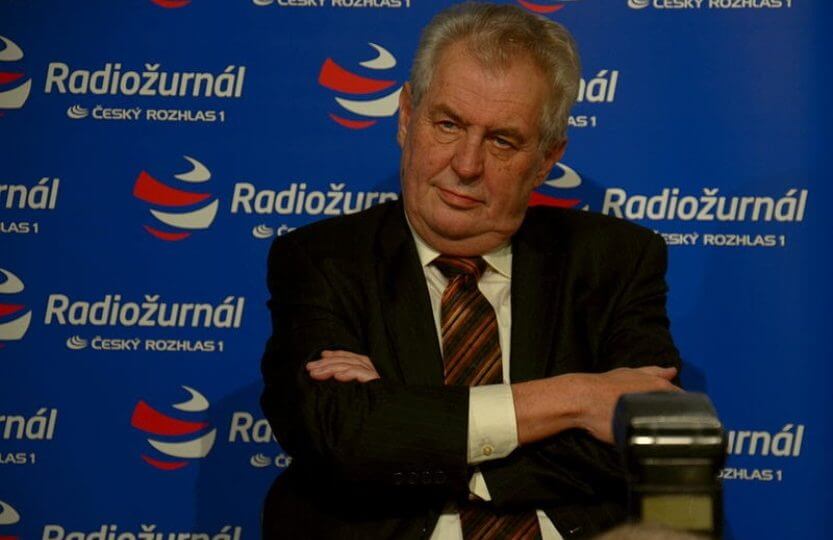 One of ways to define the anglo-american term “shitstorm” is roughly as follows: “an objective that looks promising at the start but upon achievement leads to a situation completely out of control and outside the realm of human understanding”. One example could be the decision to export democracy to Iraq. The result? Hundreds of thousands deaths, the entire region crumbling like a house of cards and the establishment of an Islamic caliphate complete with its own army of cutthroats that have driven out several million refugees into Europe and the surrounding countries.

A couple years ago, this euphonious little word found another good home in Germany, owing its popularity to Chancellor Angela Merkel herself using it during negotiations regarding the crisis of the European South. In the German context, it primarily signifies the mass mental defecation present on the Internet and social networks – which we know well from the example the Czech Republic. German linguists actually went further than just letting “shitstorm” into the vocabulary; they even proclaimed it the Anglicism of the year.

It has become apparent that recent developments call for a Czech take on the word. President Zeman, along with his pet parrot, spokesman Jiří Ovčáček, is way too often seen launching feces-spreading hurricanes across the whole republic; an attitude rather conspicuously similar to that of his counterpart from across the globe Donald Trump, whom Zeman rather unsurprisingly heartily supports. Trump’s example allows us to clearly expose the revival of public vulgarity – not as a small-minded person’s obsession, but as a viable marketing strategy used with purpose and calculation and bearing its bitter fruit. This phenomenon comes as the effect of the dissipation of elementary trust in the political establishment, which is regarded as fundamentally corrupt and opposed to the people. While that is certainly not far from the truth, this reaction to the situation does not even approach actually solving it.

Justified anger not expressed in any meaningful way inevitably turns into demands for a time bomb that would either dispose of the corrupt and estranged elite or at least bully it properly.

This is precisely what people like Donald Trump, Andrej Babiš or Miloš Zeman are doing and they are very much aware of it. Through them, the people have not elected just their representatives, but – primarily – avenging angels expected to spread havoc and destruction among the ranks of those whom the people grew so bitter towards.

Would it really be so naïve to think that Zeman’s actions are just mistakes of a vengeful, bitter old man whacking everything that still shows any joy of living with his stick? This apostle of nihilism is just doing his job, the one he was elected for: he is the Jacobite instrument of righteous anger, using his symbolic guillotine to decapitate Havel’s followers, the liberal elite (“Prague coffee house vagabonds”), corrupt politicians and religious and ethnic minorities.

Maybe it is time to say that the personification of the whole issue – the situation where all our shaky fingers point directly to the guilty one in his Castle – is missing the core of the problem. Zeman is not just a person who ended up in his chair by some historical accident; he is just the tip of the iceberg made out of the scornful masses of “common people” who found themselves pushed to the side of current political events. They lack any relation to the system that brought them primarily blood, sweat, and tears, and they feel that someone robbed them of their life choices. The elite bubbles so often bashed by the President’s press anus Jiří Ovčáček will most likely never understand that: such a plotline does not fit into their scenario of a brave new world being played out after the revolution of 1989.

This is another reason why potential liberal presidential candidates like Petr Pithart and Michal Horáček are going face a big problem should Zeman decide to start his second five-year plan of brownish Jacobinism. The psychological profiling of our current lord and master may quite adequately diagnose him with a plethora of different mental pathologies but it lacks political reality. On the other hand, much can be hinted at by looking at the causes of Zeman ending up in the presidential chair. He was helped by the combination of three factors: the economic crisis, Petr Nečas’s right-wing government and Karel Schwarzenberg as his opponent.

As a response to the financial crises we elected the neo-liberal tandem of Nečas and Kalousek which decided to ignore all those who ended up costing Schwarzenberg the election.

Without people like Nečas and former Minister of Finance Kalousek, we would have known Zeman only from discount book stores that would sell his memoirs for the pittance of 39 crowns. The wailing of urban liberals and right wing parties is pure hypocrisy – it was them who fertilized the soil from which this evil now blossoms.

The golem at the Castle was formed out of the clay of public wrath by those who are now most vocal in despising him, the electorate just became the shem that breathed life into it. Since then it’s been spreading (politically incorrect) feces and wiping the tracks of Russian or Chinese interests. And he is still, sadly, lacking an opponent capable of facing him: in the conflict between nationally social conservatism and neoliberal cosmopolitism, the second is very much pulling the shorter end of the rope.

The liberal elites contradict themselves when they call for Scandinavian social settlement on one side and American capitalism on the other.

The people who praise the free market as the legendary accomplishment of 1989’s revolution will inevitably receive the gift of class-ethnic struggle, wrapped in brown paper with a red ribbon. It is likely that there is no solution to the conflict between the opposites of liberalism and conservatism in the Czech case; it is a vicious circle that keeps turning, allowing only very slow advances. One step forward, two steps back –  in the best case, Czech Republic is just shuffling its feet.

Noble populism nowhere to be seen

The progressive left wing is not without its share of the blame either – it became an opinion to mull over by individuals, or some kind of a lifestyle, instead of a political activity firmly anchored in history and capable of interpreting the current social conflict, bringing this interpretation to the attention of those involved and rousing them to emancipatory action.

On the parliamentary level, the progressive faction within the Social Democrats (ČSSD) has become rather hallucinatory: in the words of Prime Minister Bohuslav Sobotka or unsuccessful candidate for the Senate Václav Bělohradský, the social democrats should be inspired by examples provided by their friends in the West, rely on urban liberals and stop fully focusing on its traditional electorate. The idea seems to be that whatever pops up in the current complete mess of the West could – and should – work here under even worse conditions. Thankfully, it seems this utterly brilliant strategy will be rather short-lived – after ČSSD loses the parliamentary elections, the group advocating it will be replaced by a forming supply of bloodless opportunists. The new Prime Minister, Andrej Babiš, will have a simple message for the political left: you had your shot.

Until then, we can think about whether we really need another “decent President” with a high degree of political culture and all the right civic virtues.

What we actually find ourselves desperately missing is a “noble populism” of sorts, the voice of those who currently find their support in characters that promise to once and for all deal with corrupt politicians and snobbish elites.

This populism would, however, find real targets as opposed to fictional and substituted ones and it would not excuse bowing to Chinese interests by “patriotism”. Instead of pretty words and dirty jokes it would focus on dealing with the usurious distraint system, loudly oppose competitiveness based on cheap labor or criticize housing prices, the cost of living and low wages. It would do real political work instead of just pretending to and having to bow to fear and moral panic. In other words: we need a left-wing, ideally female, president. The Czech political environment, however, is clearly incapable of generating a politician like that, so we better get ready for the presidential shitstorm having another turn.

Martin Vrba
Martin Vrba is a journalist at Czech progressive daily website A2larm (www.a2larm.cz). He hold a degree in philosophy.
> see other articles <