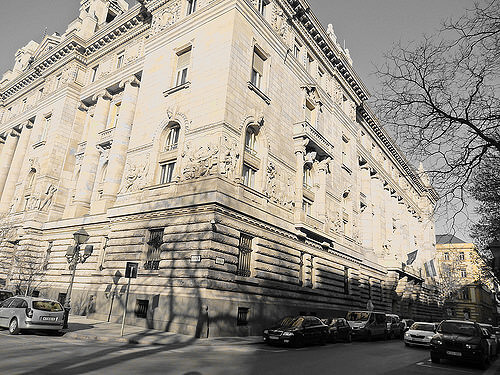 For the last two weeks, the Hungarian press has been filled with headlines concerning the dubious spending by foundations established by the Hungarian Central Bank in 2014. After prolonged legal struggles, which included the adoption of a law that would exempt the funds in question from the transparency rules applicable to public funds and the rejection of said law by the Constitutional Court, NGOs and journalists managed to force the Central Bank to publish the spending of these six foundations. As it turns out, the $1 billion awarded to them was spent on pet projects dear to the chief of the Central Bank, György Matolcsy, as well as to fund projects and enterprises of his relatives, friends, and political allies.

Among the beneficiaries of the Central Bank money was a news portal allegedly belonging to the cousin of Matolcsy; among the items funded were luxuriously overpriced book translations, lavish carpets, and so on. The governor of the national bank refused to consider his resignation, claiming that the degree of his success is demonstrated by the “attacks” he has to withstand.

The case opens up interesting parallels with another scandal from two years ago when the right-wing government of Viktor Orbán mounted a full frontal attack on independent NGOs that were beneficiaries of the Norwegian NGO Fund. Back then, the cabinet argued that even the Norwegian money distributed by Hungarian NGOs to other Hungarian NGOs should be considered public spending and subjected to close scrutiny. In the present day, conversely, it pushed through parliament a piece of legislation that declared the national bank’s money transferred to its foundations was “not public spending”. While the National Tax Authority and other supervisory bodies undertook a two-year-long investigation against NGOs fulfilling vital societal functions, in the case of the Central Bank’s spending they are conspicuously silent.

While Matolcsy transferred millions to his friends and relatives, and spent 160 million forints (approx.. $580,000) on luxurious carpets, the police did not arrest or question him, as it did two years ago with the head of the Ökotárs foundation responsible for distributing sums provided by the Norwegian NGO Fund.

We cannot overlook the deeper social and political implications of this parallel. The spending of public funds by the Central Bank is part of the regime-building activities of the Fidesz government: money injections Fidesz oligarchs, the maintenance of the cultural networks of the party, etc. At the same time, the attack on NGOs constituted an attempt to intimidate and suffocate the active elements of Hungarian society that would be able to hold political authority accountable.