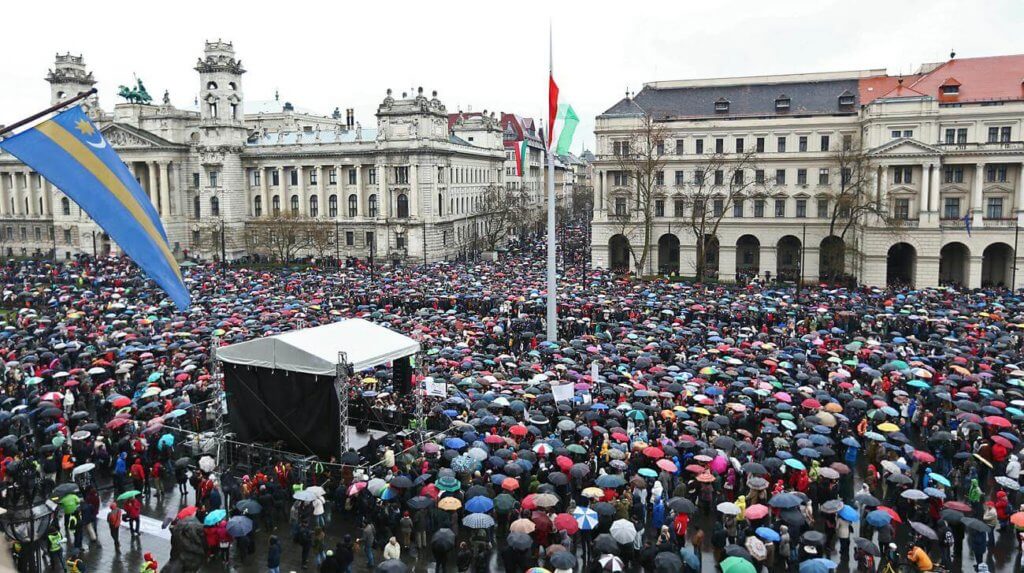 It’s been almost a year since the teachers’ movement began in Hungary, after the Herman Otto High School in Miskolc published an open letter detailing the educational system’s many problems and demanding changes. Thousands signed the letter. In February 2016 there were protests in eight different cities against the government’s educational policy and on 14th February tens of thousands of people stood in silence for five minutes, listening to the rain under their umbrellas. This silence was suggested by Maria Sandor, a nurse who started her own political movement in the health care system, and became one of the defining moments of the teachers’ movement; the mass of people gave the silent protest incredible weight.

“I remember walking home from the protest feeling uplifted and hopeful.” Hopeful that something had started, that now something would finally change. Even if this excitement faded somewhat in the coming months after the protests, a lot was still happening. After the secretary of state for higher education at the time, István Klinghammer, misguidedly mentioned in an interview how tired he was of seeing “these bearded teachers in plaid shirts on TV”, plaid shirts became the main fashion trend not only amongst teachers, but also students and allies of the movement.

At the end of February, following a parent’s suggestion, many students didn’t go to school in solidarity with the teachers. On 30th March teachers in many schools stopped work for an hour as an act of civil disobedience. And on 15th April and 20thApril teachers went on a one day strike, even though in accordance with the strike laws they didn’t receive any wages for that day. Meanwhile, the Tanítanék Movement (‘I’d like to teach’ Movement) and the Civil Public Education Platform (Civil Közoktatási Platform – CKP) were founded, while “Plaid Circles” (named after Klinghammer’s infamous words, the Circles are independently formed groups of students, teachers and parents allied with the larger educational movement) sprung up in many schools.

Nothing had really changed in the educational system.

However, the summer vacation arrived and public attention drifted to the referendum on the refugee quota. Then, following a disagreement amongst members of the Tanítanék Movement on how to handle the refugee question, one of the most prominent members, István Pukli, left the group. Nothing had really changed in the educational system. A meaningful dialogue wasn’t established between the government and the protesters, since the educational round tables called together by the government did not offer any real opportunity for consultation. The government announced that they would close the oft-criticized Klebelsberg Institute, a completely centralized institution controlling the entire Hungarian educational system, and the root of the majority of educational problems, but in reality the institute was only broken up into smaller units. 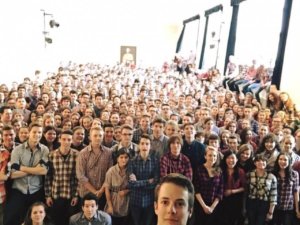 Teachers’ wages were increased but this wasn’t the generous gift the government made it seem, as they had already committed themselves to this raise with the implementation of the so called ‘pedagogue lifelong career model’ years prior to the actual raise. Also, compared to the original promise, the pay rise was humiliatingly low and only covered teachers’ salaries and not those of any other school employees, such as teaching assistants or other faculty members.

What was the teachers’ movement doing during all of this? The teachers who had participated in the protests were attacked politically and intimidated on numerous occasions, and the changes accomplished were so few and far between that this obviously had a demoralizing effect not only on the teachers and students but also on the Hungarian population in general.

In a lot of places teachers aren’t allowed to speak to the press without express permission from the principal and very often this permission isn’t granted.

Pukli’s departure from the Tanítanék Movement also had a negative effect on the public’s perception of the movement, since any unclear insider conflicts are bound to result in a loss of confidence. Despite all of this, the movement continued to organize smaller, performance art type protests and slowly, and with some difficulty, started building a national educational network. Meanwhile, the CKP was hard at work putting together a complex educational policy proposal. According to one of Tanítanék’s elected representatives, Blanka Sulyok, there are many reasons behind the movement’s decision to forego the larger, showier protests in favour of smaller events:
“Right now the situation in Hungary doesn’t allow for tens of thousands of people to take to the streets. Not because there aren’t any problems, unfortunately, but because any opposition is blocked so completely. The truth is that there is serious intimidation in many schools, in a lot of places teachers aren’t allowed to speak to the press without express permission from the principal and very often this permission isn’t granted.
There are actually people whose fixed term contracts weren’t extended after they had participated in a protest. So yes, the teachers are scared. And those, who put on their plaid shirts last year and went out on the street to protest, thinking that they could do this in a democracy without repercussions… Well, there are far fewer of them now. 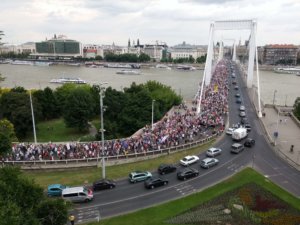 In order for someone to go out on the street and protest, to decide to stand in the rain or snow for hours, they have to be very angry – and you can’t sustain this anger for months on end, not when you have papers to grade and students and classes to teach. Just as you can’t expect a civil NGO to go up against SWAT units with shovels and pickaxes – these are unrealistic expectations. This is why we decided to plan for the long term and try to organize our resources reasonably.”

Meanwhile, the Civil Public Education Platform finished its educational policy proposal, named the Plaid Book, which gives a detailed analysis and suggestions on basic educational policy questions concerning public education. According to the CKP, any progressive and positive professional developments have stopped in the educational system since 2010 (the year the current government came to power), and instead regressive new processes, counterproductive “reforms” have been implemented.

Amongst the government’s most serious crimes against education, the Plaid Book names the lost autonomy of institutions and pedagogues alike, underfinanced educational policy and the growth of inequality and segregation in schools. The proposal also places emphasis on the importance of public consultation – since any educational policy crafted without consultation could not accurately serve the public’s interests (which also explains why the current government’s “reforms” don’t work).

The book could be an exceptional guide for any political party in shaping their educational policy views.

If Hungary ever has a government that wants to build its educational policy on a proposal that was drafted by people who work in education and which takes national experiences and international best practices into account, then the Plaid Book would hand all this to them on a silver platter. At the very least, it could be a very good starting point for a negotiation. Until then, the book could be an exceptional guide for any political party in shaping their educational policy views.

Many people thought that the teachers would overthrow the government. The problem is that that was never their goal. They wanted change in the education system; they wanted a better, less oppressive system. Unfortunately, there haven’t been any palpable changes in this area. However, it would be a mistake to think that the teachers’ movement achieved nothing.

They brought the question of education into public discourse in a way that it never has been before in Hungary. They also brought traditionally left-wing viewpoints into the conversation, such as the problems of vocational education and segregation. Perhaps their biggest achievement, though, was bringing a younger generation into political activism, who fought for their own rights as well as their teachers’ rights. The many 14 to 18 year old students dressed in plaid shirts represented a political act of solidarity that was without precedent. We can be sure that many of those students won’t forget what it feels like to be able to speak up for their own rights, to be politically active, to have a say in the discourse that affects them and their lives, and they will probably want to exercise this right even after school.

Let us also not forget that whenever there were larger protests in the past few years in Hungary against the government’s politics, their support almost always dropped, so even when it feels like there is no point in protesting, it is always worth it!

Their message reached thousands of Hungarians and has real staying power.

Still, it is undeniable that there is a sense of disappointment: the silence of last February wasn’t strong enough to wash away the obstacles set in front of any real change. Since then, there were too many things that we were silent about that should have elicited the outrage of thousands. And yet, the teachers’ movement stands as a bright spot in the political landscape of Hungary in recent years: their message reached thousands of Hungarians and has real staying power. It is not unreasonable to believe that the movement’s achievements will still matter in years to come.