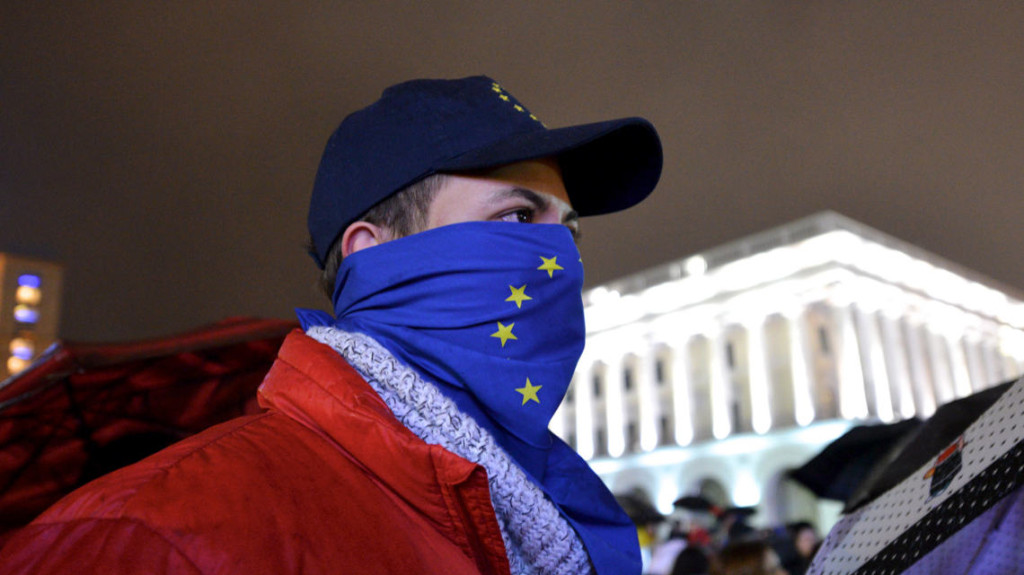 Michał Sutowski: Ukraine didn’t sign the Association Agreement – does this mean that we’ve finally lost the battle for ‘Western’ Ukraine? Is Ukraine condemned to Russian domination, can it proceed further with the ‘bi-directional policy’, or has perhaps nothing yet been decided?

Ivan Krastev: It is still very unclear who has won, who has lost, and how long for. What is clear is that Viktor Yanukovych’s strategy of balancing between the EU and Russia has collapsed. For two decades the major objective of different Ukrainian leaders was to avoid a final choice between Brussels and Moscow but Ukraine’s failure to built a functional and responsive state makes the status quo unsustainable.

It is sometimes said that Ukraine resembles a suitcase without handles: you cannot take it with you but you cannot leave it either. he unwillingness of the country’s leadership to make a final decision is very much determined by the very impossibility of making any. The country is big and important but in geopolitical terms it is also weak and divided. Ukraine is economically dependent on both Russia and the EU. Not only goods but also migrant labor goes to Europe as well as to Moscow. Part of the Ukrainian population feels closer to Russia, part to the EU. The Ukrainian elite is also divided.

This is not new.

What has changed is that Kiev’s preferred strategy of exploiting the tensions between the EU and Russia has backfired. It is now clear that Yanukovych’s strategy of not choosing by changing his position all the time and creating artificial crises has exhausted itself. While the Ukrainian president believed that by not signing with the EU he was performing just one more act of not deciding, many in Europe and Ukraine have read his behavior as a clear sign of choosing Putin. Russia is pressing Yanukovych not simply to turn its back on the EU but to join the Eurasian Economic Union. So, in the next year Kiev will be pressed to do what it has been trying to avoid all these years: to take a side. And here comes Russia’s problem, because though Putin has succeeded in stopping Ukraine from signing with Brussels but, it will be much more difficult to push Kiev to join his own Union. So what today looks like victory can very easily turn into defeat. In the same way that the Orange revolution was not a final choice, the Vilnius roll-back can turn to be Russia’s non-victory.

In your opinion, what is the most important factor behind the Ukrainian government’s behavior? Russian pressure? Ukrainian oligarchs’ interests? Public opinion? Or maybe just the lack of advantageous proposals from the EU?

It is very difficult to know how decisions are taken in a place like Ukraine. In the case of Ukraine you either know everything or you know nothing. It is now evident that even some members of Yanukovych’s inner circle were surprised by the turn of the events. In deciding to sign or not to sign with the EU Yanukovych was mostly influenced by calculations of how to keep power in the next five to ten years. He knows that the country is on the edge of economic collapse and that his government is unpopular, so he was determined to reject any policy that would mean austerity in the next year. The EU neglected this. Secondly, Yanukovych was scared by the prospect of seeing Tymoshenko out of prison. It is difficult to know what Yanukovych dreams of but it is obvious that Tymoshenko is his nightmare. He simply fears that she will do to him and his son what he did to her. Release of Tymoshenko would also signal weakness and could make many believe that it is better to stay and wait for the outcome of the elections. Moscow was very much aware of Yanukovych’s fears, so its pressure escalated the moment Putin realized that Brussels could sign with Ukraine even if Tymoshenko remains in prison. I am sure that Putin was really disappointed by Europe’s lack of principles. But Yanukovych also knows that, in order to preserve his power, he should keep Ukraine outside of the Customs Union. If he joined it, he would become the hostage of Putin and risk the disintegration of the country. So Yanukovych was constantly bluffing, changing his position and trying to decide on the spot what would be most beneficial for him at that very minute. Most observers were convinced that even if Yanukovych had signed the agreement, his signature would not have been meant to be a final choice. It was Putin who changed the game. Putin is not in the business of preventing Ukraine from joining the association agreement with the EU; rather, he is interested in Ukraine joining the Customs Union.

Do you think that the EU has enough soft power to attract Ukraine (its society, its elites), especially without the prospect of membership in the forseeable future?

The current crisis in Ukraine certainly marks the limits of the EU’s soft power. The loss of the momentum for enlargement and the poor performances of countries like Bulgaria and Romania has made many Ukrainians question the EU’s willingness to guarantee economic success and political stability. The EU is too bureaucratic and long-term oriented. What the EU offered to Ukraine was beneficial in the long- and mid-term perspective so long as Putin threatened short-term effects. But paradoxically Russia’s new radical strategy was also the outcome of the success of the Eastern Neighborhood Policy. In the years of Yanukovych’s presidency a kind of EU consensus has emerged in Ukraine. The majority of the population has started believing that the historical place of their country is in the EU, and the majority of business and political elites have preferred to view Ukraine as an EU partner that enjoys a special relationship with Russia. This is the perspective that horrifies Moscow because this is exactly what has happened in Serbia, where the former anti-EU party struck the deal on Kosovo and made the EU their priority.

Does the EU really want to have closer ties with Ukraine? Is it ready to sacrifice its relations with Russia in favor of Ukraine? Who can be the ‘pro-Ukrainian’ party in the EU (besides Poland)?

These days the EU is very inward-looking. Brussels has strategic interest in Ukraine but neither the politicians nor the publics are really pre-occupied with Ukraine. The reason why Yanukovych decided to follow Moscow and not Brussels is to a great extent based on the fact that for Putin Ukraine is of ultimate importance, while for the EU it is not a central issue. But Moscow’s aggressive strategy of pressure on Ukraine made many in the EU realize that the crisis is not simply about Ukraine but about the credibility and the self-confidence of the European Union. The thousands of young people on the Ukrainian streets also made European publics more emotionally involved in the struggle for Ukraine. And while the importance of Ukraine is of course perceived differently in Warsaw and Madrid, what is critically important is that in the last days Germany has made up its mind and decisively joined the Polish-Swedish camp. So, Putin’s success in Ukraine is at the cost of the Russian-German special relationship.

What is to be done – if we want to have Ukraine closely connected to the EU?

The EU is facing difficult dilemmas. The power of the protest wave in Ukraine will not make it possible for the EU to trivialize the conflict and to continue to deal with Yanukovych as if nothing really important has happened. On the other hand, if the EU decides to take the side of the opposition and to cut its contacts with Y, it will make joining the Eurasian Economic Union Y’s only option for survival. So what the EU’s strategy should be depends very much on the development of the situation within Ukraine. It is a cliché but true that it is up to the Ukrainians to decide what is going to happen with Ukraine. The crisis also demands a new Russian strategy.