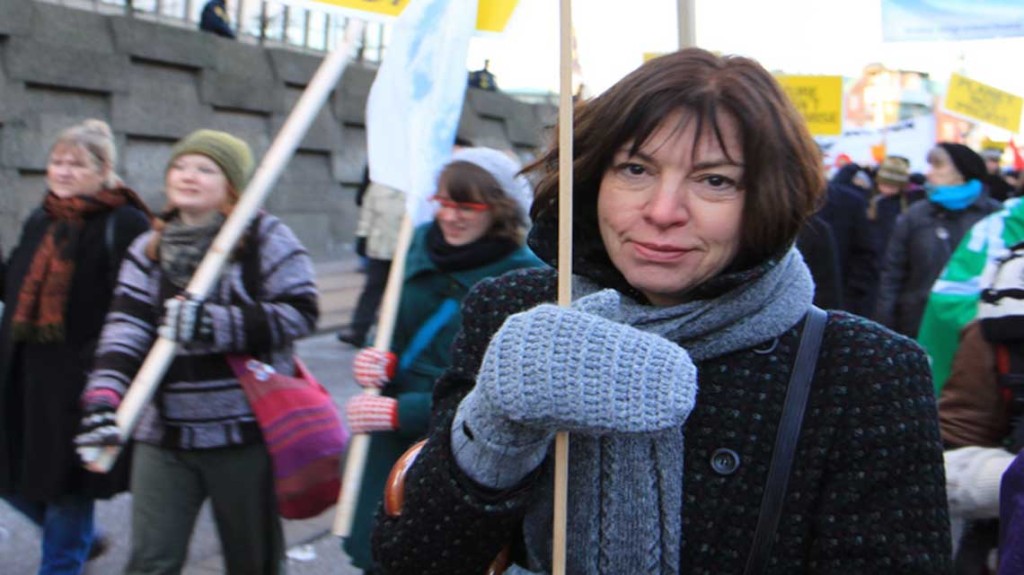 [mark]Bogumił Kolmasiak[/mark]: You are very active on Eastern Policy topics, you have been visiting Ukraine many times during protests and conflict with Russia. How European Union could help Ukraine to build peace and fix their economy? Do you think that Crimea and eastern parts of Ukraine will ever be reunited with Kiev?

[mark]Rebecca Harms[/mark]: I have been travelling a lot of times to Ukraine, especially since the beginning of the Euromaidan protests last year. My last visit to Ukraine was during the parliamentary elections in October 2014 and the election results illustrate well the recent developments in Ukraine. The victory of pro-democracy and pro-European forces is politically wise and promising. But of course it reminds the European Union that it has to live up to its promises given to Ukraine. The European Union has to help Ukraine continue its reform process, and of course tackle the most immediate problems. There is financial assistance needed but beyond that Ukraine also needs political backing against the Russian military aggression on the Ukrainian territory. The crisis goes beyond Ukraine as Russia decided not to accept the peace order in Europe any longer. It won’t be easy to find solution for the conflict in the Crimea. Russia has violated international law and is rushing to change history as well in Eastern Ukraine. According to international law though, both parts have never ceased to be part of Ukraine.

In my country people do not support the European Climate Policy. Our main political parties think that plans of the EU will eradicate our coal industry and in consequence a lot of people will lose their jobs. Why citizens of Poland (where 90% of energy is generated in coal plants) should accept the European perspective? How to convince the Polish people to importance of the climate policy?

We know that all our fossil energy sources are limited – so is Polish coal – and we can see ever more clearly what devastating consequences our excessive consumption of these fuels have on the planet. Especially coal is one of the biggest polluter. During its burning process it emits copious amounts of CO2. According to the International Energy Agency, “no more than one-third of proven reserves of fossil fuels can be consumed prior to 2050”, if we are to stay under the 2°C limit. Accordingly, a large part of the fossil fuels must remain in the ground and investments in fossil energy must be directed towards renewables and greater energy efficiency.[quote align=’right’]As we have learnt from Chernobyl and Fukushima the devastating consequences of nuclear disasters do not stop at national borders.[/quote]

Renewable energy is not only greener and safer, it is also infinite. Furthermore, in combination with improved energy efficiency and energy savings it reduces our import dependency. A further huge benefit is that it has already created half a million new jobs in the EU and could create even more in the future. Reduced fossil fuel consumption also has major health benefits, through lower emissions of pollutants and lower costs of air pollution control. These benefits greatly increase with more ambitious energy efficiency policies and a more ambitious renewables target.

You visited Warsaw during COP19 and you saw that less than 1000 Polish citizens took part in Climate March organised by Green NGO? On the other hand do we have a well organised climate movement in other countries? How do you think, what is the reason behind this situation?

I am positive about the environmental movement in Poland. Over recent years, it seems that the demand for Green politics has been on the increase, especially among young people. People become more and more conscious about their environment and how limited the resources are. People do not put up with everything anymore. In big cities we have seen people going in the streets to protest against coal and demand clean air. But also in the countryside people are becoming more and more active, as such in the small town of Żurawlów, where local farmers staged a protest campaign against Chevron which wanted to start fracking in the area. Whether this will translate into a bigger engagement we will see. As European Greens we will stand as support. 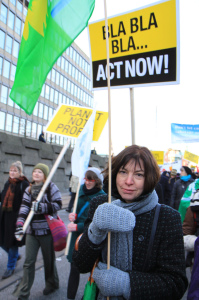 Green parties around the world affirm that one of main points of their programme is promoting peace. Some of them add: “We are pacifists”. And now we have a problem. On the one hand Greens should vote for cuts in military budgets and against military interventions. But on other hand we see saddening examples like Ukraine, Crimea and the rising Islamic State, where some kind of military intervention may be needed in the foreseeable future.

The pacifists were a major group when the Greens formed a political party in Germany. And we still uphold pacifist values: war and military can never be the solution to a crisis. Nonetheless, our green position in Germany during the Kosovo conflict underlines that there are exceptions to this fundamental idea. We saw a responsibility to protect victims of ethnic cleansing. Unfortunately, there might be situations when negotiations fail and people are at an immediate risk of dying. We then have to strike the right balance between our pacifist core and a military intervention as a last resort.

Green Parties protest against building new nuclear power plants. You started your political activity with the anti-nuclear movement. Currently the Polish government has launched a campaign and they keep on insisting that nuclear energy is clean, good for environment (at least better than coal) and building new nuclear plants is the future for our energy sector. Can we really base on the so-called renewable resources only?

Green movements all around Europe protest against development and against exploitation of shale gas. You argue that shale gas production pollutes water, destroys houses and nature. But in the media discourse in my country journalists convince that it is a great opportunity for our energy sector, job market and to secure energy independence, especially from Russia and the undemocratic Arab States. Should we really stop supporting the very idea of developing the shale gas industry? Maybe economic and political arguments should prevail?

During the last decade the US experienced a downright shale gas boom lowering global gas prices as well as offering an alternative to Russian dominance as the major gas provider (more information HERE). Yet, compared to North America, European gas basins are considered to be smaller and technically more difficult to access. Previous estimates already had to be reduced considerably while the exploration rate is slower than expected. Costs are huge. Major companies, including ExxonMobil, Marathon Oil, ENI, and Talisman Energy, pull out of Poland.

[quote align=’left’]Assessing environmental impact should be a bare minimum, while shale gas companies should be held accountable for any damage caused.[/quote]Betting everything on the shale gas is also risky and unsustainable, as it is distracting energy firms and governments from investing in renewable sources of energy, and encouraging continued reliance on fossil fuels. There is a danger of getting trapped.

There is a sufficient number of well-known risks to ban the extraction of shale gas. Though if that is not materializing, there needs to be adequate regulation at the European level restraining this highly risky technology. Assessing environmental impact should be a bare minimum, while shale gas companies should be held accountable for any damage caused. Also local residents should have a say and be involved via a participatory process at an early stage.
Shale gas is simply not the solution to neither EU nor Polish energy, environment, and climate challenges: So we need to ask ourselves the question whether we really want to risk our health just to prolong (unsustainable) dependence on yet another finite, fossil fuel?

European elections showed that far right populist parties are getting stronger. They hold in contempt our European values, and want to dismantle the European Union, attack immigrants, and present false, yet popular solutions. Will the EU survive?

The growing influence of far right populist parties is indeed worrying. We have to defend the European Union against these forces. The European Union has always stood for freedom and democracy. It also stood for the prospect of a better life, and a viable future. That promise must be taken seriously again. Especially Greens have to offer an alternative to some policies which might have caused some discontent of European citizens.

What do you think about protest movements like Occupy and Indignados. Some people who had been engaged in those kind of movements now have established political parties like Podemos in Spain. Are they partners or opponents of Greens?

These movements are certainly not opponents. Their demands are often very similar. For example, the fight against youth unemployment, social hardship or stricter banking regulation is part of our green political program as well. However, whether these movements can be integrated into our political group in the European Parliament depends on their specific programs and their willingness to join forces with us.

Do you regret that Alliance ’90/The Greens did not form the coalition with Die Linke and SPD? A lot of young Greens waited for this move. But party said “No!”. I know the historical issues: Die Linke are post-communists, etc. Are the social, environmental and economic programs of these parties similar or different?

[quote align=’right’]Especially Greens have to offer an alternative to some policies which might have caused some discontent of European citizens.[/quote]At the federal level in Germany, there was no possibility to form a coalition of SPD, Linke and Greens after elections in autumn 2013. In fact, CDU and SPD were quite determined to form a grand coalition and according to surveys it corresponded to the majority of voters’ opinion. However, one year after the federal elections, we are facing a more nuanced situation regarding Greens participation in governments on the so-called Länder level. While there are SPD-Green coalitions in several Länder, we also have Green-red, CDU-Green and currently, Greens are in coalition talks to form the first Linke-SPD-Green government in Thuringia.

Nonetheless, the Linke is still quite different in many regards. Especially on the Ukraine conflict we have very diverging opinions. The Linke is far from blaming Russia for the continuous escalation in Ukraine. On the contrary, according to many of them, the European Union has provoked Russia to protect its sphere of influence.

The article was originally published in Polish on krytykapolityczna.pl