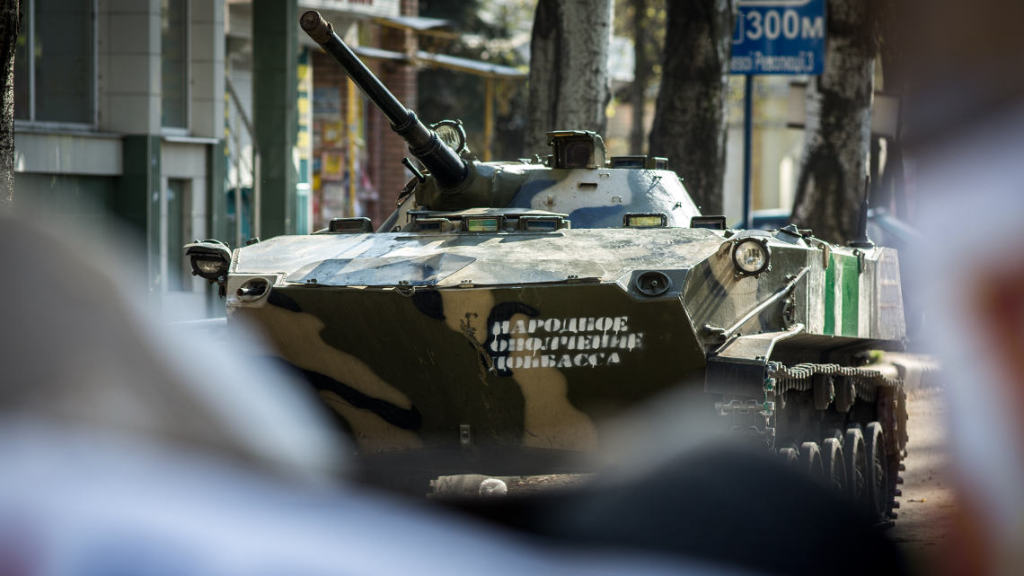 [dropcap]T[/dropcap]he story of the war in Ukraine is based on false symmetry: „If there is civil disobedience, a rebellion leading to the abolition of the government – no matter how disliked and corrupt it is – it equals civil war”. We are persuaded that civil war is an OBVIOUS consequence of civil protest. This message appears to be fairly effective as it is conveyed not only in words, by TV or opinion-making press, but also by rifles, tanks and surface-to-air missiles. The content of this message is at the same time the medium through which it is conveyed.

How is it possible that we – the left – believe this? There are several asymmetrical arguments evoking this false sense of symmetry. We’ve heard it many times, so now let’s look into them.

Someone may answer that the main aim of anti-Maidan was similar – pro-Russia groups might have also fought for the freedom of expressing opinion. Yet in case of the contemporary Russia and its supporters, as we all know, expressing opinion is quite hard, as the only the right opinion can be expressed. Namely, the one with its origins in Kremlin. And Kremlin – through its TV – claims that the fascist junta from Kiev will soon start to eliminate the Russian speaking population of Ukraine using the NATO weapons. Expressing opinion won’t suffice. One needs weapons to be able to express opinion.

[quote align=’left’]There is no analogy between violence escalation processes during Maidan and anti-Maidan.[/quote]Another false symmetry is about violence and the right to uprise. When the first armed militias appeared in Donbass, their arguments may have seemed convincing. They claimed that they were not the first ones to hold weapons – they only symmetrically answered to the alleged armed abolition of the legal government in Kiev. The government that kept exploiting and abusing the residents of Eastern Ukraine as well as the rest of Ukrainians – and it’s the only true symmetry here.

There is no analogy between violence escalation processes during Maidan and anti-Maidan.

In Kiev the government was the first one to use violence against citizens. After the riots, during about six weeks, on Maidan prevailed non-violent forms of protest – despite growing police opression. Violence erupted after passing the law that actually delegalized all displays of civil disobedience. First victims among the protesters were immediately – but not among the police. Another month of rapid escalation of the conflict passed before some of participants of the protest – in response to the growing number of victims – reached for weapons. Yanukovych’s regime collapsed within few hours after the first shots were fired at the police that immediately withdrew. It doesn’t mean that the use of weapons is justified. It isn’t – neither in case of the insurgents, not in case of the state. And it’s another rare example of symmetry that should be acknowledged.

Contrary to that, anti-Maidan logic immediately led to armed struggle It wasn’t caused by repression of the protest by the new authorities whatsoever. Armed uprising was the only way to rescue anti-Maidan from gradual, but unavoidable collapse.

When I visited Donetsk in March, I saw the movement doomed to failure. Anti-Maidan activists barely managed to encourage several thousand people to attend their weekly meetings – in an aglomeration inhabited by several millions. In their protest camp by the statue of Lenin there was only about a dozen of people. I’m not trying to mock them – I just claim that there was no mass support comparable to the support for Maidan. This movement had no chance in non-violent form.

[quote align=’left’]The role of Russia in inciting and supporting civil war in Ukraine is undeniable. However, blaming only Russian imperialism for the conflict would be simplistic.[/quote]The decision to pass to the next stage was then taken. In April armed and professional unidentified people wearing green military outfits took over a few police stations and gave weapons found there to those who wanted it. Anti-Maidan’s popularity among the enthusiast of weapons immediately rose and so did the political weight of anti-Maidan – also on the international ambience.

Here is another false symmetry: „If they are allowed, then why aren’t we?”.

The role of Russia in inciting and supporting civil war in Ukraine is undeniable. However, blaming only Russian imperialism for the conflict would be simplistic.

The sins of Russia cannot obscure the fact that its imperialism is not the only one in the world – it’s just takes the most trivial and the least sophisticated forms. Russian imperialism is reactionary – driven by logic based on resentment, revenge and request for „right to symmetry”. It’s an instinctive, primitive reaction to the Western imperialism that Russia reflects copying its crimes. Russian message is: if the West can break all the rules, even the ones established by itself, and destroy Iraq with impunity, then why Russia cannot destroy Ukraine with impunity? If the West can support armed rebels all over the world, why then Russia cannot support the armed rebels in Ukraine?

That’s the logic behind Russian invasion on Ukraine and this logic reassures also the West that seems to understand it this way: „ Ok, we’ve screwed up. We screwed up with Iraq and Syria. So now it’s Russia’s turn. Symmetrically. It will be fair, at least.”