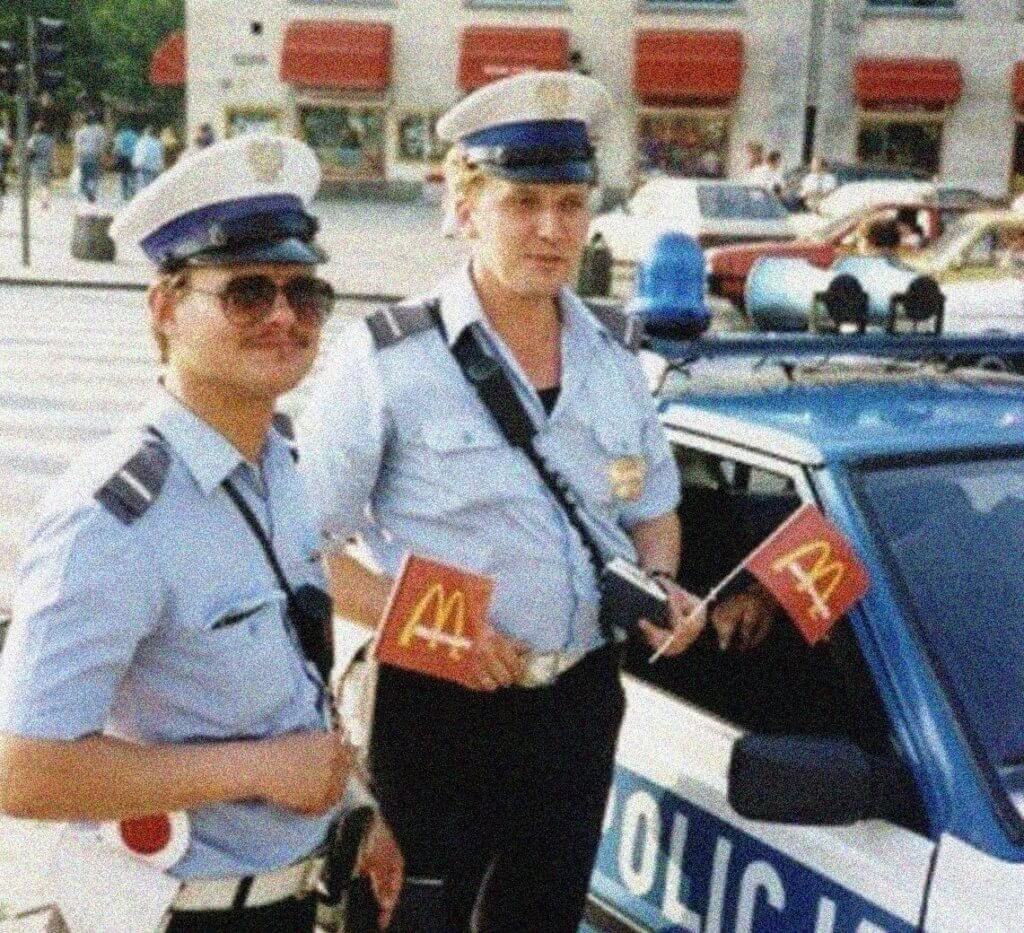 Polish police officers at the opening of the first McDonald's restaurant in Poland in 1992.

A 1988 literary conference, held in Quelez Palace, Lisbon, resulted in the New York Times posting a headline titled “Soviet Bloc Writers Clash at a Conference.” In attendance were zealots loyal to the idea of Central Europe, alongside Russians and contemporary stars: Salman Rushdie, Susan Sontag and Josef Brodsky. Debate, quite predictably, erupted between the zealots and the Russians.

Zealots loyal to the idea of Central Europe said what they always do: that the East is kidnapped by the West, and the only thing stopping the East from achieving liberal democracy were Soviet tanks.

Zealots loyal to the idea of Central Europe said what they always do: that they – the zealots – are an East kidnapped by the West, and the only thing stopping the East from achieving the entelechies of liberal democracy were Soviet tanks. They further argued that they were actually more Western than the West: the West was only descending into commercialism, while Central Europe was upholding real, European values.

Irritated Russians (Josef Brodsky, Tatyana Tolstoya) complained about the “apologetic tone” and purposeful isolation of Central Europe, as if it were “a bad thing to be an East European.” “Your project,” they claimed, “is clearly symbolic and has no realistic substance. Abandon the blaming of us – writers – for tanks, because we aren’t the ones who sent them. You should focus your attention on literature, because what else do you have left, seeing as you don’t have independence?”

These comments – admittedly somewhat patronising at times – infuriated the Central European zealots, for it seemed to assert that Central Europe exists as such simply because they did not and do not want it to be Eastern. Adam Zagajewski, a Polish poet and panellist at the conference, argued against the Russian charge, stating that their stance on such independence was merely “some sort of Russian outlook on civilisation,” and that “with regards to culture, Central Europe may be a less artificial product than the Soviet Union, as a cultural concept.”

Zagajewski was right: Central Europe does exist, although not how he had hoped.

Nearly thirty years have passed since this conference, and only today can we admit that Zagajewski was right: Central Europe does exist, although not how he had hoped. For years, the idea of Central Europe was gathering dust in the corner of the living room of the intelligentsia, rarely brought to attention by a handful of academics and writers. It crept out of that corner in 2015, due to the migrant crisis, in the form of its own caricature. It crept out and has since been building walls, whilst hiding behind Christian values.

Over the last quarter of a century, this was more or less the case: Poland, the Czech Republic, Slovakia and Hungary equally didn’t give a damn about each other. In the 90s, they supposedly had the same goal – to join NATO and the EU – but they never really had each other’s back. Every country tried to individually prove themselves before Europe as the most European, the most transformed and developed than the others. After 2004 – when the European dream came true – it was even worse. The Visegrad Group proved to be utterly useless as a political alliance. No one even drove to Balaton (a popular touristic destination during communist times) anymore: representatives of the newfound Polish, Czech, Slovakian and Hungarian middle-class met during the charter, during last minute holidays, or at Western corporate events.

In 2015 at anti-refugee marches, Visegrad citizens attacked refugees in the same places from which they had fled a few decades beforehand.

In 2015 they met again – this time at anti-refugee marches. Visegrad citizens attacked refugees in the same places from which they had fled a few decades beforehand, such as at the Budapest railway station Keleti. It was actually from the Keleti railway station that the old-new Central Europe crept out.

Xenophobia then spread amongst the zealots loyal to the idea of Central Europe, as was the case with Hungarian writers George Konrad and Imre Kertesz. This troubled enemies of the Berlin wall, valued intellectuals, and survivors of the Holocaust. “We must protect the borders of Schengen from this tsunami,” said Konrad, adding “walls are only walls,” drawing examples from Israel, Mexico and the Great Wall of China. “Muslims are infesting, overtaking and ruining Europe,” warned Kertesz in his last book. To clarify, the point here is not that the problems caused by migration should be avoided in discussion, but that the language used to discuss it is hateful.

Xenophobia and hypocrisy, however, are just the beginning of the new Central Europe. The solidified regimes of Poland and Hungary go hand in hand with cultural counterrevolution. This signals the end of Western values; throw the dark-skinned gays wearing anti-pollution masks into the backburner. Send women back to the kitchen, writers back to quills (as advocated by communist propaganda in Poland), and inhale the foul smog the same way our ancestors did. Farewell, broken Europe.

This hypocritical and xenophobic project is only growing: the Czech Republic, Croatia, and Romania are yet to be convinced by many of its elements, although they have already accepted many. However, such issues are not so important; inconsistency has always been an inherent feature of Central Europe. Complexes were mixed with aspirations; weaknesses of witnesses with the hysteria of victims; dreams of modernity with fear. And what about cultural counterrevolution? Was there some sort of cultural revolution in Central Europe?

There is no method to this madness. The new Central Europe remains an unachievable project within the perspective of international politics. Although the cursed 2016 was ideologically on hand for some governments of individual countries, its lowest points (Brexit, Trump, and hybrid wars in the Kremlin) also pose real dangers. Central Europe knows that it never has been and never will be able to deal with any real danger. It can only stand by and watch the vacillations of geopolitics, while smugly taking the moral high ground.

Central Europe knows that it never has been and never will be able to deal with any real danger. It can only stand by and watch.

However, for now, they’re focusing on slogans over which Trump supporters rejoice. Everything is the way it was during the Soviet era, only reversed. There is inconsistency, stubbornness, and dreams of Central European alliances (of which each country would like to be the leader). Banners no longer state “We are Europeans,” but rather “We are not Europeans.” Moscow’s role in the collective imagination has been replaced by Brussels, and Stalin has been replaced by NGOs dealing with Human Rights which collaborate with Angela Merkel.

Thus the West kidnapped by the East is now shouting that it is the East kidnapped by the West (that said, the word “East” is still considered taboo, so they invented – or rather borrowed– a synecdoche from the Kremlin ideology of russkiy mir: “traditional families” and “Christian values”). It screams that the only thing preventing it from achieving liberally idealistic principles is the structure of the EU. The West also claims it is more Eastern (traditional, Christian) than the East, because Putin is a dictator who, above all, is evil, whilst Central European dictators are good. And so swings the chimeric, Central European pendulum. Regardless of which side it is on, it has a single goal: to ensure its citizens do not discover the fact that they do not matter.

Intellectuals, decimated and weakened by the wave of populism in Western Europe, will not challenge each other as the Russians once did

If the New York Times survives a few more years with Trump, it’s possible that they may publish an article titled “European Writers Don’t Clash at Conference.” Writers from Central Europe – the worthy ones, delegated by the Ministry of Culture – will echo these sentiments. Intellectuals, decimated and weakened by the wave of populism in Western Europe, will not challenge each other as the Russians once did. They will nod their politically correct heads in agreement and ponder whether any lessons can be derived from the evolution of Central Europe – before dark times came to the continent.