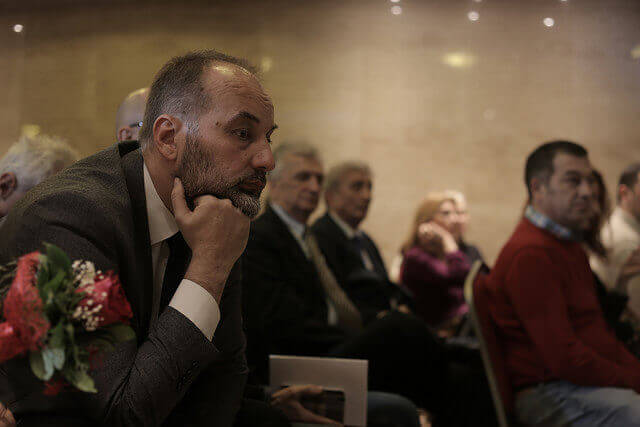 This year Serbian citizens living in Poland will be able to vote at their embassy in Warsaw, due to enough people formally applying to vote for a polling station abroad to be opened. For those who do not follow, it means little, but for Serbians living in Poland it may positively signify that there is an increased enthusiasm amongst their compatriots about casting their ballots in the election. The last time the Serbian Embassy in Warsaw received enough applications to open a polling station was in 2008. So why is it different this time? For the fact that it signifies hope (albeit faintly) for positive changes in the Serbian political landscape.

The positive changes in consideration are particularly associated with Saša Janković, who is both an old and new face in Serbian politics. A prominent lawyer, journalist, and human rights activist, he served as the Protector of Citizens (Ombudsman of Serbia) for ten consecutive years and resigned from his post to run for president in the upcoming April election, primarily running against Aleksandar Vučić, the incumbent Prime Minister of Serbia. Several years ago, Janković, while in his position of Ombudsman, came into conflict with Vučić after Janković drew attention to the negligence and misconduct of state institutions toward citizens. This resulted in a smear campaign against him. Nevertheless, in November 2016, 100 prominent Serbian intellectuals appealed for Janković to run for president. Civil society organizations also endorse him, as well as several opposition parties and movements, including those on the right and left, social democrats, and liberals. Though differing in ideology, they seem to share the view that there is a strong need for the protection of state institutions in Serbia, and they believe Janković can do it.

During his speech at the rally in Belgrade on 19 February, 2017, Janković – who does not identify himself with any specific political ideologies or platforms, but instead with common human principles – stressed the importance of issues on those things in which he believes or considers needing change. Namely, he addressed the persistent shortcomings of state institutions in their relations with citizens; equality of all citizens of Serbia, whatever their background or ethnicity. Healthcare, education, and society in general need to recover from the burdens of living under an ineffective government for years. State institutions should re-gain their value and meaning. The constitution should be respected and have real effect. He also promised to fight corruption and grant no forgiveness to those who commit crimes against the state and its citizens.

Healthcare, education, and society in general need to recover from the burdens of living under an ineffective government for years.

State institutions in Serbia – and politics in general – seem to indeed require a reloading. Since 2012 the political scene has been heavily dominated by the Serbian Progressive Party (SNS), which since has held majority seats in the Parliament. Its leader, Aleksandar Vučić, is especially influential and has fully overshadowed his longstanding party-comrade and current President of Serbia, Tomislav Nikolić. Vučić, who became Prime Minister in 2014, consolidated major political resources (and thus power) into his own hands, a situation that remarkably resembles Serbia during Slobodan Milošević’s rule in the 1990s. This fact might not seem too surprising, however, considering Vučić’s political background (namely, his high-ranked position (Secretary General) in Vojislav Šešelj’s Radical Party in the 1990s and his work as the Minister of Information under Slobodan Milošević in 1998-2000). As the Minister of Information, Vučić initiated the Draconian Law on Information which resulted in many media outlets shut down. Today, numerous media loyal to Vučić, both printed and televized (the latter including state television and the major private network, Pink TV) keep him omnipresent, as well as using tactics to manipulate the population by presenting often disputable information in a repeatedly sleazy manner. One way or another, Vučić has, until now, remained the master over the Serbian situation, holding his power tightly, striking a note that he will remain in power for longer.

Although the President of Serbia is formally short of power and responsibility, as compared to the position of the Prime Minister, becoming President would hardly make Aleksandar Vučić less prepotent. He would still be able to keep his overarching influence, especially over the government, given the fact that the Prime Minister is nominated by the President and confirmed by the Parliament. Additionally, being directly elected, the President continues to carry substantial authority over state policies and lines. Not the least important is the circumstance that the President is the Commander-in-Chief, a power that gets a special undertone in the context of Serbia’s recent violent history combined with Vučić’s background, in addition to having overall power over an inconclusive state of democracy in the country. Holding the President’s position could also be a win-win combination for Vučić: within the next few years, Serbia will face a number of painful decisions in relation to Kosovo’s status, and it will be the government (read, Prime Minister), not the President, who will have to render such decisions and bear the full formal responsibility. As the result, such a government will most probably fail, thus serving as a scapegoat, while the President will remain intact.

This election is notable not only because of new characters like Janković, but also because this is the first time in modern Serbian politics that there are opposition candidates running their own agendas.

However, the fact that the economic and social situation is very poor in Serbia could potentially work against Vučić on his road to the presidency: the unemployment rate for the last quarter of 2016 amounted to 13%; average net income per person was slightly over RSD 40,000 (approximately EUR 320) in January 2017; and birth rate in 2015 was almost 40,000 persons negative. Given that the total Serbian population is slightly over 7 million, and that many young people keep leaving the country to look for better life options abroad, the demographic situation in Serbia becomes more and more alarming, dragging the economy and social sphere down. At the same time, Vučić’s pre-electoral over fifty-percent ratings suggest he still enjoys widespread support among the population, which does not necessarily mean that people are actually happy with the situation in the country (rather to the contrary). Nevertheless, it is hard to expect Vučić to lose considering that, according to the polls, he holds an advantage of more that 40 % over other candidates, including Janković. At the same time, trusting opinion polls could prove to be void, as demonstrated via the 2012 presidential election: polling agencies were very inaccurate in their predictions of results, giving massive odds to Boris Tadić instead of Tomislav Nikolić. And the opinion polls are not immune from any miscalculation this time around, either. Furthermore, traditionally there is significant election abstinence in Serbia, which could possibly be changing now due to the emergence of new running candidates like Janković. Regardless, even if this election is not about Janković’s winning, it is definitely about an opportunity for him, together with the rest of opposition, to consolidate and make a breakthrough for next year’s Belgrade Mayor and Belgrade City Hall elections.

Though the outcome of the vote seems predictable, this election is notable not only because of new characters like Janković, but also due to the fact that, for the first time in modern Serbian politics, there are opposition candidates who are running their own agendas without major opposition parties nominating and/or pushing them forward. The effect of this novelty is still to be seen. What can be seen right now, however, is a gleaming light that gives possibility to a political reload in Serbia, either now or in the near future. Given Janković’s background, knowledge, and previous accomplishments, he seems to be the most capable of all oppositional candidates to transform this gleaming light into a distinct light, a light at the end of the tunnel.

Tetiana Poliak-Grujić
Tetiana Poliak-Grujić is a freelance scholar currently based in Warsaw. She focuses on human rights in the Balkans and Eastern Partnership countries. She has observed elections in a number of countries, as well as having worked for an international law firm in Kyiv, Ukraine.
> see other articles <