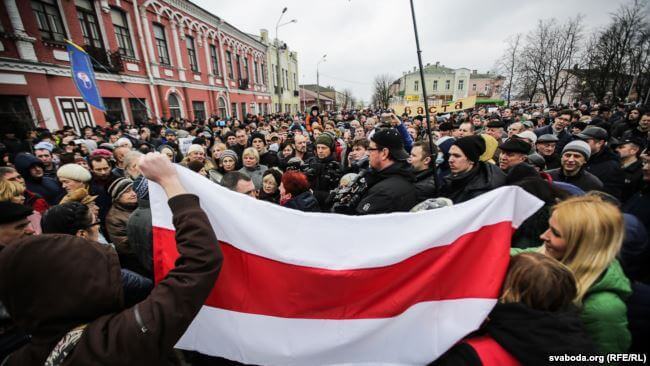 It has been almost a whole month of public demonstrations in Belarus. The mere materialisation of these protests, which have taken place in a dozen of participating regional towns with hundreds, even thousands, of protesters, is unusual for Belarus. Public protest is a rare phenomenon here, as Belarusians largely perceive themselves as tolerant and passive. But the wave of public upheavals that is currently rolling across the country dispels this stereotype and can have unexpected effects.

There are several lessons one can draw about it from the evolving situation.

First, the tax placed on the unemployed was the culprit that triggered the demonstrations.

The decree was aimed at taxing those who hide their wages, but instead it stirred up the society at-large, provoking public protests across the country.

Two years ago, in April 2015, a new presidential decree was established, focused on preventing social dependency in Belarus by installing a tax on those who remain unemployed for more than six months. An equivalent of $240 was to be paid yearly in return for access to amenities such as public health care and education. This decree, labelled as a parasite law, was aimed at taxing those who hide their wages, but instead it stirred up the society at-large, provoking public protests across the country since its first deadline in mid-February 2017.

Second, the protests were actually sparked by the dire economic situation in Belarus.

In January 2017, President Aliaksandar Lukashenka amended the decree to shift responsibility to local authorities, enabling them to make exemptions for groups or individuals. But protests continued. In March, in an attempt to save face, Lukashenka froze the law for one year and threatened organisers with consequences. But this step didn’t have much influence. People in regional towns marched against impoverishment, demanding the president’s resignation.

How can demands be made without the instruments necessary for influencing decision makers? The only decisive call to action is protest.

Lukashenka’s rule since 1994 has been sustained through a perceived social contract that guarantees an economic minimum – the vernacular shot and a pork rind, in Belarusian “чарка і шкварка” – and peace and stability in return for loyalty to the president and his system. So long as people can make ends meet economically, they won’t take to the streets. Moreover, how can demands be made without the instruments necessary to influence decision makers? The only decisive call to action is protest.

Protesters are very angry and don’t shy away from independent media to talk about their attempts to make ends meet. As the country faces its first serious recession since the mid-1990s, the Belarusian government has continuously failed to recognise the current economic crisis and the necessity of structural reform. Meanwhile, incomes continue to decline, wages are cut, and the middle class is becoming poorer.

At the same time, demonstrations have been unheard of since summer 2011, when after devaluation of the national currency to 56 percent (and other dramas of the domestic economy) Belarusians took to the streets for several consecutive Wednesdays. As demonstrations have to be authorised, people gathered without any slogans and simply clapped their hands. These so-called “silent protests” came to a close as plain-clothed policemen violently arrested hundreds of the clapping participants. Subsequently, the economic situation improved.

Ironically, whereas Lukashenka believes that society is not ready for change and reform, he himself is ready for them.

Ironically, whereas Lukashenka believes that society is not ready for the changes and reforms people are demanding today, he himself is ready for them. However, comprehensive reforms are very unlikely, as they would mean the regime was losing control over the country. Thus the regime will most likely target protesters oppressively, rather than placing focus on healing the wounds that have caused their protest.

As a fourth point, protests take place against the background of a relaxed political atmosphere. But the screws are already being tightened to stifle the upheaval.

Belarus saw a cycle of repressions and slackened reins due to multiple attempts of the government to abstain from violence against its opponents in return for enhanced cooperation with the West to balance its political and economic dependence on Russia. The previous liberalisation period from 2008 to 2010 ended with demonstrations and their brutal dispersal. In 2015, another era of liberalisation began after the release of all prisoners considered political, and the European Union abolished almost all of its sanctions against Belarus. Since then, dissidents have only been subject to fines, not arrests.

Since 2015, dissidents have only been subject to fines, not arrests, but this now they are starting to be arrested.

This thaw has now ended with at least five dozen civic activists and opposition leaders being arrested during the protests and tried. Even journalists have been briefly detained (as many during these weeks as during last year all together). This comes in handy, as the month of March has several traditional street actions, but with jailed leaders excluded and a rising fear of arrest, it’s very possible that these mostly non-political protests will subside and stop.

Just as the 2011 silent protests united various peoples (when people clapped together whether they were for controlled or market economy, Lukashenka, or the opposition), current demonstrations are uniting people with different experiences again, without the need to agree on a political agenda. At the same time, street actions would need leaders to bear fruit, and protesters remain protective of those who at-risk of being arrested and rely more on experienced, logically civic activists who hold anti-governmental views.

As a sixth remark, there are virtually no signs showing that Moscow is meddling in these public outcries.

Despite state-controlled media blaming Russia for the current state of instability, there are no signs that these demonstrations are in promotion of a Russian agenda.

Whereas Belarusian state-controlled media blames Russia for interfering into the internal affairs of Belarus and messing with its stability, there have been no pro-Kremlin slogans, no activists promoting a Russian agenda. At the same time, Moscow, the closest political ally and economic partner, became its biggest threat economically, politically, and military. But it’s good news to see that Russia doesn’t (yet?) have a plan or the capacity for a Ukrainian scenario in Belarus.

As a closing statement, I put forth such: The current explosive atmosphere demonstrates that Belarusians are actually aware of what is really going on. They are not supportive of the current regime, and this gives hope.

Angry protesters are well aware that state-controlled electronic media doesn’t tell the whole truth, and for this reason they chose to speak openly to independent journalists who covered the demonstrations. By taking action to the streets, Belarusian society is highlighting that it knows Belarus’ election results are manipulated: Making a statement is best achieved through mass public demonstrations. The people are calling for Lukashenka’s resignation, as he is the author of a failing economic system in which Belarus relies on cheap gas and subsidies from Russia.

The atmosphere in Belarus, where political opposition is almost extinct and civic organisations have limited access to the general public, is currently quite explosive. Belarusians might not take to the streets to protect the rule of law, but they are prepared to protest against the manifold rules of the regime. And that’s definitely a dangerous situation for the current regime.

Maryna Rakhlei
Maryna Rakhlei is a program officer at GMF's office in Berlin, where she analyzes regional developments in Eastern Europe and is part of a team assisting civil society in Belarus. Before joining GMF, Rakhlei covered foreign relations for the Belarusian newswire Belapan in Minsk, where she maintains extensive contacts. She also wrote for the German newswire DPA and blogged for EuObserver. She studied linguistics in her hometown of Minsk and European Studies in Berlin. Her working languages are English and German, in addition to her native Russian and Belarusian.
> see other articles <