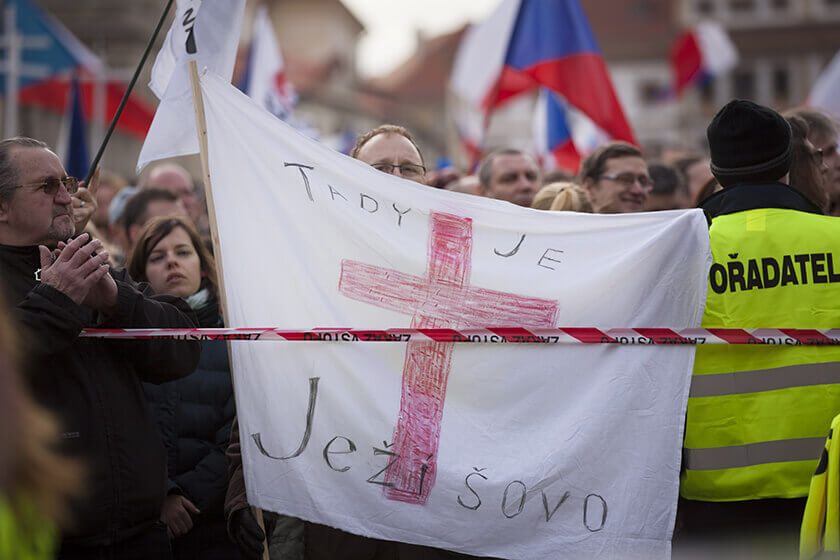 Two years ago, my colleague Lukáš Rychetský and I wrote a text called “The Sinister Silence of the Elites”. The article criticized the growing racist consensus in Czech society and the silence of those who should be protesting against it. This situation is repeating itself today – with the difference that the smash hit of the past year has been hatred towards refugees. What does this demonstrate? Czech society is constantly proving that it does not know the meaning of the word solidarity and openly hates those who are less privileged.

We’ll win the elections this way

According to the Police Presidium, the number of racially motivated attacks in the Czech Republic grew by 100% in the first half of 2015. People with different skin colour are afraid for their health and the safety of their families. One woman was attacked on a tram – the attacker pushed her down the steps and then kicked her in the head. The reason? The lady is of mixed race. Another woman, whose husband comes from Africa, described the worsening situation in the following way: “I more or less didn’t use to have these problems. Now I might be standing in line with my children in front of an ice cream stall and a man standing behind us will say: ‘Fuck off, you fucking blacks!’”

Contemporary Czech society is – together with the cult of sharp elbows and harsh individualism – extraordinarily selfish.

Racism is on the rise, but that is not the end of it. Attacks on homeless people are also increasing – passengers have been reported to throw them off of trams. Allegedly they are bothered by their smell. These people, of whom there are tens of thousands in the Czech Republic and who are dying in the streets daily, are no longer just a “necessary part” of everyday realities, but are the target of active hatred. And our “decent” fellow citizens can go very far. I witnessed one of the most absurd sights in the case of an older Roma wheelchair user, who was begging on a Prague street. Some passers-by told him off and ended their outburst with the words “Don’t pretend!” or “Go and work, you’ve got healthy hands”.

On the other hand, the Czech Republic is no exception in this. If we remain on the topic of refugees, racism is on the rise also in neighbouring Germany. Only in the first quarter of this year, more than 300 attacks on refugee shelters were recorded, including arson attacks. But there is a big difference: last year, German society experienced perhaps the greatest wave of solidarity with refugees in modern history. In comparison, most Czech politicians feed xenophobic sentiments (and credit should be given to the few exceptions who do not). I managed to speak to several analysts and representatives of Czech political parties. In answer to my question why party presidiums do not distance themselves from the racist remarks of their MPs and clearly condemn the wave of xenophobia, they replied more or less the same way. One summarized with a mischievous grin on his face that “We’ll win the elections this way”.

The problem is that in such a case, Czech politicians open the way to fear and moral panic. And they don’t seem to care. Moreover, those who want to appear socially-oriented – often together with certain show business stars – will repeat: first help poor Czechs, and only then refugees. On the one hand it sounds nice. But there’s a catch. We should have no illusions that most of those who are suddenly expressing empathy with the Czech poor mean their words seriously. First of all, the “Czech poor” is quite an abstract term, which for instance does not extend to, in the eyes of most critics, the above-mentioned Roma wheelchair user (he may speak Czech, but for a Czech he’s slightly too “tanned”). But not even the racially pure poor have won.

It would surely be nice if politicians told people: before we help the refugees, we’ll raise your minimum wage and pensions by a half. But something like that remains in the realm of fantasy. After all, there has been no movement called “We don’t have impoverished pensioners in the Czech Republic” – unlike the really existing “We don’t want Islam in the Czech Republic”. Those who hate refugees will, often in the same breath, send those in need “to work”, and if you happen to be a philosopher and work in an NGO, you are nothing more than a parasite. Czech predatorial capitalism has been instilling such values in people for years.

The socially defeated Czech majority is made a fool of every day instead of having its problems solved.

If we refuse to help a handful of refugees, we will hardly find the resources for hundreds of thousands of impoverished Czechs. But none of this has come out of the blue. Contemporary Czech society is – together with the cult of sharp elbows and harsh individualism – extraordinarily selfish. Our values are shaped by the social environment we live in and the Czech environment is more and more ruthless. Not only are Czech salaries not even close to a standard Western level, but our minimum wage is amongst the lowest in the EU. Even though many Czechs have still not fallen below the poverty line, those who do have hard luck – the OECD has calculated that a single parent with two children would escape poverty only if they worked sixteen hours a day. It’s not necessary to further elaborate that in this sense, we have long been in the lead over other civilized countries. There has long been no solidarity with the truly poor here.

What is the connection with hatred towards refugees? The British commentator George Monbiot has summarized it in these words: “If you live in a country where people are left to die, this embeds the idea that you have no responsibility towards the poor and weak”. Also in the Czech Republic, celebrating selfishness and harsh capitalism at the expense of solidarity has won out. Morality based on empathy with those in need is considered a demonstration of personal weakness – it is here that the condescending term “sunshiner” comes from, a specifically Czech term initially used to label those favouring multiculturalism.  But a sunshiner is not just somebody who welcomes refugees, they are laughable already by virtue of showing compassion.

Racism for every day

The socially defeated Czech majority is made a fool of every day instead of having its problems solved. It is being convinced that the problem is the “overgrown social system” (which, considering the ratio of social expenditures and GDP, basically doesn’t exist in the Czech Republic). Political elites are riding a wave of xenophobia and want to win the elections with its help, in the spirit of the good old truth that scared people are most easily manipulated. And educated (“influential”) elites are feeding people with substitute problems and nonsense.

It is hard to believe that those who have the privilege to influence public opinion do not understand the link between asocial capitalism and possible fascization. Do they truly not understand that with the help of the values they preach, they are spreading callousness? Or do they do so on purpose? The reason is often banal – racism sells newspapers and the struggle with “hated political correctness” can easily make you more visible. A couple of years ago, the company Newton Media carried out an analysis of how foreigners are portrayed in the Czech Republic. And it found out that mainstream media write about foreigners mainly in relation to drugs, criminality, and violence. “There is little positive information (…). This supports the image of an unknown and dangerous foreigner”, the report states. The thousands of foreigners who normally live and work in the Czech Republic do not interest anyone.

Life around us has thus been condensed into a pack of banalities. The Greeks are “lazy” and “lived above their means”. Refugees and Muslims are “lesser people”. Humanists are “parasites”. Sunshiners are “traitors”. Everyone wants to “take advantage” of benefits. And it wouldn’t be like the Czechs not to make some profit out of all of this. Some time ago, a colleague from our editorial office brought up that a certain butcher near Prague has started selling a new delicacy. It’s a sausage called “Muslim”. The joke is that it allegedly does not contain pork. It sells well and to ask for “two terrorists” in that shop is nothing out of the ordinary. Today, racism and xenophobia are omnipresent and have firmly taken hold in our everyday culture. This society does not seem to be friendly by any chance. Or does it?

This article originally appeared on A2larm.cz. Translated by Veronika Pehe.