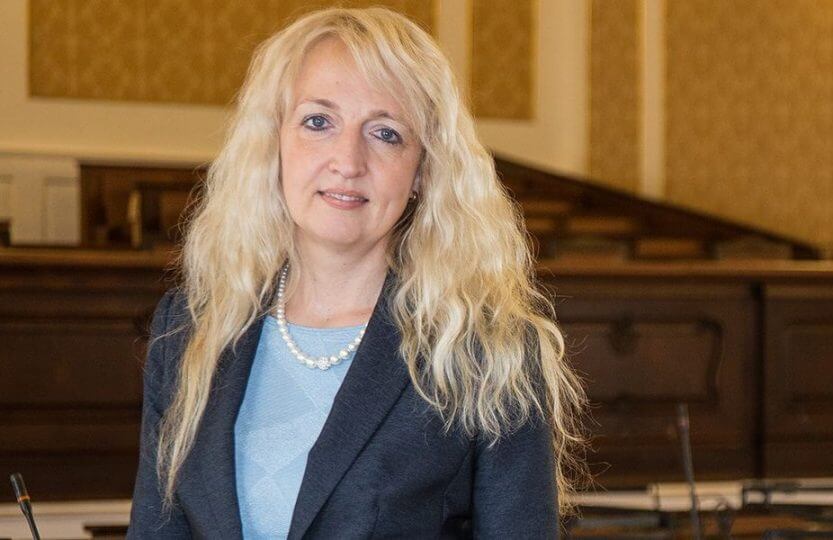 The Czech Republic is a strange land. It is one of the most atheist countries in the world, public opinion surveys show that Czechs have more or less liberal attitudes towards sex, gays and lesbians, as well as families. One would have to look hard for conservative organizations whose goal it is to dampen these liberal attitudes and support so-called traditional values. While in neighbouring countries, such as Poland and Slovakia, such organizations exist and are successful in activating a noticeable political potential, in the Czech Republic, such an agenda has found surprising allies. One of them is Pavlína Nytrová, member of parliament for the Social Democratic Party (ČSSD), which defines itself as left-wing.

The decline of the West

Nytrová spoke in Parliament against a bill on the adoption of children by gay and lesbian couples. According to this proposal, children would have the right to be adopted by their non-biological parent, with whom they live in a common household and who takes care of them. MP Nytrová is however of the opinion that such a legislative change would be a further step towards legalizing sex with children. This train of thought is amusingly illogical and refuting it makes about as much sense as saying that selling children’s undergarments leads to sexual abuse.

Nytrová has taken up a discourse that points to the decline of Western civilization, not by coincidence so popular in Russia.

With her raised finger, Nytrová has taken up a discourse that points to the decline of Western civilization, not by coincidence so popular in Russia. Its goal is to portray democracy of the Western kind as a society of perverts, who in order to satisfy their own need for pleasure are pulling apart the system, destroying traditional values, and attacking the privacy of families. Horror stories about juvenile justice are the domain of ultra-conservative associations often linked to the Catholic church for instance in Slovakia or Poland. These revel in heart-breaking stories of how this juvenile justice in the West steals children from respectable families so that it can deliver them for adoption to same-sex couples, mainly gays, who are less interested in becoming parents than they are in sexually exploiting the adopted children.

Associations such as Alliance for Families are able to mobilize extraordinary political capital. In Slovakia, this scaremongering even led to a referendum on the rights of gays and lesbians. The referendum may have been invalid because of low turnout, but the million voters who did cast their vote cannot be considered mere marginalia in a country with five million inhabitants. In the Czech Republic, such associations also exist, but they are not visible and their activities are either ignored by the public, or simply passed over with a smile. The myth of a powerful “homolobby” finally took root in the head of one Social Democrat.

The success of propaganda

I’m sure that Nytrová had basically good intentions, she’s just terrified of all those rumours about children robbed of their parents, abused children, or children sacrificed on the altar of some kind of pseudo-equality of sexual minorities. She probably saw some shocking videos in which teary-eyed children are drastically taken away from their loving parents and thought to herself that she doesn’t want to live in such a world and something should be done about this. That these videos don’t portray reality, but are made precisely to spread fear and mistrust in democratic institutions, is beyond her understanding. The MP is in the first place a living example that propaganda based on sexual harm to children is very successful. In an interview for Respekt magazine, Nytrová named a whole range of untrustworthy sources, which spread fear that can then easily be used to cultivate hatred and reap political capital.

What the MP propagates is an agenda of ultraconservative religious movements and not a left-wing party.

All these scary stories lack logic and evidence, but strike right at the core of our nervous system. The combination of children/sex or children/abuse works like a detonator. In this sense it is treacherous to speak of adoption by homosexual couples. As if gays and lesbians were first and foremost “sexuals”, while parental tandems composed of mums and dads don’t have anything to do with sex. Homophobic (and simultaneously anti-Western, anti-European, and anti-human rights) propaganda uses the archetype of the child snatcher. Earlier it was Gypsies or Jews, today it’s homosexuals who steal “our” children to use them for their disgusting schemes.

But from politicians, we would expect something else than impulsive activities based on nervous agitation. For example, it would be useful to be able to discern the opinion profile of different parties, which would reflect which causes their MPs support. The call of Labour and Social Affairs Minister Michaela Marksová for Pavlína Nytrová to leave the Social Democratic Party is thus entirely justified. What the MP propagates is an agenda of ultraconservative religious movements and not a left-wing party.

What is also unsettling is the innocence with which Nytrová believes emails from the organizations Ruskiye materi and internet discussions. What if Putin’s guards or Trump’s pioneers wrote to Czech MPs with the message that it is best to send gays and lesbians to prison or labour camps? The core of this affair concerns whether homosexual couples will be able to adopt children already in their care. But the wider picture reveals a struggle over whether we will allow ourselves to be convinced that our society is collapsing, heading towards death and ruin, and whether we will truly bury it with our own fears and renewed forms of oppression.

Lucie Jarkovská is a sociologist. She works at Masaryk University in Brno.

A version of this text was originally published on A2larm.cz. Translated by Veronika Pehe.