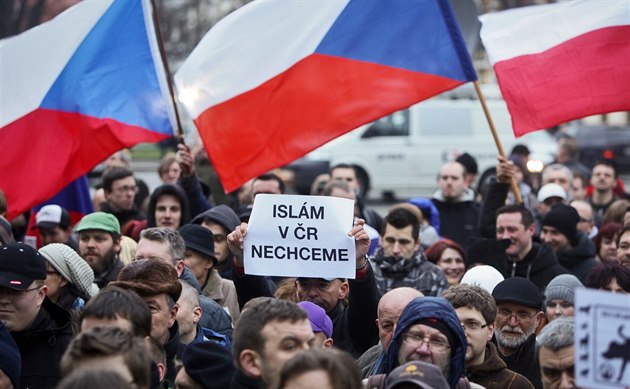 We tend to be happy with ourselves when our predictions about the future come true. It doesn’t cause us quite as much pleasure, however, when our predictions do come to pass, but they also mean that the situation is far from perfect. These prognoses are warnings which were not heeded, and we are left only with a spiteful “I told you so!”. In these situations, one would be happier to have misjudged the situation. The gradual fascization of the Czech political scene, including mainstream parties, is a topic that has been much discussed for years, in A2 and elsewhere. But I remember no journalist or political scientist who foresaw that the fascization of (not only) Czech society would be part of the response to an immigration crisis.

Who of us expected the extent of the rise of immigration, and developments in which the Arab Spring took steps towards social revolution, but then mostly dissolved in religious fundamentalism and civil war? If Czech xenophobia was written about, then mainly in the context of anti-Roma sentiments, which have definitely not disappeared, but have been overtaken by fears of millions of immigrants “flooding in”, and a world in which terror perpetrated by both nation states and fundamentalists balances out an asymmetrical planet. So on the one hand, our apocalyptic prophesies came true, but we were also wrong. Though something like this could have been expected after all.

The greatest fear is not of Islam, of which we know very little, but of the realization that if we are to confirm our humanity and sense of belonging with Europe today, then we chiefly have to change ourselves.

In the period of 2011-2013, which was marked by regular pogrom marches through excluded areas in a number of Bohemian and Moravian regions, a frustration with specifically Czech anti-Roma racism led many activists and NGO workers to the cynical conclusion that in particular the section of society that was getting poorer needed to find a new enemy. Nobody wanted to say it out loud, but it must have occurred to many. Today, we know that according to a large number of people, the new enemy is forcing his way into Europe’s doors, and inspires  horror caused by ignorance in both the poor and rich strata of society, both Left and Right. The authoritarian machine, meant to save us from everything foreign, sets its motors to full speed, and we almost can’t keep up with who else is unexpectedly putting a hand in for its maintenance. When we inwardly considered the need for a new enemy, we hoped that the bitterness and frustration would turn against systemic causes, but it appears that people will much more readily hate other people. It is a matter of course that one’s own identity is then strengthened by refusing others their identity.

We hear from all sides that Europe is not ready for the changes which are already happening on a global level, but it is all the more true in the case of the Czech Republic. Few countries are as unprepared as a state in which there is still no functioning inclusive education system, social services don’t help integration much and, particularly among the older generations, few speak a language other than Czech. Generous integration programs existed and continue to do so, but they are almost exclusively aimed at Czechs returning from abroad, or selectively chosen political asylum seekers, of which, anyhow, there are lamentably few. Experiences with refugees from war-torn countries and perhaps a markedly different culture are missing completely. We cannot be surprised, then, that migrants see us as a transit country – they mostly tend towards French and English, and they soon learn that Czechs look upon anyone who does not speak their language with animosity. The greatest fear is not of Islam, of which we know very little, but of the realization that if we are to confirm our humanity and sense of belonging with Europe today, then we chiefly have to change ourselves. This is what nobody wants to do, and instead, we are preparing to protect our right to stay the same with a militaristic thoroughness.

Dismay at the shift of a significant portion of society towards an empty, but clearly still functional nationalist rhetoric is therefore somewhat misplaced. It would be startling if a society as perfectly ethnically homogeneous as ours, which expelled even the Slovaks with zest and conserved this state in the so-called free period of the last twenty-five years, were to turn out any other way. The fact that there are things to warn about and to resist simply does not mean that there is anything to be surprised by.

An analysis of the causes and effects should, however, have its limits. We can certainly express why Czech society is among the least open and is sufficiently determined to an almost paranoid distrust of anything unknown, but we can hardly use it for its justification. There has recently been an obvious attempt, by various public intellectuals, to meet ideological opponents halfway, to stand with the people, to understand why they listen to the lyrics of the agro-Nazi band Ortel, which came second in the popular vote of the largest popular music awards in the Czech Republic in 2015. This can easily descend to self-castigation that is ultimately perceived as ridiculous by all parties. All the necessary comprehension of both the economic and historical causes of Czech xenophobia, and the uncovering of elitist arrogance, should not lead to the conclusion that in the end, the fascization of others is my fault. Self-examination cannot be done in absentio, and it is hard to force it on those who don’t want it. In this desperate situation, one wishes that another new, and this time truly more productive enemy could be found, but recent events show that this has led to nothing. The solution lies in change, which definitely won’t come from the outside. We could have done a lot of work on it already, but instead, the times caught us out entirely unprepared.

This text originally appeared in A2 1/2016. Translated by Ian Mikyska.

Lukáš Rychetský
is the deputy editor-in-chief of the bi-weekly cultural magazine A2.
> see other articles <