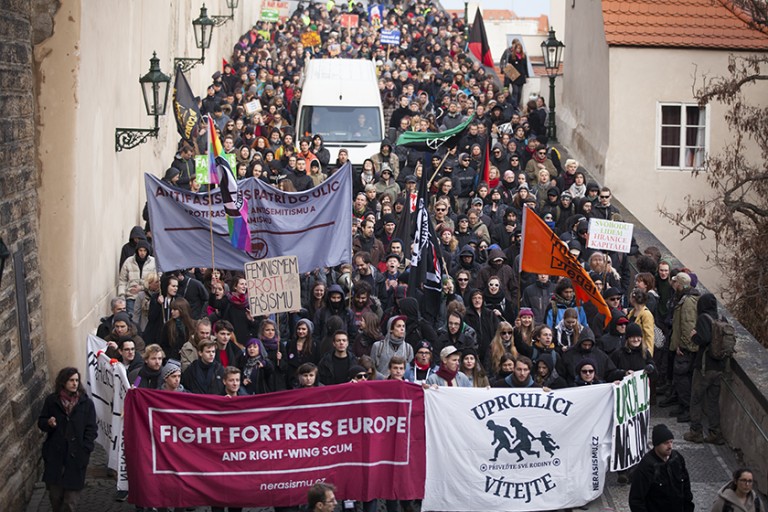 Pegida, neo-Nazis, Christian fundamentalists, people dressed as medieval knights, famous Japanese Czechs, motorcyclists and fans of Slavia Praha – they all gathered on Saturday, 6 February in the Hradčany district of Prague to protest against the influx of refugees and the policies of the Czech government and European Union. Two anti-racist demonstrations gathered in opposition.

Czechs are hedonistic pragmatists. Their culture is focused on inflicting pleasure in reasonable quantities. Grass is legal, beer is cheap, cuisine is fatty and high in calories.  The list of legal drugs is a conservative’s nightmare. You can legally carry 10 grams of marijuana, 1.5 grams of methamphetamine, 1.5 grams of heroin, 1 gram of cocaine, 5 grams of hashish, or four tablets of ecstasy. More than half of Czechs aged 15-34 have smoked pot. 65% of the population are atheists. Budapest and Prague are the capitals of the European porn industry. “Sometimes I think that this is a diabolical policy of all governments in the Czech Republic”, laughs Jan Bělíček, editor of the biweekly A2, a left-wing cultural magazine based in Prague. “You know, all these basic needs are satisfied: people have the sýr, the beer, the pot and are kind of relaxed.  There is no potential for an outbreak of social tension in these conditions”.

Until recently, it seemed that the Czech Republic did not have much of a problem with the extreme right. In this way, it stands out in a region where nationalists have entered mainstream politics in other countries. The far right was limited in the Czech Republic to what it was in Poland in the late nineties, a small group of neo-Nazi and nationalists. The second party in the polls are the Socialists, the Communists rank third. The Communist Party of Bohemia and Moravia (KSČM) is currently the largest party in the country with 107 000 members. In comparison, the ruling Polish Law and Justice party (PiS) has approximately 30 000 members and the major opposition party, Civic Platform (PO), only 17000. It is however mainly the elderly who vote KSČM and most of its members are about sixty. They have problems attracting younger voters. Their positions are often soaked with post-Soviet resentment and anti-revisionism. When I ask participants of the leftist pro-refugee demonstration about the KSČM, they summarize briefly: hopeless.

Meanwhile, on the extreme right, intense movements are happening. They all want to gain popularity amongst new xenophobic voters and gain the support of slušní Češi (“decent Czechs”) – as opponents of the refugees and multicultural society like to call themselves. One of the candidates for the leader of the extreme right is Tomio Okamura, a businessman from the tourist industry. The son of a Moravian mother and Japanese father, his biography also includes a spell in a foster home and selling food at a cinema in Tokyo. He built a career by cooperating with Japanese travel agencies in Prague, appeared on television programmes, in particular about holidays, and wrote columns for newspapers. He is also author of a book, Tomio Okamura. Czech Dream, which made it into the top ten sales in the Czech Republic. For ten years, he has edited the Beer Quarterly. Quite popular was also the reality show D-Day, in which Okamura chose a person to whom he gave money to start their own business. He started his political career in 2012, becoming a senator for the district of Zlín. His programme is to fight against corruption, nepotism, and cleptocracy and supports ethnic segregation. Although of Japanese origin, Okamura has strong anti-immigrant views, and has even suggested the expulsion of the Roma to India. In 2012, he tried to take part in the presidential election, but the electoral office questioned some of the signatures supporting his candidacy. To a large extent, he is the Czech Janusz Korwin-Mikke, the infamous xenophobic and libertarian populist Polish member of the European Parliament. In 2013, Okamura’s Dawn of Direct Democracy party received 6.9% of the votes and won 14 parliamentary seats. But a dispute soon followed and Dawn MPs expelled Okamura from the club. He then founded a new organization, Freedom and Direct Democracy (Svoboda a přímá demokracie, SPD) and this party organized a picket against refugees at Loreto Square.

Jan Veleba, a senator for the Party of Citizens’ Rights – “Zemanists” also appeared at the demonstration. There is a saying in the Czech Republic, přihřát si polívčičku, Pavel Šplíchal from the political magazine A2larm tells me. “It literally means “to heat up the soup” (by somebody’s else fire). This is when someone is trying to get some gain out of connecting to a popular cause. That is what Zeman is doing now”. Konrad Góra, poet, until recently living in Prague, describes the President of the Czech Republic to me  as a combination of cynical Polish post-communist Leszek Miller and popular peasant tribune Andrzej Lepper. Cynicism and folk origins, a good sense of how the street thinks and being slušným Čechem are his constitutive features. He likes to think of himself as the voice of the Czech province. He won the presidential election against the conservative liberal Prince Karel VII Schwarzenberg. Zeman openly states, that the influx of refugees is a planned invasion, organized by the Islamic Brotherhood. When he gets awkward questions, he often responds – you must be from Prague, only someone from the capital could ask such a question. And the Czech province is not Prague. It is more conservative, averse to foreigners, the same as in all of post-communist Central Europe. When Veleba speaks, the crowd cries Down with Merkel! Čechy Čechům! (Czech Republic for the Czechs!) You can clearly hear the harsh Austrian accent when Wolfgang Jung from the far-right Austrian Freedom Party (FPÖ) speaks in German. He wants to defend European culture against the flood of immigrants and Islamists. A few hundred people listen. The rally is happening behind a fence and tourists pass it easily. At the corner, people buy hot dogs and sausages. As in the case of the German Pegida, people here are mostly in their forties.

The second, larger anti-Islamist demonstration was held on Hradčany, at the Castle. I was organized by Block Against Islam (Bloku proti Islámu, BPI) and the party of secessionists from Okamura, Dawn – National Coalition. Three thousand people gathered between the statue of Masaryk and the Castle. Again, you could hear whistling at the mention of Merkel, again some speakers used the word “parasites” when referring to immigrants. After a speech of a veteran from Afghanistan, a deputy from Dawn, Jana Hníková, a nurse, talks about the threat of an epidemic that, in her opinion, refugees will bring. Leader of BPI, entomologist Martin Konvička, himself the son of a refugee from Greece, thunders against the Islamisation of Europe. A representative of Pegida greets the leader of the movement Lutz Bachmann, who is speaking in Bratislava. The main ideologist of Czech anti-Islamism, Petr Hampl talks about the battle of of Mohacz, which was lost to the Turks, and the death of the last of the Czech Jagiellonians. You have to admit, though, that economic appeals are far more present here than in Polish anti-Islamist demonstrations. In Poland, mostly issues of identity, or references to religion are used. Here you can hear about cheap labour and the refugee crisis as an intentional act in favour of business.

The usually quiet Prague demonstrations took a more radical course this year. A counter-demonstration of anarchists and students was attacked with stones when several masked men tried to break through the police cordon and get to the marchers in the Malá Strana quarter. Czech Antifa responded to the attacks and the police tried to separate the fighting people. Jakub Ort, a student of Protestant theology, hold the megaphone at the pro-refugee demonstration. “Brick by brick, wall by wall, this is how Fortress Europe will fall”, he shouts into the megaphone. “We oppose the EU border policy and the activities of Frontex. They are responsible for the death of refugees on the shores of Lesbos”, he tells me while marching through Malá strana towards the government buildings. Protestors are cut off from them by several consecutive police blocks. Anarchists greet the other left-wing groups and about a thousand people rally together. Visible are Trotskyists of the Czech section of the SWP and a large number of Greens. It also comes to minor scuffles. When the left-wingers gather at the monument of the Czech Resistance, some of the nationalists break through the cordon and with a cry of “Švejci” (meaning basically “cowards”) start to fight with the anarchists. After a few minutes, the police separates both groups. Cursing, shouting and small fights were common throughout Prague on this day, while police patrols with dogs, officers on horseback, and intervention squads passed through the city.

In the evening violence escalated. The Autonomous Social Centre Klinika, located in the district of Žižkov, was violently attacked. Normally, a cafeteria operates here, and the centre offers courses in Czech, Romani and English, a freeshop and bicycle repair garage. More than ten people live here. On Saturday after dark, about twenty masked attackers broke windows in the building and threw a dozen of Molotov cocktails into the centre. People inside were also pelted with stones. One person was taken to hospital. The attack has been condemned by the district mayor Vladislava Hujová (from liberal conservative party of prince Karel Schwarzenberg, TOP 09), the mayor of Prague Adriana Krnáčová (from the liberal ANO, party of Andrej Babiš, the second richest Czech) and the Social Democratic Prime Minister Bohuslav Sobotka. “There is no place for violence in a democracy. I condemn the arson attack on the Social Centre Klinika and I am confident that the police will quickly track down the attackers”, Sobotka wrote on Twitter. After arriving on the spot, the Minister for Human Rights and Equal Opportunities, former candidate of the Social Democrats (ČSSD) for president Jiři Dienstbier Jr. said: “It has exceeded all limits. No one can remain indifferent. Hatred is spreading among Czechs. We have to stop it”. Krnáčová commented: “Prague is an open, international city that will not tolerate manifestations of racial, religious and ethnic intolerance”. The fire brigade was in place in four minutes. This saved the building.

The Czech extreme right, for years pushed to the margins of political life, wants to take advantage of the refugee fever. Leaders of small parties are trying to outbid each other in their radicalism and racist comments to win the greatest support of slušní Češi. For now, they are shattered and conflicted, and this is what largely hinders the emergence of a racist party representation. However, it is known that members of the BPI will be on the electoral lists of Dawn. The process of the unification of Czech extreme right is progressing. With KSČM and ČSSD being accused of anti-patriotic policy, we may soon find that a force similar to the Hungarian Jobbik or Polish Kukiz’15 will emerge on the Czech political scene. For now, the casting continues.