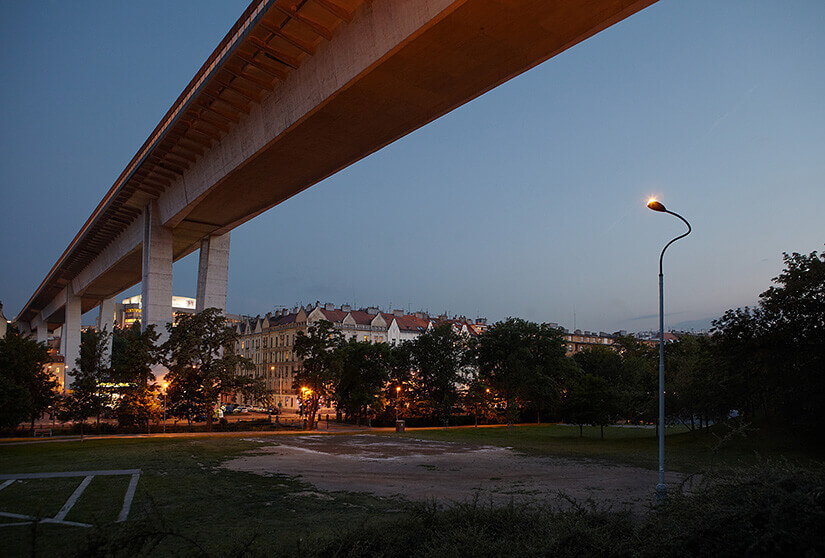 Supporters of the law that would allocate 1-4% of the public works budget for the arts are convinced that the quality of contemporary art in the public space has a positive impact on the social, economic, and mental development of a place. The Czech ministry of culture is currently discussing the law. Initiated by the Skutek association that facilitates the interests of Czech artists, members of parliament and the ministry of culture are debating the possibility of reinstating the, so-called, ‘arts tax’. The association’s primary political partners are the deputy, Martina Berdychová, and the Green party leader, Matěj Stropnický. As a result of this long-term initiative the ministry of culture supports the proposal and the head of the arts department, Milan Němeček, said, at the beginning of this year, that passing the law is one of the priorities of the ministry’s legislative plan and also one of the state’s commitments in cultural politics for the 2015 to 2020 period. But we are far from successfully resolving this issue.

After 1991, with the end of state support for the fine arts in public spaces, official commissions were significantly reduced. The withdrawal of state support, deregulation of urbanism and privatization of public space reflected the neoliberal ideology.

Art installations in public spaces have been a part of cultural tradition dating back to ancient civilizations. They have always been an important part of the life of residents, reflecting their aesthetic, urban, political, social and representational needs and sentiments. The Czech capital’s historical heritage, for example, is regarded as a significant example of connecting urban public space and fine arts worldwide. Its staged urban landscape is on the list of the UNESCO world heritage sites. But there have never been as many arts competitions and social commissions in Prague history as in the period from the 1960s through to the 1980s. A huge number of commissions was made possible by subpart 5 of the act concerning the, so-called, four percent tax on the arts. This mandated that every state building donated one to four percent of their overall budget to an implementation of arts as part of the building. After the church, the feudal, and the national bourgeoisie gave up their traditional role as sponsors, most western European states and North American cities adopted the same principle. Within this framework, about 2,500 arts projects were undertaken in Prague between 1965 and 1991. The vast majority of them are from some of the–best-known artists of the second half of the 20th century. After 1991, with the end of state support for the fine arts in public spaces, official commissions were significantly reduced. The withdrawal of state support, deregulation of urbanism and privatization of public space reflected the neoliberal ideology; while the West went on to continue the tried-and-tested method of percentages for the arts, even after the end of the cold war. Between 1991 and 2015 only 59 official art works were installed in the Czech capital, most of them works of rather poor quality. The contemporary works of good quality include the sculptures of Kurt Gebauer in Prokop valley or Memento mori by Krištof Kintera under the Nusle bridge, which, it must be said, were pushed through and paid for by the artists themselves. There are almost no examples of good quality contemporary arts in Prague from the period after the Velvet revolution. Without qualified committees and public competitions, officials and politicians without the necessary education make decisions to select works that fit into the conservative sentiments of uninformed political representation. During this same time, however, the visual arts have come a long way since the end of modernism.

We believe that the solution to this unfortunate situation lies in passing legislation that mandates a necessity to spend one to four percent of the overall budget of a public project on its artistic or spatial composition. The law does not concern merely material support for the arts. The main issue is the quality of the work. For that reason, a regulation, ordinance, law, depending on whether it concerns the city or state level, includes its inseparable executive instructions. In the first instance there is a requirement for transparent tenders, decided by a committee composed of a representative of the state’s urban administration, the work’s architect, and the future user of the work and by experts on theory and practice in fine arts and architecture. To define the social role of fine arts in the public space is very difficult, just as it is impossible to describe the role of the arts in society in general terms. This role changes depending on the approach of specific authors as well as the commissioning entity, usually politicians. It means that this is also dependent in the political situation. We can say, of every period, that official art, in public spaces, reflects, similarly to architecture, the political and societal situation. According to Ludvík Hlaváček, the arts and culture theorist, all art is political in the sense that it opens up a window into social relations. But this doesn’t mean that democracies should give in to political orders from the top. It means, rather, that we should strive for the strongest impact of the interested public, both lay and expert. It is necessary to involve an expert public in the processes of making art part of the public space and give preference to those who will have an impact and involve the wider public. But we should not by any means, populistically, give in to mainstream taste, or the lay public. This inappropriate approach was encouraged by the socialist realism of 1950s, when the arts followed political directives and the alleged needs of the broadest public. The new leading administration after 1989 set off on the same course – in the absence of tenders, works that focused on simplified understanding were being chosen, seeking examples much in the same way that social realism did in the historicism of the 19th century. Contemporary works in the public space should rather be truly contemporary and demanding so as to educate residents. Speculative populistic attractions can be left to commercial projects. In short, the present way of situating the art, the role of the public space and planned approach, instead of involving users, must be reconsidered within the complex structure of present day society and changing urban space.

The percentage for the arts system offers one of the most important, and proven, tools for a targeted cultivation of the public space.

In we striving for a political way of recreating the percentage system for the arts, we first need to talk about the function of the arts within the public space and emphasize the reasons for which the city, or the state, should support the creation of contemporary fine arts in the public space. For example, we can highlight its social functions – the ability to change urban residents’ perspective, opening and focusing it, and thus also helping to solve certain contemporary problems and offer an alternative to mainstream opinion. We cannot neglect its function in the prevention of crime and pathological social behaviour. There have been a number of sociological studies that address our, generally shared, experience that the cultural level of public space is a crucial tool in the elimination of negative expression, connected to aggression among people and concerning respect for possessions. It is an educational tool that works with positive motivation. It helps to introduce new behavioural frameworks for its users leading to lowering the expenses connected to preservation and maintenance.  To put it differently, few people spit on church ground. A well thought-out architectural and artistic interpretation enables users to identify themselves with the place and eases spatial orientation. Last but not least it is necessary to remember that investing in quality art brings fast returns and generates long-term revenues. The ability of the arts to lend attractiveness to urban localities, attract people and, thus, support trade is well known and widely utilized in surrounding European states. Tourists from all over the world visit Prague to explore its sites. Contemporary art works would surely attract these tourists too. The revitalization of the periphery, racially and socially segregated spaces, or, thus far, under-used partners, has a decisive, positive economic and social impact. This, however, does not exhaust all aspects of the impact of the arts in the public space since it is difficult to encompass the major ones. But we can describe them in the sense that art plays a crucial role in creating ‘genius loci’. It is this genius loci that is the reason some spaces offer inspiration and people like spending time there while other places are lacking. The percentage for the arts system offers one of the most important, and proven, tools for a targeted cultivation of the public space.

Pavel Karous
The author is a sculptor and member of the Skutek association.
> see other articles <