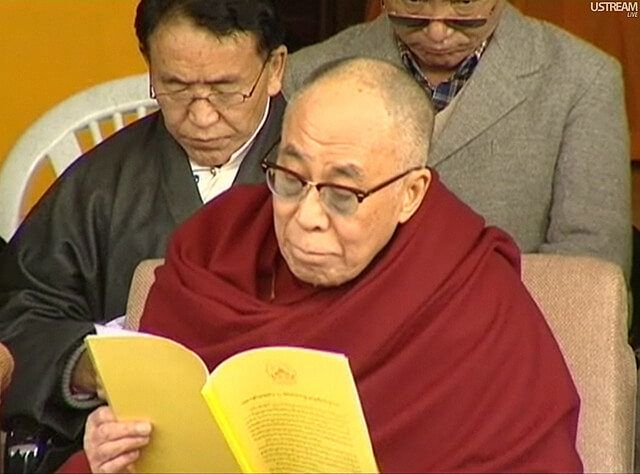 It is a safe assumption that when the Dalai Lama agreed to speaking at the Forum 2000 conference in Prague, he did not anticipate becoming a political battlefield. Yet this is exactly what happened; with just about every party, faction and government minister being thrown into a state of panic over the suddenly acquired need to have (and vocally share) an opinion on His Holiness, the Czech political scene is in a state of disarray. Why does one tiny old man with little or no political power here cause such an uproar?

A case of presidential pettiness

The Dalai Lama arrived on Monday and the first controversies arose immediately. He was supposed to publicly appear – along with several other speakers and musicians – at Hradčany square, the place where visiting statesmen usually address the citizenry. But alas, it was not meant to be: by decree of the Prague Castle Administration, issued at a rather conspicuously late date of last Thursday, it was forbidden to build a podium there. Reason not provided, better move the entire event in three days, good luck with that.

This rather petty act has not gone unnoticed and several Ministers announced their desire to meet the Dalai Lama personally, which, in turn, angered the Presidential Office, always happy to publically assure China of Czech Republic’s unyielding yet rather endemic support. Miloš Zeman, who already refused to meet the spiritual leader, published a statement of apology and distancing himself that was also signed by the Prime Minister and heads of both chambers of the Parliament.

Who was it addressed to? China.

Logic dictates there should be a reason behind such an act but going purely by the country’s interests (a phrase often echoing in political debate surrounding the whole mess) it is rather difficult to find one. While it is true that China loudly discourages any country from hosting the Dalai Lama and threatens (typically unspecified) sanctions whenever he appears in public, it is also true that China has been doing this since at least the nineteen eighties with negligible results. The groveling attitude as showed by Zeman is in especially stark contrast to that of neighboring Slovakia, which hosted the Dalai Lama last week and where the President Andrej Kiska stated that he was honored to meet the exiled spiritual leader.

Definitely our most important trading partner, we swear

The official attitude shows a rather distressing tendency of turning Czech foreign politics towards China. Setting aside the human rights issues for now, the most common argument of the pro-China faction of which Zeman is the most public representative is based on economy. China is the largest market on Earth, we need their investments, we need them as a trading partner. Do we, though?

Earlier this year a wave of protests from steel mills shook the country. The whole industry was threatened by the influx of cheap steel products imported from – you guessed it – China. Before the situation was somewhat alleviated by raising the import tax, the profits of Czech steel mills dropped by a third and the industry teetered on the edge of collapse.

How about the actual investments? Contrary to what the President would like us to believe, they are rather negligible.

In 2015 they totaled at about six billion crowns – out of the foreign investments in Czech Republic, this makes about 0,2 per cent. Yes, China definitely considers us an important trading partner and we absolutely cannot afford to upset it.

Shockingly, it would appear that having a mutually respectful diplomatic relationship with China is not as much of an economic lifeline as the preemptively apologetic Presidential Office would have us believe. Yet someone is spending a lot of time and money to convince the Czechs otherwise. During the Chinese President’s visit in March, Prague was covered in (Chinese-texted) billboards, lampposts were decorated with (Chinese) flags, and someone even arranged for a (Chinese expat) cheering crowd complete with little flags, big banners and medium-sized buses to ferry the mob around Prague in order to deploy it wherever The Great Xi Jinping might happen to glance out of a window.

Why go through all of this? Why go out of the way to condemn the Dalai Lama and even try to sabotage his visit, especially in such a childish way?

One possible explanation is that while the actual benefits of a partnership with China to Czech Republic are somewhat dubious, the benefits of said partnership to certain people are rather more tangible.

In 2015, the President Zeman announced that he accepted a new economic advisor. His name? Ye Jianming, the chairman (a rather dubious claim given the notorious opaqueness of the company) of China Energy Company Limited, or CEFC, a company represented in Czech Republic by Jaroslav Tvrdík, another acquaintance of Zeman’s who was instrumental in arranging the President’s original visit to China. All in all, the assumption that there is a potent pro-Chinese lobby affecting or outright dictating the Czech foreign policy really does not seem that much of a stretch.

Zeman versus the cult of Havel

Economics aside, the fight over whether or not to welcome the Dalai Lama has another level in Czech Republic. The man is a symbol not only of religious ideals but also of the fight against totalitarianism – much like his friend, the late former Czech President, Václav Havel. In addition to being internationally recognized, Havel has become sort of an icon to certain parts of Czech society, mostly the intellectuals and right-wing upper middle class; people united, among other things, by standing in direct opposition to Zeman. By fighting the Dalai Lama, the President is fighting the cult of Havel and the politics it stands for, on the international level mostly concerning an orientation towards the West.

The statement behind the statement of apology to China is clear: it is the President, not the government, who dictates foreign relations of the country. No matter what the actual government policies are, Zeman goes on pushing his own agenda, generally making statements in favor of China and Russia. And he welcomes any controversy caused by the circumstances of Dalai Lama’s visit as it gives him the opportunity to reinforce his position: here I am, no matter what our history and political identity was before; now we play by my rules.

A rather unflattering mirror

So far, the battle of Dalai Lama has escalated several times.

The apology was followed by dismissals from several opposition politicians and most universities which promptly put up Tibetan flags, an action that got the Prague university harassed by policemen during the Chinese President’s visit in March. In response, Zeman’s spokesperson and court jester Jiří Ovčáček stated that the Minister of Culture, who initiated the meeting, is working against the country’s best interests and should resign. And then Andrej Babiš, the Minister for Finance, millionaire, one of the most powerful people in the country and utterly coincidentally Deputy Prime Minister, expresses admiration the politicians who met the Dalai Lama, presumably smelling some cheap popularity to be made while implying the actual Prime Minister, whose only contribution was quietly supporting the official statement, is a weakling.

The resulting mess is rather typical of Czech politics. It touches on the big issues of human rights, Czech identity in international politics, economic factors and even the basis of parliamentary democracy (being fundamentally unable to handle a loose cannon President), but what ultimately matters to actors in this little absurd drama is their own property, their own popularities. And thus a Nobel Prize winner and a widely respected spiritual leader is reduced to a point of contention between bickering kids.

Whatever we think about the Dalai Lama’s political and religious views, he has certainly proved amazing at one thing: being a mirror. During the three days of his visit, the Czech political scene has managed to demonstrate just about every bit of enmity, rivalry, treachery, pettiness, groveling, indecision, dishonesty and spinelessness present within our current political class. Not bad for a little old man.