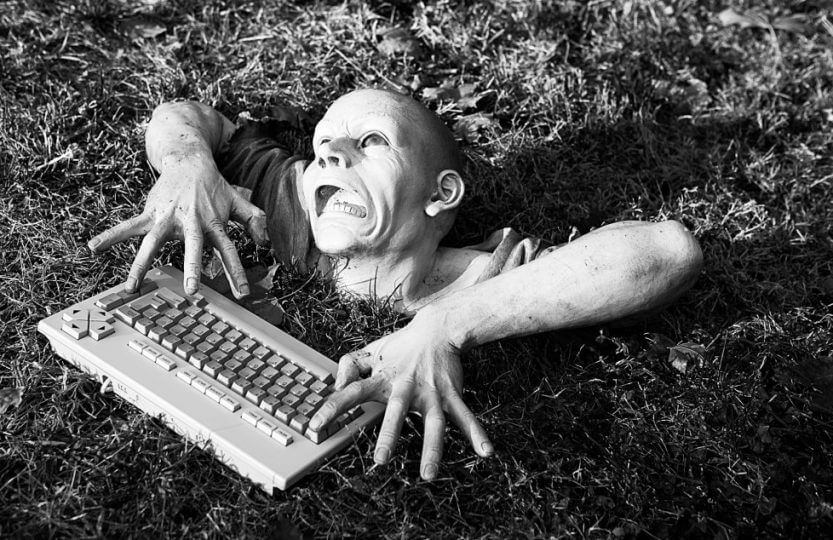 Who is to blame when you cannot handle the stress at work? The answer is obvious – you yourself; after all, only a slacker and a wimp would ask that question in the first place! We encounter these type of pearls of wisdom every day, but try telling that to the Chinese laborers of Foxconn who commit suicide due to being overworked; or the dozens of employees of French Telecom driven to killing themselves by their superiors’ bullying; or the Deutsche Bank stockbroker who one day in 2009 simply decided to dress in his best clothes, take a glass of champagne and jump from the roof of his favorite French restaurant. If nothing else, he left the mortal coil with style.

Although the high-class methods of suicide preferred by the managers differ rather drastically from the options available to a Chinese slave, all the above-mentioned people have one thing in common; every single one of them chose death over the miserable lives lived by the rest of us, doomed to slowly wither and die on our feet at the workplace.

The system we live in is full of pointless toils that wreck our health and destroy our lives – but what can we possibly do about it?

A world of working zombies

In the film Deconstructing Harry, Woody Allen asks a prostitute he just slept with if she enjoys her job. “It’s OK,” she answers, “beats the hell out of waitressing”. The problem is that prostitution is no cakewalk: no job security, limited professional growth, no career prospects, no pension and the actual work is… Let us say not for everyone. Being a prostitute is not exactly a dream job – and yet, many people feel like it is precisely the job that they are doing. According to the British Professor Peter Fleming, feeling like a prostitute is most common among managers and consultants – but it is not just them. Whether you work in a call center, supermarket or in an office somewhere, the results are similar: very little free time, constant stress and burnout.

“I feel exhausted, empty… dead,” was a common answer Fleming received when interviewing employees. “When you go to the client, you’re fine – but when you come back, you feel horrible,” confessed an IT consultant.To put it bluntly: you feel like a worthless piece of shit. But how come?

It may be that the job does not make sense to you anymore, but that is not all. According to Fleming, automatization and technical developments have led to a fundamental change in the nature of work itself: computers and robots can be on-line around the clock but a human being cannot. In spite of that, we are constantly forced to be available at any time. The fine line between work and leisure time is fading, work has started to devour our lives.

Working drains us – sadistic bosses pressure us to finish the task at all costs while the little Eichmanns of today keep thinking up new ways to lower companies’ expenditures and save money on the employees.

Our lives have become a tool for the rich to make money with. We dream about work, impoverished academics work over the weekends with no pay, miners live in perpetual fear of their mine being closed while smartass journalists just shout at them to requalify in order to sell lemonade. This is our world – the world of the living dead, waiting for the end which is not coming.

In Praise of Idleness

It needed not to have come this far. As late as the sixties, people believed that technological development and the automatization of work would lead to shortening the working hours and providing sufficient leisure time for everyone. Instead, all that came was even more work. In some places they at least try to make it more bearable, like Sweden and its experiments with the six-hour working day – but definitely not in the Czech Republic, which prefers to experiment with six-days-a-week work. We – rather foolishly – believe that there isn’t such a thing as a free lunch or, even worse, we think that “he who does not work shall not eat.”

To many people today, the idea of working a maximum of four hours a day and still having sufficient means for a decent existence is nothing short of preposterous. But a similar idea was once put forward by the renowned British mathematician Bertrand Russel in his famous essay In Praise of Idleness. Just what was that absent-minded English academic trying to say? Maybe that the way we think about work is completely outlandish. History is full of examples of people who work hard for their entire lives, but hardly manage to feed themselves and their families. The surplus they produce was always commandeered by the ruling classes. Moreover it is these rulers exploiting the system who keep pulling the wool over our eyes with their talk of the ethics of “hard” or “honest” work. All they do is put the moral gloss on an unjust system from which they benefit.

For starters it would be enough to just perceive work with regards to what constitutes a fulfilling human life. Doing that, it is difficult to argue against the conclusion that we should work less. Just take a look at the factory hall of Czechia: the employers and international companies are positively in raptures about people that are constantly on the lookout for the traitor who does not work enough, while being obsessively fond of stepping on each other’s toes. Czechs are currently the fifth hardest-working nation in the EU, near the top when it comes to the amount of time spent at workplace – even though our wages do not reflect this fact. Now even the suicides are often work-related– usually linked to job loss, debts and despair over our social situation.

What does a cashier in a supermarket, doomed to slaving away for fourteen thousand crowns gross, get out of life? She is under constant pressure, she works overtime without pay and usually she has to find another job on top of that. She has no time for leisure or family – and in exchange she gets health problems she cannot afford to address because she would lose her job: “I could not get by if I were at home sick. Who can afford that nowadays? It’s only for when I am seriously ill… Once I ended in a hospital, but they stuffed me full of antibiotics and that was that,” confessed the fifty year old cashier in a recent survey that revealed truly scandalous workplace conditions.

We are still fighting the legacy of two right-wing governments, Topolánek’s and Nečas’, which froze the minimal salary growth, essentially just so we didn’t get any funny ideas. This criminal regime ruled for several years with disastrous consequences: in order to keep our financial security, we got used to working more than ever before and with that, the idea of paid work as the way to a decent life disappeared without a trace.

Now work brings ruin upon our bodies and souls – as well as humiliation in front of superiors who claim that exhaustion is a mark of weakness.

We still have not found a way out of this mess. We are being robbed of self-realization and the joy of living. Someone suffering from increasing work pressure becomes frustrated to the point of sadism, easily politically abused as well as being made to direct this anger at false targets. The wages rise slowly, in sharp contrast to the rapid march of automatization, which will in time render plenty of people job-less. Although many have dedicated their entire lives to work, the moment when they simply do not have it anymore may come soon. So far, we are talking solutions like forcing minimum wages or shortening the working hours – but will that be enough? Won’t the collapse of hundreds of thousands of jobs lead to a new – revolutionary – situation which will require more from every single one of us?

Working slowly kills both our lives and relationships. Part of us is overworked and feels horrible; another part is unemployed and feels equally bad. This benefits no one, it leads to dehumanization and resignation to the loss of dignity and freedom. Either we make the human being and its needs our top priority and find a solution, or we will keep listening to those who built this inhuman system. Even technology could be utilized to provide peace and harmony instead of today’s overflow of work and fear of the future. As Bertrand Russell wrote: “Hitherto we have continued to be as energetic as we were before there were machines; in this we have been foolish, but there is no reason to go on being foolish forever.”

This text originally appeared on A2larm. Translated by Michal Chmela.