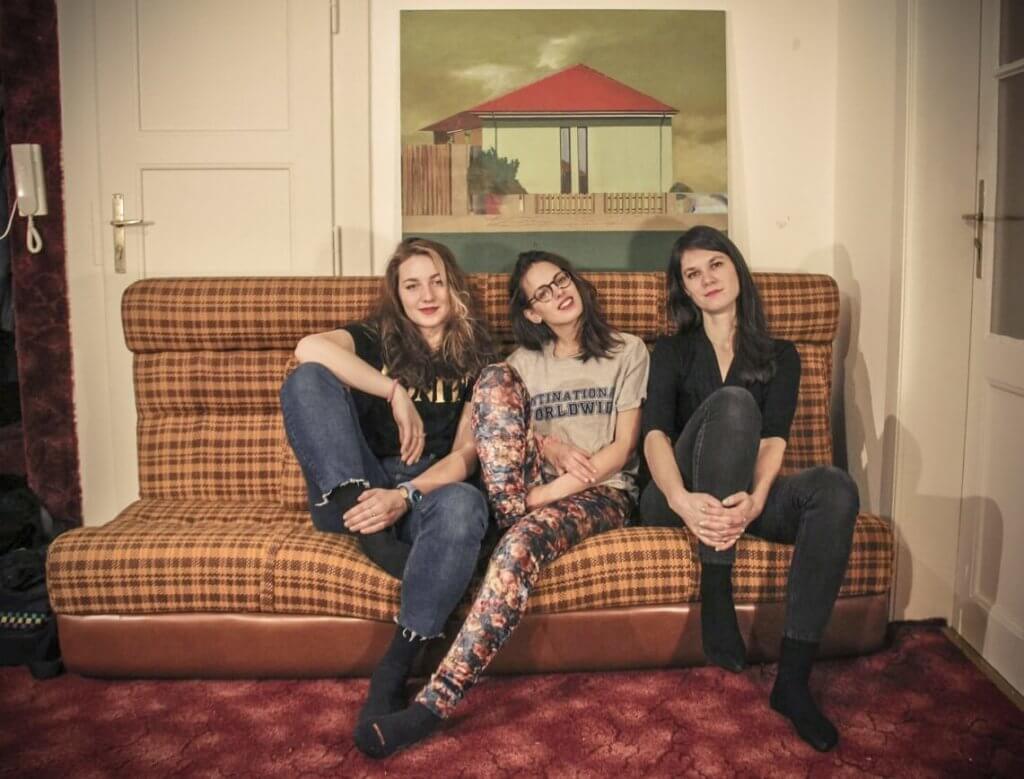 In the sphere of art and political science, we regularly encountered sexism at all levels of the educational process. These fields of study are, of course, embedded in the historical context that traditionally excludes women from public production. At the same time, we are – and have been since the beginning – fully aware of our experiences not being unique, but woven into a complex pattern of specific problems with which women have to deal. We are attempting to solve this issue. The omnipresent disadvantaging of women, be it in education or beyond, prompted us to form a feminist group. Hence the commencement of the Fourth Wave, an independent feminist project started by three friends. We decided to use Facebook as the medium for our activities. Our main goals are to subvert the gender stereotypes ingrained in our society, and to expand public awareness of feminist topics by creating and sharing short videos.

The footage itself consists of several short stories related to female students receiving sexist remarks from their teachers, including teachers evaluating students based on their gender.

The first viral video that brought us into the public eye describes just how present is sexism in several Czech art universities. The footage itself consists of several short stories related to female students receiving sexist remarks from their teachers, including teachers evaluating students based on their gender. More than 140,000 Facebook users viewed the video, with many other females sharing their own stories as a result. Therefore, although it originally focused only on art schools, it quickly became apparent that these were the same issues troubling students who are studying in technical fields, the humanities, and science programs.

After the video went public, we often faced criticism for exaggerating the issue and creating pseudo-problems because the displayed behaviour, appalling as it was, only showed a few “black sheep” who needed to be called out and sentenced. What these responses showed us, however, was the unwillingness to consider this problem as a structural issue based on the rigid hierarchy of power and deep-rooted sexist thinking. We offered our viewers the stories of art school students because two members of the Fourth Wave group are artists, but we are all too aware of the fact this structural problem is in no way endemic only to the sphere of art: sexism and gender discrimination are present at every level of education and permeates throughout our entire society.

The confrontation with a sexist environment and paternalistic hierarchy in the highest echelons of education is are just a consequence of the unfairly constructed rules upon which our society operates.

Currently, there are more women than men studying at Czech universities. Education would then appear to be the simplest means of emancipation because it brings a perspective for transcending the social hierarchy as an individual. But in reality, gender inequality accompanies us throughout the entire process of education up to adulthood. Research indicates that the self-image of girls takes a negative turn upon entering school: even six-year old girls start to doubt their own intelligence despite never having displayed such attitudes when they were five. The confrontation with a sexist environment and paternalistic hierarchy in the highest echelons of education – which we sketched in the video – is just a consequence of the unfairly constructed rules upon which our society operates.

In the Czech context, the topic of gender equality resonates to an extent, but the discussion is made more complicated by the fact that the word “feminism” became more of an insult after 1989. Under communist rule, there was no mention of feminism in public space, and it was perceived in a negative way even by the majority of Czech dissidents. The regime that called itself communist promised freedom for women – and so the purposeful perversion of the International Women’s Day and the rhetoric of emancipation turned into a sad caricature of a backwards regime and its violent severance of the “natural” roles of man and woman in society. Mass amounts of women’s organizations working under the umbrella of a non-democratic state managed to poison ideas on cooperation and collectivity so much that, in the spirit of ongoing anticommunism and constant opposition to an almost 30-year regime, we still feel the negative connotation of these words. What is more, after 1989, the individuals who became spokespeople for feminism became, essentially, anti-feminists. The emigrants fresh back from their exile, among them the writers Josef Škvorecký and Oto Ulč, came to spread the news of the danger and aggression presented by feminism. Feminists were portrayed as hysterical, unattractive, and unsuccessful women who hated men. Describing oneself as a feminist in the first half of the nineties meant a series of curses followed you.

We do not want to repeat the many mistakes of Western feminism, usually focused exclusively on middle class, straight, white women.

We believe today’s feminism must be able to include as many people as possible across the social strata. We do not want to repeat the many mistakes of Western feminism, usually focused exclusively on middle class, straight, white women. There is a large minority of Romani in the Czech Republic who are being brought up in a segregated education system, which results in the majority of them not being able to achieve high school or university levels of education. This practice, started by the communist regime, continues and shows no signs of changing even now, 28 years after the transition to democracy. We need to finally face the question of how exactly our education system is inclusive when even the most prestigious schools discriminate against certain groups of students (as seen in our video). Is education really accessible to the socially disadvantaged? How would a Romani student feel in an environment this competitive and authoritative? The Fourth Wave considers it equally unacceptable to bully women and men, be it because they are gay or part of an ethnic minority – or for any other reason.

A large amount of people view weakness as an individual problem rather than as a result of an unequal treatment by society, a society in which the dominant view is that equal approach is something that a person must win for themselves. We often face the idea that if the students who shared their experiences for the video were strong enough, they would manage to stand up to the teacher’s behaviour, the argument being that if we ever want to succeed in our work we need to be able to stomach harsh criticism.  And we agree that criticism, even harsh, is necessary – but a professor telling his students that “only a woman could have painted shit like this” is not criticism. It is bullying and does not help anyone, in addition to unacceptable at any level of education.

No one asked for our opinion on anything before traditionally ingrained hierarchies were called into question.

While it would be premature to draw conclusions from the responses to one video, we can already see some changes that followed its publishing. There are the reactions of art schools themselves; all the institutions directly mentioned in the video were at least partially present in the discussion, be it on a virtual or personal level. Two meetings with the management of the institutions in question took place, one of them taking the form of a cooperation to look for possible anti-discrimination measures. It is, however, rather characteristic that we became equal partners for discussion only following the social pressure we created; no one asked for our opinion on anything before traditionally ingrained hierarchies were called into question.

There are plenty of topics we want to process in our videos, such as: homeless women; sexism in the workplace; motherhood and fatherhood; and unequal education for girls. As members of the Fourth Wave, we take part in the rapidly growing feminist activist platform that today consists of around ten independent groups. We participate in organizing demonstrations and events. We are included in regular meetings of (so-called) feminist institutions that aim to give name to specific issues of gender inequality in institutional structures, to formulate an ethical codex to assist in changing such an environment, and in finding solutions to these problems. It is fundamentally important to us that we are a part of a broader feminist movement capable of encompassing not only the breadth of the problems, but also the diversity of their solutions.

The authors are students and members of the Fourth Wave initiative.

Eva Svobodova and Martina Smutna
Eva Svobodová studies political science. She is working on a research project based on exploring the growth of Islamophobia and is specifically interested in the gendered context of the ideology. She works in an NGO that engages in problems facing Romani children at the preschool level. Martina Smutná graduated from the Academy of Fine Arts in Prague. She is an independent artist working in different artistic and political fields. She is a member of Studio Without Masters, an open-platform that brings together students and graduates from art academies to critically reflect on the relationship between students and educational institutions. Together with Marie Lukáčová and Hana Kuncová, Eva and Martina founded the feminist initiative Fourth Wave.
> see other articles <