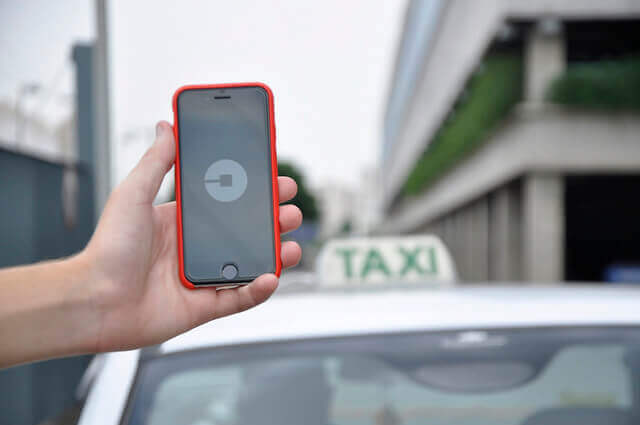 In April, the courts in Brno banned Uber from operating in the city. Uber is one of the biggest examples of the so-called gig economy or, in more general terms, platform capitalism (often mistakenly confused with sharing economy). In this kind of business, digital portals handle the supply and demand for small services – in this case, driving someone where they need to be. Plenty of critics point out that Uber is trying cultivate the image of a mere technological platform in order to avoid any responsibility for the workers that use it to offer their services in spite of being their de facto employer, i.e. a taxi business. For example, last year the courts in Great Britain officially decided that Uber indeed does employ its drivers and as such is subject to all the duties this entails.

In the Czech Republic, the topic of labor law has been connected to Uber but it was as an aside at best; the actual reason for the Uber ban in Brno (and for the as of now yet unsuccessful attempt to ban it in Prague) was an accusation of unfair competition based on the fact the drivers lack the licenses, and proper markings and equipment on their cars as opposed to taxi drivers: Uber was taking advantage of the fact it does not need to fulfill the same requirements as a standard taxi service.

It turned out Uber made systematic use of the Greyball software to deceive authorities investigating the company violating the laws in multiple cities and countries.

Taking rules for a ride

But there is more than one issue with Uber. Just this year, a former employee accused them of systematic sexism and discrimination, followed almost immediately by a leaked video of the cynical response of the head of Uber, Travis Kalanick, to a driver’s complaints about the company constantly increasing demands and lowering rewards. Another, fundamental, issue is the way Uber abuses the data gained by running its application – the company uses it to improve its digital functioning without any regard for the interest of its customers, drivers, and the public.

The shocking revelation The New York Times made at the beginning of March did not raise any outcry here either. It turned out Uber made systematic use of the Greyball software to deceive authorities investigating the company violating the laws in multiple cities and countries. The program analyses data regarding a person’s location, connects them to, say, information about their credit card and transactions or their social network accounts and isolates the people with high probability of being officials intending to check the requested Uber car. It would then tell them that there were no available cars in the vicinity, effectively making official inspection impossible without the investigators ever knowing they have been prevented from doing their job.

Uber lives or dies by its ability to operatively cover the demand for cars wherever they are necessary at the moment.

A month later, NY Times delivered again, this time with an article describing the systematic manipulation Uber inflicts on its drivers. Because the company formally lacks the employer’s privilege to dictate where and when employees work (something drivers usually consider the biggest advantage of working for Uber – and also something that Uber keeps using as an argument for not being a regular employer in court), it resorts to tricks from behavioral economics, subtly applied by its software. Uber lives or dies by its ability to operatively cover the demand for cars wherever they are necessary at the moment – and this simply cannot be done without some degree of control and coordination over drivers. To achieve this, Uber sends the next job to a driver while the driver is still doing the previous one – so the driver cannot just turn off the app after being done and has to actively refuse the next job, which is more difficult. Uber also uses gamification (game simulation making use of the weaknesses of human psyche that – among other things – lead to gambling addiction): it incentivizes drivers to break their personal records in order to motivate them to further work or moving into a different area where the company needs drivers at the moment. In order to develop these techniques, Uber supposedly employs more than a hundred social scientists and psychologists.

Non-ethical and illegal tricks intended to exploit labor have always existed. But both of Uber’s scandals are illustrative of the process of avoiding and attacking established business principles through digital platforms that operate upon data, algorithms, and personalized interfaces. These methods are a qualitative change for the worse, merely means (or behaviors) by which Uber evades business checks and balances. Personalized data manipulation – as with the use of Greyball software – makes its operative functions difficult to assess for an inspector or manipulated customer – in fact, difficult for anyone without access to the whole system.

We need to find proper political solutions for the challenges platform capitalism poses. For starters, the courts should consider the systematic manipulation of drivers as the final piece of the puzzle proving Uber to be an employer. By means of this fact, then, all the requirements and duties demanded of employers would apply to Uber. We need to create methods to hold Uber accountable via demanding its platforms be transparent regarding the principles of their function in order to prevent (even more of) invisible manipulation, exploitation, and law avoidance.

Kateřina Smejkalová
She is a political scientist, working on social impacts of technologies, especially of digitalization of economy and work.
> see other articles <