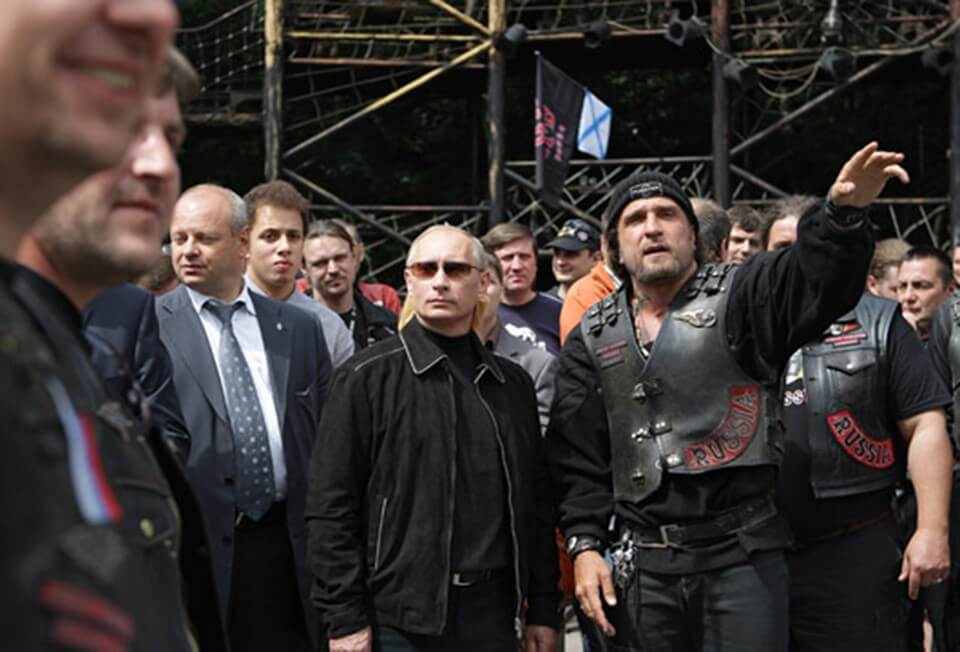 Night Wolves, as the ensemble calls itself, date back to the Soviet eighties but their political engagement starts with the rise of Vladimir Putin whom they have openly supported in several ways, from fairly harmless PR stunts and election campaigns (in exchange for state funding, obviously), but there is a darker side to their activities: members of the gang participated in the takeover of Crimea and “keeping the peace” there afterwards, as well as fighting for the pro-Russian separatists in the Donbas. They also serve as a propaganda arm for the Russian government, periodically touring the Donbas area and eventually Europe putting on a positively riveting show of nationalism, historical revisionism, institutionalized homophobia and showing just how the plucky little Russia constantly defends itself against the monstrous cultural assault of the West.

Which would make them a harmless bunch of clowns if people did not take them seriously. And there were countries with a somewhat reasonable approach – the Americans, despite only having been involved as a provider of the bikes, put the bikers on a sanction list in 2015; Poland has tried to deny them access multiple times with varying degrees of success, possibly arguing that adding further Russian propaganda into the discourse would compromise their own. On the other hand, last year’s biker rally in the Balkans even met with mixed response in the massively pro-Russian Republika Srpska when, after rather unsurprisingly welcoming them as partners-in-crime (“Our motorcycles are spaceships under the stars, through which we write history, forever linked with the fight for Russia’s future” being a serious contender for the Stupidest Metaphor Of All Time award) their government  noted that Russia sent bikers (sans bikes, no less) instead of the promised financial support. And then there is the Night Wolf base in Slovakia – ostensibly a museum that just happened to double as a training ground for Slovakian nationalist paramilitaries…

In the Czech Republic, though, things are a bit different; both are still (somewhat) democratic countries and both are subject to a vast amount of Russian propaganda with Russia likely viewing them as a potential gateway to the EU and its destabilization and having made a nice progress along the way given our beloved President, may he use a Russian plane on his next ass-kissing trip, being in their employment already as well as a rising number of politicians declaring openly pro-Russian sentiments.

Being seen the company of the Night Wolves still causes some controversy, so there were only two big-name politicians present on the Czech side; sadly, those two both happened to represent parties that should, going by their programs, be left-wing. Having a ex-MP (though still the head of the party for Prague) for the Communist party openly declare support for the right-wing dictatorship current Russian regime leans to would sound shocking were one not familiar with the politics of the Czech communists – a party led by a hardline Stalinist faction hellbent on staying in power whatever may come and bugger ideology anyway. Something to keep in mind for the European Parliament elections coming up in two weeks: while the communists try to display themselves as dynamic and progressive in there, all it takes is one look at their leadership to be disabused of the illusion.

Speaking of illusions: the second politician on the scene was a long-time supporter and widely known patriot (read: nutjob) MP and former vice-chairman of the Social Democrats Jaroslav Foldyna. Unlike last year (on the left) he was too busy to assault protesters on account of handing out lollipops and candy to the opposition “so that they may chill out”. All in all, the events went mostly without conflict – some banner-tearing occurred in a gentlemanly effort to spare the Russian bike gang’s tender feelings the sight of letters forming the curious inscription “Hitler and Stalin started WW2” – not entirely unwarranted since they seemed genuinely unaware of this three years ago (“This man is either a fool or a provocateur!”, shouted the clown-in-chief).

But these are all minor details and episodes without much significance; what the Night Wolves really achieved during the brief trip to the Czech Republic was putting another nail in the coffin of the Czech left-wing parties.

Anti-communism is very much a thing in Czechia and has been since the nineties. Even these days, the surest way to discredit something politically is to call it “communist” as the recent fiasco concerning gathering data regarding the number of empty flats in Prague showed. But there is a lot of mental shortcuts involved between Communism and its negative connotations; most Czechs do not seem to make much of a difference between the words “Communist”, “left-wing” and “Pro-Russian” – a notion that needs to be disabused for there be any chance of making things right. Er, left. The Communist party has once again showcased its support for Russia over its support for any sort of left-wing ideology; the ostensibly pro-European Social Democrats have shown a distinct lack of care about their public image right before trying to make a push for the European Parliament while one of their most vocal members hands out lollipops in support of Russian nationalist propaganda. That can’t be right. Er, left.

Gestures like these make it extremely difficult to take the established left-wing parties’ statements seriously. There is not much of an electorate for them – the Czech communists bank almost entirely on nostalgia for the pre-1989 regime, which only holds true for a slowly dwindling amount of voters; their direction towards accepting and adapting the Russian propaganda might quite well be a gamble at rallying the “EU is pure evil” conspiracy crowd  since the party’s actions have, again, absolutely nothing to do with communism. They support the billionaire PM Babiš who runs the country solely for personal profit, for Marx’s sake.

Social Democrats are a bit more complicated – they used to be one of the two major parties in here before Babiš showed up on the scene, and they appear to still harbor dreams of getting back to the top despite their electorate having rapidly dropped. Failing at nutjob control by not stuffing Foldyna into a well-buried locker somewhere until the bikers get the hell out of Prague is a minor failing at best but they have a reputation to contend with due to the unlucky fact of having been founded by the loudest pro-Russian voice in the country, President Miloš Zeman, who still has plenty of support within the party itself. And that is a massive burden when it comes to securing the votes of left-inclined liberals, as starved for options as they are. The good old anticommrussleftianism good old Czechia loves so much strikes again. And the countdown to the next elections is already ticking.

Night wolves: they came, they saw, they shot the Czech Left in the foot. And we cannot even be sure if it was on purpose.