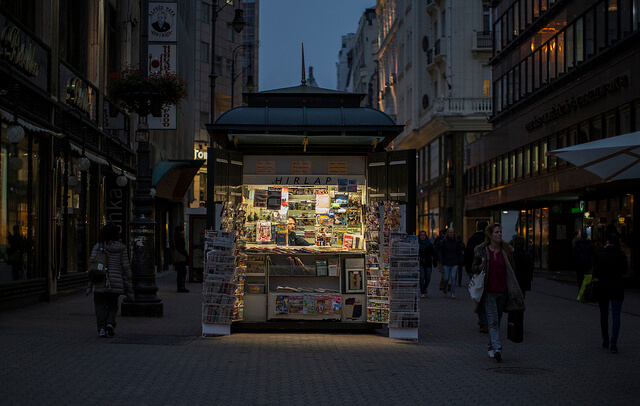 According to MMonline, the Office of Economic Competition and the National Media and Communications Authority have approved a transaction concerning the acquisition of the Pannon Papers Company by the Mediaworks group. Mediaworks already owns 8 regional journals as well as Népszabadság (People’s Freedom).

Népszabadság is the daily political newspaper with the highest circulation in Hungary. The paper was founded on November 2, 1956, during the 1956 Hungarian revolution, replacing the authoritarian Rákosi regime’s paper, the Szabad Nép (Free People). Afterwards, and throughout the whole socialist period, the paper functioned as the party state’s official daily newspaper. Afterwards, until 2015, the Hungarian Communist Party’s successor, the Hungarian Socialist Party (MSZP) owned a large share in it through a foundation, while different foreign companies took turns in its ownership. Since 2014, an Austrian businessman owns Mediaworks Ltd, which also publishes Népszabadság, but many suspect that Zoltán Spéder, the banker-turned-oligarch, was actually involved with the paper behind the scenes.

Since the Pannon Papers Company owns five regional journals, Mediaworks will become the media group with the second largest income after RTL Klub following this transaction.

A week earlier, MMonline published another article, stating that Optimus Press Ltd, which owns 20 million HUF in registered capital, will buy Mediaworks, the group owned by Heinrich Pecina, who has ties to Zoltán Spéder. Spéder is a Hungarian media mogul who has recently fallen out of favor with the governing party, Fidesz.

Zoltán Spéder recieved his diploma in economy in 1987, and was a member of the College for Advanced Studies at university, where he met many of Fidesz’s founders. Between 1995 and 2007, he was the director of the biggest Hungarian bank, OTP. According to experts, he was the reason behind OTP’s successful international expansion. In 2007, Spéder had an argument with Sándor Csányi, the richest person in Hungary and also one of the most powerful leaders of OTP. After the argument, Spéder founded his own bank, FHB. After 2010, Viktor Orbán entrusted him with the integration of mutual savings cooperatives and the Hungarian Post Office, with the goal of creating a large Hungarian bank. Meanwhile, Spéder also acquired significant investments in the media. He owns CEMP, which controls radio stations, print journals and the most prestigious Hungarian news outlet, Index.hu as well.

On 7 June, 2016, the government suddenly – and without a clear reason – attacked Spéder. On that day a law was passed (which was handed in to Parliament the day before), which stopped the integration of the mutual savings cooperatives, and the Hungarian National Bank fined Spéder’s bank hundreds of millions of forints for a business conducted three years previously. Meanwhile, the media outlets of the government started a thorough character assassination, Italian paparazzi were even hired to follow Spéder everywhere. Two days later the Prosecutor General’s Office ordered a search warrant at Spéder’s companies and his apartment. Police confiscated documents and data carriers. In response to the events, Spéder’s companies’ stock went into freefall, and he lost most of his wealth. The question was what would happen to his media portfolio?

Several people affected by this business have communicated to us that there are several people behind Optimus Press who have previously been involved in the foundation and acquisition of media outlets by Fidesz. This was only mentioned in passing in the MMonline article.

According to Marketing & Media online, Gábor Mátrai will play an important role in the life of Optimus Press Ltd after the transaction. This was also confirmed by one of our sources. Mátrai was the deputy general at the National Media and Communications Authority following Annamária Szalai after 2010 – the position could hardly be called a post independent from Fidesz.

At the beginning of the summer, when Fidesz’s war against Zoltán Spéder began, we reported that the ultimate goal, or simply an additional benefit of this attack could be the procurement of the oligarch’s media companies, or the companies linked to him in some way. Of course, this doesn’t automatically mean that these companies would thereafter be controlled or owned by Fidesz. For example, one of the largest Hungarian online publications owned by Spéder, index.hu, went to Lajos Simicska, who had proclaimed in his newspaper, Magyar Nemzet (Hungarian Nation), that the website must not fall under the influence of the government.

Lajos Simicska was Viktor Orbán’s college roommate, the second man in Fidesz until 2015. After the regime change he created Fidesz’s financial background, and during 1998 and 1999, he was the director of the Hungarian tax office. After Fidesz’s 2002 defeat at the parliamentary elections, he created the media background connected to Fidesz by buying the Magyar Nemzet (Hungarian Nation) daily newspaper, then founding the Hír TV (News TV) channel, as well as acquiring several other media outlets. After 2013 however, the personal tension between Simicska and Orbán grew continuously, and finally led to a break between them in 2015. On the day later widely referred to as „G-Day” (Simicska repeatedly called Orbán „geci” in several interviews – the word translates to jizz or spunk in English, but in context would be closer to calling someone “cunt”), several editors at Simicska’s papers resigned at once and went over to media outlets that remained loyal to the government. The angered Simicska’s infamous cursing happened in response to these events. Since then, the media owned by Simicska have steadily become more and more critical of the government, while the oligarch’s companies win fewer and fewer public procurements and the governing party attempts to squash them through administrative measures.

Previously, there were rumors surrounding the above-mentioned Mediaworks about the fact that Árpád Habony and Fidesz might be aiming at bringing regional news outlets with a significant impact on local public life under their thumb. This is undoubtedly what is happening right now.

The map of Hungarian media power relations could undergo a radical transformation.

Árpád Habony is Fidesz’s mysterious background man. He appeared near Fidesz after 2002, and even though many articles have dealt with his past, as of yet there hasn’t been a clear answer as to how he became Viktor Orbán’s most trusted advisor. Habony doesn’t even receive a salary from the party, or from the government, but his name crops up in connection to corruption scandals all the time. Currently, since Simicska’s departure from Fidesz circles, he is entrusted with resolving the media situation. In the last year and a half Habony has founded many newspapers and online news outlets, and has taken the second largest Hungarian TV channel, TV2 (bought by Fidesz) under his direction.

According to our sources, the acquisition of Pannon Papers was the opening act of Mediaworks’ sale, which will be completed soon.

In terms of regional and urban influence, an enormously important media portfolio will fall under Fidesz’s control if this happens. Pannon Papers owned the Dunaújváros and Fejér county newspaper, the Zala Gazette, the Journal (Veszprém) and the People of Vas, while Mediaworks owned the New Pannon Journal, the Heves County Gazette, 24 Hours (Komárom-Esztergom county), the New People’s Paper (Jász-Nagykun-Szolnok county), the Somogy Gazette, the Békés County Gazette, the Tolna People’s Journal and Petőfi’s People. Not to mention the online portfolio covering local sites which are currently basically in a monopoly position in their respective regions.

You can browse Mediaworks’ entire portfolio here, and the Pannon Papers Company’s here.

Apart from the regional papers, the fate of Népszabadság (People’s Freedom), Nemzeti Sport (National Sport) and Világgazdaság (World Economy) is also in question, and out of those Népszabadság is the most interesting. According to our sources, the ultimate goal of these acquisitions was to gain control over the county newspapers and online news sites, and Népszabadság was simply the icing on the cake. Which is why the fate of the paper is so problematic.

There is more than one possible outcome. The slow death of Népszabadság, perhaps the persecution of its journalists until they leave, the paper’s transformation in some way, or perhaps its sale to an independent party. However, let us not forget that if the latter were to happen, it would only happen with the permission of the governing party. Rumour has it that if the paper was sold, it might go to the Brit Media Group linked to Slomó Köves, owner of two other prominent Hungarian news outlets, the independent 168 óra (168 hours) and Klubrádió (Club Radio).

If these transactions happen in this manner, it would mean that the map of Hungarian media power relations could undergo a radical transformation. Fidesz would achieve considerable reach amongst the urban and regional population by receiving this amount of control over the county papers, which would give them an enormous political advantage. And on the other hand it would mean a great loss for the independent press in Hungary.