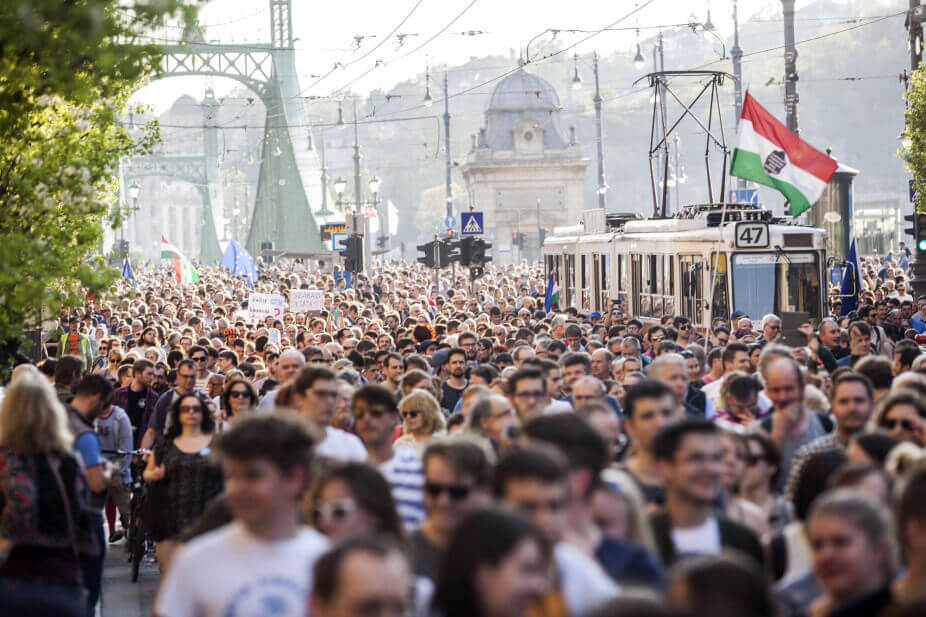 It’s an incredible feeling to stand before the Parliament and listen to the voices of thousands shaking the windows of the building with the cry of “Free education!” Last year we also stood here with the same message. And even though right now the fate of Central European University (CEU) is the most debated question, it’s not difficult to see that the law against it is about a lot more than “just” destroying an institution of higher education. Today, the freedom of Hungarian education is a lot less alive than it was a year ago. And if anything, this is undoubtedly reason enough to protest.

Recently, the people of Budapest reacted with visceral outrage to the law directed at CEU, and more and more smaller cities have joined in protest. And this is great, really. We need to protest for CEU and against the arrogance of the government, which uses the power of law to shape our lives in any way they please.

But when thousands march in the streets of Budapest to demand free education, it’s important to keep in mind that there should be a lot more behind this otherwise just and important demand than what it currently concerns itself with.

Hungarian education today isn’t just bleeding from a thousand wounds; it has already been executed and is right now being thrown into an unmarked grave. The educational movement of the past year perhaps hasn’t been without merit, since it spread the news to many that the problem is much greater than we thought.

But the process has accelerated.

It all started when the new public education law passed in 2011, which brought very few people to the streets at the time, even though the government’s goal with it was obvious: to end free education and to subjugate everything and everyone in the field to the government’s will.

Then came centralization: the Klebelsberg Institute as the administrator for all public schools brought chaos and intimidation. Instead of a sustainable career path, teachers were forced into a tightly controlled “career course.” Hope for a better life was ripped from underprivileged students by reducing the minimum age to leave school to 16. By making the textbook market state-controlled, it became impossible to choose textbooks freely, while the propaganda textbooks ordered by the state are absolute trash.

A bureaucratic system built on folly is slowly suffocating public schools. More and more institutions have chosen to be supervised by the Church just to get out from under state control, while students have been forced to choose between studying ethics or religion – a method for the state to implant its own ideology through compulsory subjects. The vocational education system has been destroyed, and right now 30,000 students are studying for graduation tests which violate their rights (the terms for the tests in vocational training underwent major changes just a few months before the students were to take them, thereby putting these students in an unjust situation).

Meanwhile several puppet organizations have sprung up, all falsely advertising the government’s willingness to cooperate. An example of this is the Public Education Roundtable, which the government used for fake consultations with the assistance of organizations created and financed by them, such as the National Pedagogue Faculty and the Professional Association of History Teachers – which are the propaganda twins of the History Teachers’ Club, an organization that has existed for nearly two decades. Right now the Human Resources minister, Zoltán Balog is trying to lure students into a new student organization, while ignoring the warnings of any already active student organizations. All of this serves one purpose: to show that the government is indeed ready to negotiate. But let there be no doubt, this is simply rhetorics; there’s no real consultation, only subservient nodding. These are the organizations creating the pretense of legitimacy for the harmful, premature and inept decisions made by the government.

There is a long list of events that led to the situation we are faced with today. And it is still not over: today the government is getting ready to end educational freedom for good.

The goal is obvious: to force students into a vocational training system that is sure to not provide them with competitive knowledge.

Valeria Csépe, the new Ministry Commissioner tasked with putting together a new national educational curriculum is making rounds in the news, telling everyone how much better the new curriculum will be as compared to anything that came before, and how Harry Potter will be taught in schools (when will we finally understand that this isn’t what educational freedom means and learn to not believe these empty slogans?), while the government, taking advantage of the fact that few are paying attention to public education right now, is getting ready to limit how many children get to attend high school, vocational high schools and vocational secondary schools with set admissions numbers. The goal is obvious: to force students into a vocational training system that is sure to not provide them with competitive knowledge or to prepare them for life before stepping into the labor market. And from that point forward, there won’t even be a semblance of educational freedom. We will be divided into deserving and undeserving, and the latter will be the majority.

If we fight for free education, let us think of the tens of thousands who never reach higher education, but are just as oppressed by the system as those who study at universities. That vocational education has been destroyed. That for children living with disabilities, for the underprivileged, higher education is basically unattainable, regardless of their abilities. That for Roma children, going down this road is even less likely. That today segregation isn’t a trendy and mobilizing topic, and yet it is our duty as a society to speak up for those who are cast out of this system built on inequality.

Yes, the time has come for us to demand free education. But we must avoid the trap of exclusion: education is a complex system that is currently suffering from oppression on every level, affecting every person directly and indirectly related to it. Let us think of all these people when we go to the streets, and let us act to change their situation. This is our duty as well as our interest.