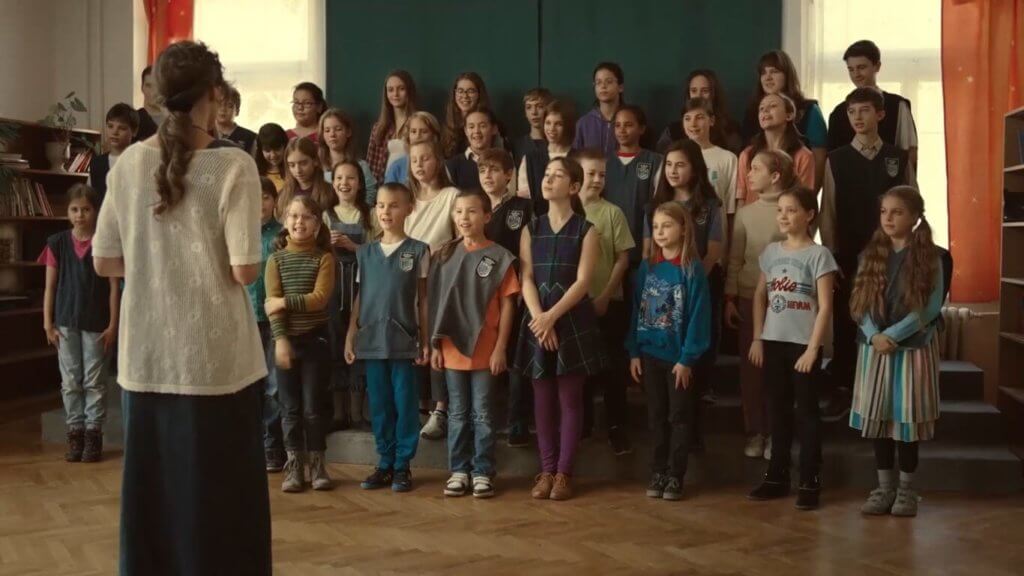 Still image from film trailer for "Sing" on vimeo.

“[…] every attempt to live within the truth must necessarily appear as a threat to the system and, thus, as something which is political par excellence.” – Václav Havel

Reactions to the Academy Award-winning Hungarian short film, Sing (the direct translation of the original title would be Everyone), were extremely varied. Some thought that it presented childhood and educational problems brilliantly, while some thought that the film was an underdeveloped, sentimental and incredibly utopian creation. The latter is undoubtedly true: Sing is a utopian film. Moreover, it is a revolutionary utopia.

Although most reviews didn’t emphasize this, it would be difficult to argue that Sing isn’t a political film. How could we not see the political context in a story in which the vulnerable and powerless resist the powerful together? Where the oppressed hold those who command and direct their lives accountable for the injustice of their actions? Sing is a political film, but it’s not obvious what kind of political message it conveys. I know nothing of the director’s, Kristóf Deák’s, personal political beliefs, and I don’t care what kind of message he wanted to convey in the film; what interests me is what kind of picture it paints about power and resistance.

Sing is about a children’s choir in a typical Hungarian elementary school in the early ’90s. The story is mainly told from the perspective of a young girl, a newcomer at the school, who in the beginning is extremely enthusiastic about singing in the choir. That is until the music teacher, Miss Erika, tells her not to sing aloud, only to mime singing, because she is simply not good enough. During the course of the film it becomes clear that Miss Erika has forbidden several members of the choir to sing aloud, and there are only a few children who are actually allowed to sing. The choir still wins many awards, and at the end of each rehearsal, everyone gets chocolate. If the singers and mimes perform well enough, the choir could even go to Sweden to participate in an international competition, as well as at many other “pretty great places.” But when one of the choir’s star singers realizes the deception, she doesn’t stay quiet. She sees Miss Erika’s methods as unfair, and says so in front of the entire choir. The children start plotting behind the music teacher’s back, and enact their revenge at a prestigious event: when they are supposed to sing, none of them sing aloud. The whole choir only mimes the song. Only after Miss Erika storms off the stage in anger do they start singing, with every child singing aloud.

According to some, Miss Erika built a sort of paternalistic dictatorship. As one critic wrote, what Miss Erika did was “pure communism: all you have to do is mime, while the state supports you from the work of the other losers.” In the Erika-regime, the “working few” carry the other “non-workers.

However, this is not true. Miss Erika is not rewarding achievement, but rather talent. And that is a big difference. The mutes and the singers aren’t separated based on how hard they work, but on how beautiful is their voice. They are rewarded for something with which they were born, something inherited, not for their work and merit. Miss Erika doesn’t believe in a performance-based meritocracy, but in an inherited, excellence-rewarding aristocracy. In this sense, the revolt of the children is actually a “civic revolution” demanding equal opportunities.

If we look at it this way, Sing is a liberal film, which simply reiterates an idea that has existed since the Enlightenment: if the government doesn’t guarantee the people’s freedom and the good of the public, then the people have a right to revolt and banish the oppressive regime. But there is more here. At the end of the film, when the children’s mute singing drives Miss Erika away, it does not lead to the establishment of a new, better power structure. At the end of the film, no one stands in front of the choir to conduct them. We don’t know whether the choir wins the competition. In fact, we don’t know what follows at all. All we know is that finally, everyone can sing.

The film’s key moment actually takes place during the first scene, when the principle asks the main character, Zsófi, who’s later relegated to miming, whether she likes to sing. Zsófi loves to sing, and this love, not the choir’s achievements, or the chocolate or the promise of a trip to Sweden is what brings her to the choir. But this system isn’t set up so that we have the opportunity to do what we love, to sing together – it only does that on the surface.

In reality, the choir subordinates our wishes and opportunities to a system of expectations – of competition – which has nothing to do with how we want to live, and which isn’t important to us at all. The competition is important to Miss Erika, it’s the only thing that matters to her. If she were a mathematics teacher, she’d want to go to Sweden with her math students; for her, the students and the singing are interchangeable tools in order to gain material advantages (Swedish trip, recognition from the principle), which are completely inconsequential for the child who joined the choir because she loves to sing.

The moral of the film is the incredibly simple truth of the moment of revolt.

The children cease to be autonomous human beings, and become tools in order to reach goals that are not their own, that they did not choose, that are foreign to them. Classic leftist authors refer to this phenomenon – and rather appropriately – as alienation. This injustice – to term it in accordance with protesting Liza’s proclamation of “this isn’t fair” – is what the children revolt against: their problem isn’t that not everyone gets to compete, (since de facto everyone could participate in the competition, which means all win, as Miss Erika frames it), but that not everyone gets to sing.

The moral of the film isn’t that if we let everyone sing, we get more chocolate and more trips to Sweden (that is, that freedom is profitable). It’s the incredibly simple truth that if we let everyone sing, then everyone can finally sing. The children’s mute singing is the moment of revolt, of revolution. And like every revolution, it is an event of truth – as Alain Badiou, French philosopher, calls it – wherein the singing competition’s basic truth takes shape: that everyone in the choir is actually mute; no one is doing what they came to do; none are free to sing together with the others; and that everyone is subordinated to a system of values and expectations that are foreign to them.

And this truth sets us free. A system can only stay in place as long as its basic lie is not exposed. Everyone has to believe that everyone else is singing. When this becomes impossible, when the truth comes out, then Miss Erika comes up with another lie – that a few will have the opportunity to sing and seemingly get the chance to do what they love, while others don’t –  is actually good for everyone: they all get to go to Sweden this way.

This explanation, like the previous one, is believable for a while. For a while, you can believe that all you wanted was to go to Sweden, that victory is important to you too; after all, you didn’t come to sing. For a while, you can believe that the goals and values that you didn’t choose for yourself are your own. However, Miss Erika’s explanation proves to be just as fake as the illusion of everyone singing, when half the choir is only miming. The last scene of the film is the exposure of this lie, an exposure to which the system can’t hold itself up against.

Sing describes the world we live in: a social system which, itself, is nothing more than the lie(s) told about our lives.

As some have correctly stated, Sing describes the world we live in: a social system which, itself, is nothing more than the lie(s) told about our lives. A system that says that we attend rehearsals to sing, when in reality we are pawns in the conductor’s and the school’s aspirations. A system that says that we are successful, when we are really burnt out and exhausted. That says we have a right to have a say in what our lives are like, when the powerful make decisions in our stead. That signals to the country flourishing, and a world in-order, while in reality the world is overcome by poverty and injustice. And that makes us believe in these lies so successfully, that often we feel as if they were our own.

Sing shows the possibility of revolution. Not by punishing the powerful through bloodshed, destruction, and false and empty mutiny, but through the possibility of revolution as a moment of truth, a moment when the truth governing our lives shows itself for what it is, and when reality collapses under the weight of this truth. As such, Sing is utopian. Because our lives are so intertwined with the lie(s) told of how and why we live, it seems that there is no truth that could surface. It’s as if it the most reasonable explanation for wanting to sing is merely because you want to win a competition, with the aim being to win titles and materials possessions.

It seems that change is impossible. What the children do is impossible. To state the truth of the system is impossible. But here we reach the most basic question of revolutionary utopia: why else should we attempt the impossible if not to be able to live the way we want to live?

Zsolt Kapelner
Zsolt Kapelner lives in Budapest and is a regular contributor to Kettös Mérce. He writes on the politics of the Visegrád region (Poland, Hungary, Czech Republic, Slovakia). He also teaches philosophy at Budapest’s Eötvös Lórand university.
> see other articles <