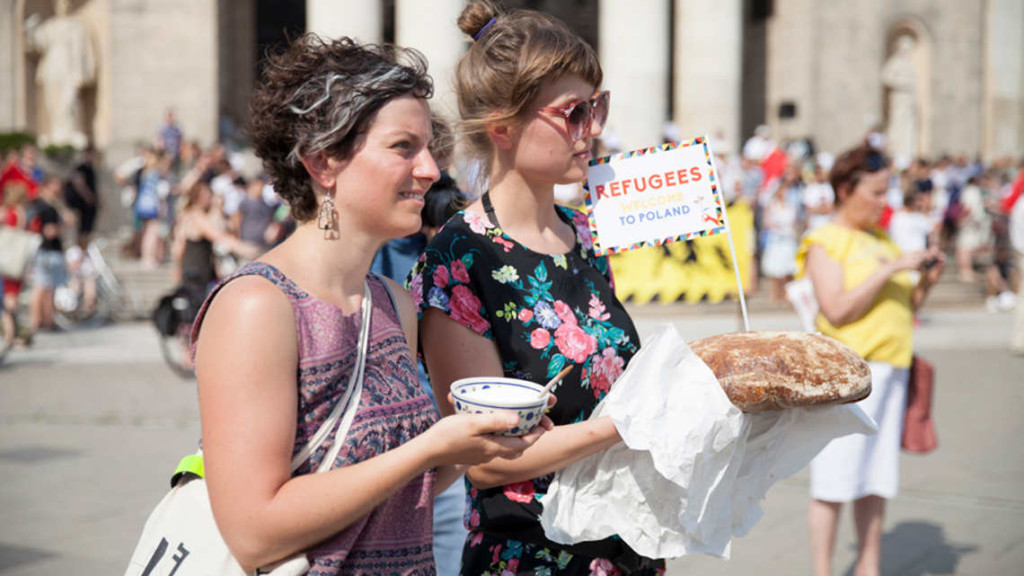 We do not want Poland that is walled-in and narrow-minded, where the representatives of Polish government fail to understand the phenomena taking place in the world, and mistake refugees for terrorists. The refugees are not terrorists. They are victims to terrorists. We must not ignore their suffering. The blood that had been flowing through the Middle East was finally spilled in Europe. In Paris we could see what for people in Baghdad, Damascus and Beirut have been everyday scenes. Now, when we have experienced violence close to home, we must stand united and rational.

Meanwhile, Witold Waszczykowski, minister of foreign affairs, called the values that built the post-war Europe – human rights, clear-headed distance, readiness be to self-critical – “a dispute of befogged lefties.” He thus unwittingly rendered a service to the terrorists, who want to antagonise and destabilise Europe. Who want Europe that turns its back on the migrants, ignores the war in the Middle East and lets the ISIS terrorists consolidate their influences.

We cannot pretend that the migration crisis is none of our business.

He was joined by Konrad Szymański, minister of EU affairs, who said that “in the face of the tragic developments in Paris, Poland cannot see political possibilities to carry on with the [EU] agreement to relocate the refugees.” Just when unity and solidarity with Europe is expected from us, Poland is giving in to threats and is backing away, which is, at the very least, an inappropriate attitude for a country that counts so much on its allies in terms of its own security.

We cannot pretend that the migration crisis is none of our business. We are part of Europe and, just as the rest of Europe, we are co-responsible, both politically and morally. Politically, because we must not let ourselves to be isolated as a country. Morally, because as a democratic society we must guard European values: equality, tolerance and human brotherhood.

The Poles, over their stormy history would time and again find refuge outside of their country’s borders. Today, the Law and Justice party is telling the Poles that 7,000 refugees will turn the Republic of Poland into an Islamic caliphate. For Europe it is hard not to take it as offence, as what the EU is asking us for today is so much less than what we have received from it.

We want to strongly emphasize that there is a Poland who will not be carried away by the racist and xenophobic hysteria fed by the circles of the nationalist right.

The newly-appointed members of Polish government gave us an appalling show of incompetence and ignorance, fawning on the xenophobic and anxiety-driven feelings that have been on the rise in Poland.  The effects of this politics can already be seen in the streets, with acts of senseless violence becoming more frequent. Social media are boiling with hate speech, and racist and xenophobic contents are being spread which are against Poland’s Constitution.

We, the undersigned, do not wish for all of Poland to be identified with the politics of the people who have made all of this happen. We want to strongly emphasize that there is a Poland who will not be carried away by the racist and xenophobic hysteria fed by the circles of the nationalist right. Not in our name.

The letter was signed by more than 5000 political, intellectual, and social leaders in Poland.