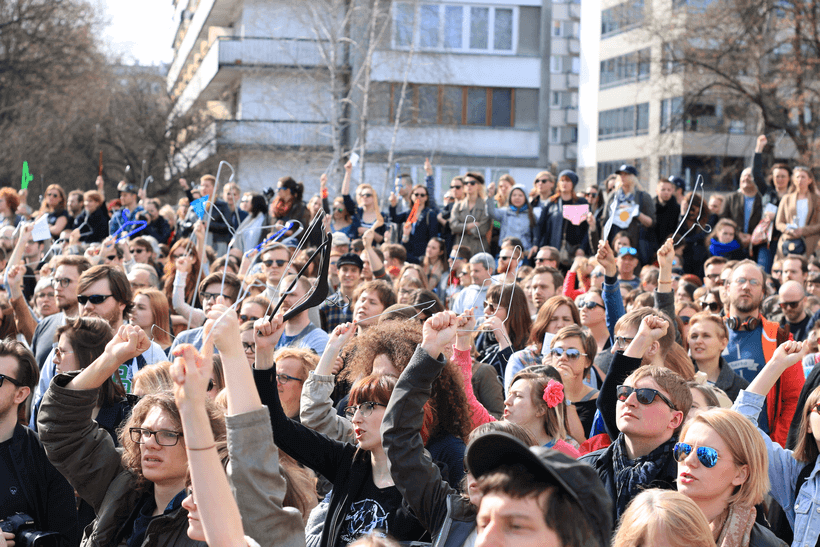 Yesterday Polish MPs began debating two competing bills on the legality of abortion. Catholic lobbyists want to effectively ban abortion under a penalty of prison, while the Save the Women initiative proposed a slight liberalisation of the current abortion law. A viral campaign under the hashtag #CzarnyProtest (BlackProtest) #WhyDoIStillHaveToProtestThisShit organized by Partia Razem (Together Party) swept through the Polish internet, with people expressing solidarity with Polish women by wearing black. A protest took place in front of the Parliament yesterday. Experts predict that the proposed bill will not have a majority in Parliament.

Poland’s abortion law is one of the harshest in Europe.

It is already draconian. People who call it a compromise don’t take into account that there is no more “compromise” since 2015, when the Constitutional Court, pressured by the Catholic lobby, ruled that doctors who are hiding behind the “conscience clause” don’t have an obligation to tell women whom they refuse to help where and how they can get this help and legally terminate their pregnancy. Theoretically, women in Poland are allowed to terminate a pregnancy when their life is at risk, when the foetus is irreversibly impaired, or when the pregnancy is a result of a criminal act. But in practice, women often can’t get help.

This puts Polish women in a very tough spot. We know from polls that one in four women in Poland terminated a pregnancy at least once.

They have been having abortions in the past and they will continue having them, but illegally and in dangerous conditions. Some of them can afford going abroad to get legal and safe help. But women from disadvantaged backgrounds don’t have that option. That’s unethical. The poorest women are often from smaller cities, have lower education and have very limited access to knowledge about safe sex. The current draconian law was passed over people’s heads, it was a deal made between politicians and the Church, while a million signatures against it were simply thrown in the bin. Another thing is that this law guaranteed that we’ll have sexual education in schools, but that has never been delivered. So we raised a generation that has no idea about safe sex and as a result has no knowledge about protection against unwanted pregnancy, diseases, or sexual violence.

The attempt to liberalize the law is an attempt to pass similar regulations as those in the majority of European countries that would simply allow women to make use of their human rights. This project allows terminating a pregnancy up to 12 weeks, or later where there is risk to the life or health of the woman, when the pregnancy is a result of a criminal act, or when the foetus is malformed. It also introduces compulsory sexual education in schools.

Teenagers have sex whether we like it or not and it can’t be stopped by a strict law. Teenagers will simply do it anyway. But we can protect them, by providing them with access to knowledge about safe sex.

The idea of making the law stricter is a barbarity that brings Poland closer countries such as Salvador, where women are put in prison for years for miscarriage. It means taking away women’s human rights and dignity. It’s a sign from the state that their health and life doesn’t matter. It will also take away access to prenatal diagnosis. Today, prenatal screenings are used not only to terminate a pregnancy when the foetus is malformed, but also to start treating the foetus. But if the law is passed, many doctors will not risk sending their patients to prenatal diagnosis. Not only does that mean that women’s life and health will be put at risk, but also that there will be impaired babies born, who could have been healthy, but won’t be because they will be barred from prenatal treatment.

This article was originally published in Polish in Gazeta Olsztyńska.