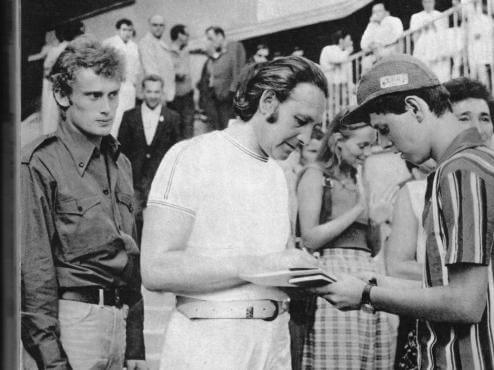 In The Promised Land (1975) there is a scene, in which Moryc (played by Wojciech Pszoniak) walks out of Grunspan’s (Stanisław Igar) bureau de change after he had said that he won’t be giving back the money he had borrowed anytime soon because he needed the funds to start up his business. Sweating, he sits down to catch a breath and after a moment he waves to the camera. This gesture wasn’t in the script, but the actor would always do it out of frustration at the director who wouldn’t say “cut” during the shot. Andrzej Wajda decided to put the sequence in the movie. When he was asked what it meant, he answered that everybody can interpret it for themselves. For me, this brilliantly illustrates the courage and artistic genius of this director.

During his debut film Wajda already showed the traits that would later on make him successful. These were courage, intuition, ability to see opportunities and use them as well as a great choice of collaborators who were creative on their own and didn’t serve simply as tools in the director’s hands. This brought about effects very quickly. Wajda’s second film, Sewer (1956), was a great international triumph receiving the Special Jury Award in Cannes. After this almost every single one of his movies were prompting discussions, dividing enraptured audiences and critics which would engage in polemics. It is not only that it is impossible to tell the history of modern Polish cinema without Wajda, but that he simply dominated the entire of its history himself. He was a co-creator of the Polish Film School movement and the cinema of moral anxiety, discoverer of Krystyna Janda, Zbigniew Cybulski, Daniel Olbrychski and the only Pole with an Honorary Oscar as well as the first Polish recipient of the Palme d’Or (in 1981 for Man of Iron).

The international success was of great importance. He had achieved what is rarely achieved. He turned the world’s cinema audiences on Poland, telling stories that touched upon local issues and adapted polish literature for the big screen. Despite many offers he decided not to emigrate. From time to time he shot movies abroad, such as in 1962 when he made Siberian Lady Macbeth in Yugoslavia, however they were not his best known works. The exception of this was Danton (1982) which was only shot in France and not Poland because of the imposition of the Marshall Law in 1981.

Today, Wajda’s work (cinematic, as well as theatrical and television) is a finished chapter. A chapter to be revisited, reviewed and reconsidered.

There are certainly some movies that, despite the passage of time, can still impress contemporary audiences. One of them is The Promised Land (1974) – a piece of work that is comprehensive; its grandeur is stunning and still relevant. Other examples are Everything for Sale (1968) and The Maids of Wilko (1979) which make the viewer want to revisit them time and time again.

Wajda’s body of work is so rich that one doesn’t have to pretend that every film he did was good. As is the case with all great artists. There have been many moments when the words have been said, “He’s finished”. There is also no point in pretending that his movies shot after 1989 were not disappointing. Although, all in all, Wajda managed to pull himself together in this new reality. This is especially when one compares him to the other giants of the People’s Polish Republic cinema, such as Wojciech Has, who didn’t make a single movie after 1989 or Krzysztof Zanussi, who mostly monetized on his previous achievements.

But Wajda’s genius was in part his ability to adapt to the current situation. For sixty years he was always apart of the mainstream, ready to react to reality, as a result his movies were recording the political and social situation of Poland and Polish cinema, at the end of the 50s, still submerged itself in the topic of war. But making use of the thaw (Sewer, Ashes and Diamonds, Lotna), the 60s were the years of “small stabilization”, although still with ambitions and ready to ask relevant questions about the present (Innocent Sorcerers) and the past (The Ashes). The end of the 60s was defined by a sense of changing times (evident in Everything for Sale and Hunting Flies). The beginning of the 70s was marked by a new development brought about by Edward Gierek. Films from then on were shot in color and big money became available for blockbusters. This was the time when Wajda shot The Wedding, The Promised Land, and, in co-production with the English, The Shadow Line. The end of the decade was the time for settling accounts (Man of Marble, Without Anesthesia, The Orchestra Conductor). This period was completed with Man of Iron (1981), which had profited from Solidarity’s success. The 80s were defined by the trauma of the Marshal Law. Wajda worked mostly in France and West Germany (Danton, Eine Liebe in Deutschland, Les possédés), but in Poland he had decided to use Tadeusz Konwicki’s prose and made A Chronicle of Amorous Accidents.

The breakthrough of 1989 was welcomed with the film Korczak (1990) which was based on an old script written by Agnieszka Holland that had previously been barred from production. It stirred a European debate that ranged from a standing ovation in Cannes to a quarrel over its alleged anti-Semitism in the most important French newspapers. The 90s was a decade of confusion for many directors and Wajda too struggled in the time between The Crowned-Eagle Ring (1992) and Miss Nobody (1996).

But at the end of the decade Poles were returning to the cinemas, millions went back to watching Polish movies. They didn’t want to open old wounds and restart old quarrels but rather to watch blockbusters made from classic school readings. Wajda sensed that need and made Pan Tadeusz: The Last Foray in Lithuania (1999) and The Revenge (2002). Then, with Katyń (2007) we saw a return to the past and to polish martyrology, and after 27 years a Polish movie was finally nominated for an Oscar. This year the Polish candidate will be the film, Afterimage, which as Jakub Majmurek argues, is a timely commentary on the current political situation between those in power and the artists.

Krzysztof Tomasik
Krzysztof Tomasik is a journalist and biographer, LGBT activist, member of the Political Critique. The author of books about the stars of cinema and the history of homosexuality in Poland.
> see other articles <