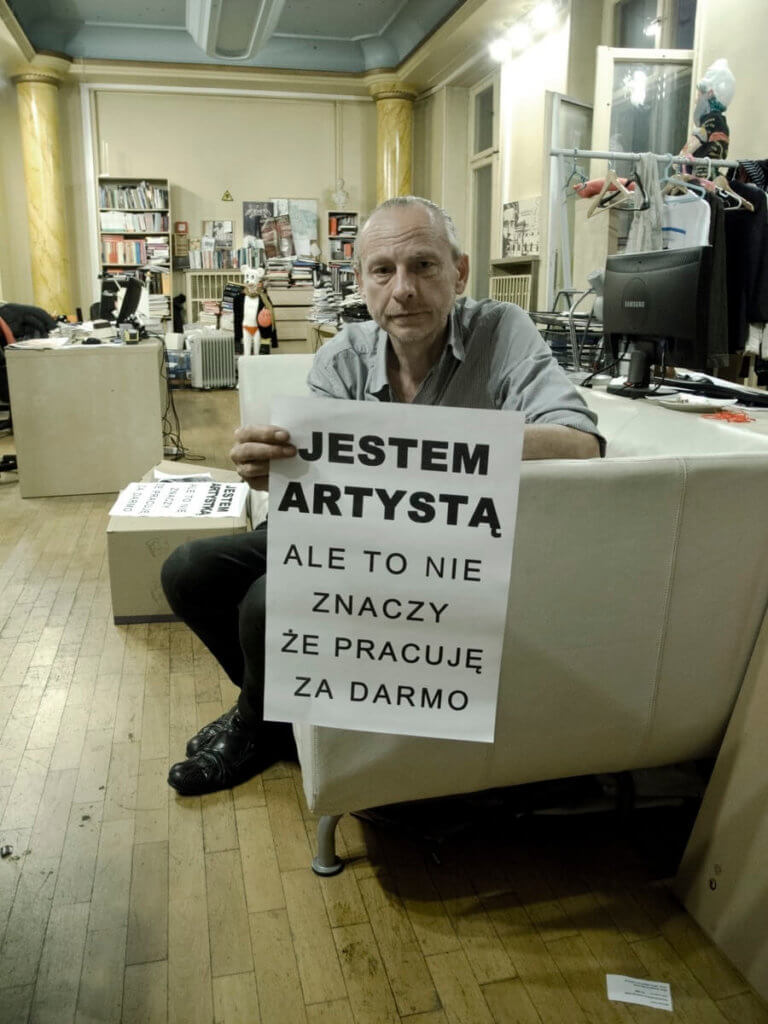 The piece was originally published on artsy.net

In 2012, a number of Warsaw art institutions, including the Museum of Modern Art, closed their doors for a self-proclaimed “art strike,” to promote better working conditions for artists. On Facebook, the event’s organizers posted an image of Polish artist Zbigniew Libera holding up a banner. “I am an artist yet that does not mean I work for free,” it read.

Art strikes like this one continue today. In January, for example, more than 130 art critics and artists, including Cindy Sherman and Richard Serra, signed a petition calling for U.S. museums and galleries to close on President Donald Trump’s Inauguration Day. Looking back, their fears seem justified following Trump’s subsequent proposal to cut funding for the National Endowment for the Arts and his assault on mainstream media. His actions emulate the methods of other “strong man” leaders, including those in eastern and central Europe, who have sought to control cultural institutions as a means of soft censorship against those who might criticize their policies.

In one such context, post-Communist Poland, with its underdeveloped art market leading to a limited economy for artistic profits, tough conditions for artists just got tougher. The country’s nationalist, pro-Catholic Law and Justice party (PiS)—elected in 2015 and known for its conservative social policy and anti-migrant sentiment—has exerted an insidious influence over culture. Appointments to public arts institutions are frequently mired in political scandal, with institutions placed under political pressure to hire favored candidates and show approved work.

The art strike was the first time artists in Poland had done anything like that. There was a huge amount of publicity.

The flipside to this authoritarianism is a recent surge of artist groups fighting back. Alongside Poland’s relatively established artist membership organizations and unions, like Związek Polskich Artystów Plastyków (the Association of Polish Artists and Designers, ZPAP), which was founded in 1911, younger groups have emerged, including Obywatelskie Forum Sztuki Współczesnej (the Civic Forum for Contemporary Art, OFSW), which was established in 2009 and initiated the 2012 art strike. Groups such as this one have grown to include directors of large institutions, including the head of the National Museum in Warsaw, as well as curators, artists, and critics, among their supporters. Mikołaj Iwański, an academic at the Academy of Art in Szczecin and a member of OFSW’s secretariat, explains that that organization was established partly to negotiate for fair payment to artists from galleries for exhibition work.

“The art strike was the first time artists in Poland had done anything like that,” says Iwański. “There was a huge amount of publicity. It was a symbolic act. We could explain to journalists that the situation for artists is really poor, that we’ve not done well, that we are outside the system.” The mission of those striking was to raise awareness that “most cultural producers are poor,” and “remain outside the system of pension and health insurance,” he says.

Though it did not have an immediate effect, the strike paved the way for subsequent discussions. In 2014, a number of institutions, including the Museum of Modern Art, signed an agreement regarding minimum wages for artists, with the fee dependent, for instance, on a solo or group show.

Such strikes, and the associated systemic struggles, have an established precedent. Alain Jouffroy famously wrote about an art strike in his essay “What’s to be done about art?” in the wake of the May 1968 events in France that year, and co-founded the writers’ union, l’Union des écrivains. “The intention is not to end the rule of production,” he wrote, “but to change the most adventurous part of artistic production into the production of revolutionary ideas, forms and techniques.” Meanwhile in New York, the Art Workers’ Coalition, formed in 1969 with members including Carl Andre and Hans Haacke, protested against the Vietnam War, while Gustav Metzger (who died in March), called on artists to stop producing work between 1977 and 1980, taking aim “at the destruction of existing commercial and public marketing and patronage systems.”

The strike did kickstart an ongoing debate about artistic and cultural production in Poland.

Aside from its notable 2014 victory regarding wages, the Civic Forum has been limited by laws regarding strikes, and due to the fact that it is officially unrecognized as a union. But it can still lobby the media and against the abuse of power; push for government grants to include rules regarding artist payment; and argue for artists to be recognized in legislation that benefits the wider workforce. “Years on from the art strike, OFSW is continuing to shape the struggle for changes to economic and social aspects of the Polish art scene,” wrote academic and OFSW collaborator Joanna Figiel in a 2014 essay. “The strike did kickstart an ongoing debate about artistic and cultural production in Poland.”

And it provided momentum. In 2013, a group of artists formed the Commission of Art Workers within the national union Ogólnopolski Związek Zawodowy Inicjatywa Pracownicza (“Workers’ Initiative,” OZZIP), to fight for artists’ labor and social rights. Last year, the group lobbied the Wrocław Contemporary Museum on behalf of employees who feared they might lose their jobs after the institution’s director Dorota Monkiewicz had her contract terminated. OZZIP is the first such group that represents artists working freelance jobs, as well as inside arts institutions in Poland, and supports “the idea of employee self-organization,” says Figiel.

We are waiting for another election. Maybe then we can talk to someone else.

“The two organizations have different agendas, as OFSW is more about art and OZZIP is more about labor, but they are interconnected in many ways,” says Piotr Bujak, an interdisciplinary artist who is affiliated to both. “My contribution has included participating and moderating online discussions, supporting artists by editing letters of support or more direct action and organising, and participating in protests.” He asserts that creatives are in a unique position to “develop new diagnostic tools” to reach broad audiences. “Artist unions can elevate the feeling of discomfort and injustice to an unprecedented level in terms of visual impact,” he adds.

However, organizations such as OFSW face continued opposition, not least in their campaign for the introduction of health insurance and pensions for artists (neighboring Germany offers pensions, health, and nursing case insurance to self-employed artists).

“We negotiated with various ministers for a year and a half, and they started to see there was a problem,” says Iwański. However, since the current Law and Justice government came to power “everything has stopped” with regard to these negotiations. “We are waiting for another election,” he concludes. “Maybe then we can talk to someone else.”

Whether or not they create immediate change, self-organized artistic groups can harness media attention and form bargaining collectives even in difficult political environments. Those concerned about the rollback of state subsidies or increased intervention elsewhere should thus take inspiration.

Rob Sharp
Rob Sharp is a journalist, teacher, copywriter and researcher based in London. He teaches journalism at the London College of Communication and the University of Sussex.
> see other articles <