A primary school in Olsztyn, a city of 200 thousand in north-eastern Poland, has seen ten inspections by the local Education Office. And why? Because of Sam the Snail – the tiny protagonist of a children’s book which turned up in the school library. 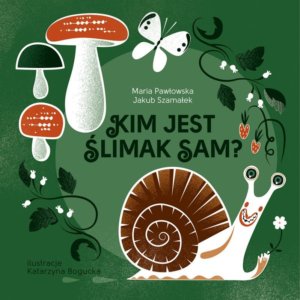 Who is Sam the Snail? tells the story of a snail named Sam who is just starting school. It is the first lesson of the school year, and the teacher is asking children to split into two groups – boys on one side of the classroom, girls on the other. The snail doesn’t know which group to join because, well, it’s a snail. A hermaphrodite. Is it Sam or Samantha? The poor snail cannot tell, so it feels shy and hides inside its shell. Thankfully, the new school hired a smart psychologist, who gives Sam a special assignment. Sam the Snail is to write a report on a storm that passed the area the day before, and to do that Sam needs to meet several creatures of the forest.

The assignment is a bit of a ruse. The psychologist just wants Sam to meet a few neighbors of other species. Sam crawls on to meet Mrs. Marmoset and her two husbands, Ms. Erica Wrasse who is now Mr. Eric, a marriage of two Messrs. Swans, and lady mayor Lucia the Squirrel, who keeps in her office a photo of her wife and daughter. All that, it goes without saying, is literary fiction, but based on the facts of biology.

Apparently, biology can be subversive in Poland. The Education Office has ordered the book removed from the school library as “inappropriate” for young children and for its potential to promote “gender ideology”. Welcome to Poland!

The book, co-authored by a biologist and a writer of video games and crime novels, attempts to demonstrate that animals live in all kinds of relationships and that they themselves are very different. As the second decade of the 21st century grows late, the rather rudimentary knowledge that among black swans, as well as among over 130 other bird species, there are single-sex couples, is enough to cause a major brouhaha in Poland. Not long ago we heard of a pair of male penguins in Sydney Zoo that decided to rear an abandoned egg and became parents. A similar story became the basis for a children’s book – remember And with Tango We Are Three? Perhaps it’s all for the better that those penguins did not find their way to a zoo in Poland? The fact that wrasses, similarly to many other fish species, switch genders at some point in their lives, or that marmosets and tamarins are happily polyandrous, may be a shocking revelation in Poland. And, even more unthinkable, that our humble local critter, the snail, is a hermaphrodite.

The book is now all over Polish newspapers. Evening news in both public (which now simply means: pro-government) and private TV stations ran special segments on the story. Public TV reporters described a highly controversial book, while private media focus on an absurd conflict around biological facts found in a short story for children. A big to-do over a tiny snail.

The book was donated to the Olsztyn school library by parents of some of the pupils. They decided that it was a good read and could help develop an understanding of differences in children. No matter their intentions, the book exploded into a scandal. It is also symbolic of the far-reaching political division in Poland: between a conservative camp, which reads the story as shameless propaganda for LGBT and genderism, and the liberal side, who would like to see children learn about tolerance and openness.

We at Krytyka Polityczna published Who is Sam the Snail? in 2015. The book received a mention in Halina Skrobiszewska national children’s books competition and was inducted into the Hall of Treasures by The Museum of Children’s Books. It was even published in translation in Austria and Taiwan.

We have also produced a video with the staff of Krytyka Polityczna performing snippets of the story.

Every day a dozen or so people visit the office of Krytyka Polityczna asking to buy the scandalous book about a hermaphrodite snail. The first issue sold out; we have ordered more copies printed.

Sam the Snail fell victim to a bizarre hate campaign against anything that falls outside of a traditional model of a heteronormative family. The campaign is not new: we have seen tweets from an educational supervisor from Lesser Poland claiming that “LGBT is an endorsement of pedophilia”, or stern warnings from Education Minister Anna Zalewska against “Rainbow Friday” – events held on the last Friday of October by the Kampania Przeciw Homofobii (Against Homophobia) association, aiming to show LGBTQI youth that school is a safe space for them too.

I know that the Polish government will try to instill ins us a fear of LGBT persons, the way they did with refugees a few years back. I know we will hear a plethora of derogatory and mindless words about diversity. But they won’t defeat the snail. It’s going to be just the way it was born, while penguins and swans will keep on living just the way they want to. And so shall we.

**
Who is Sam the Snail?  was published by Wydawnictwo Krytyki Politycznej.