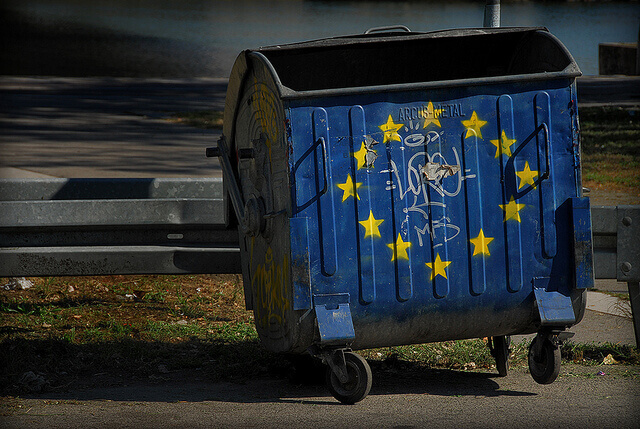 Taking into account the history of the European Union, it comes as no surprise that it has no “official” vision. Even the values or founding myths of this “political entity”, if that is what we should currently call it, are all built around peace. Since peace is taken for granted, easily forgotten, and undervalued by those of us who have never lived through war, it is not sufficient enough to build a future on.

Let’s reflect on what the EU represents for others in the world, a method less Eurocentric, if nothing else. An economic giant, a diplomatic dwarf, and a military non-entity would be the most probable outcome of such an endeavor. Yet if the EU wants to be a global player (in a way that Germany, Britain, or France on their own cannot be) competing with countries such as China and the US, it cannot do so without a vision for the future – not only on a European, but on a global level.

Let’s reflect on what the EU represents for others in the world. An economic giant, a diplomatic dwarf, and a military non-entity would be the most probable outcome of such an endeavor.

There is a problem – and it is not the problem of how to actually accomplish this with nationalist, short-sighted local politicians and an uninterested public. Rather, the sheer magnitude of creating a vision for the EU prevents addressing all of its aspects at once. The problem is precisely  the lack of vision, values, founding myths or whatever they ought to be called. European citizens may well ask: “Why is there an EU?” If good enough, the answer will not only make those short-sighted local politicians irrelevant, but more importantly, it will make Portuguese soldiers understand why it is worth their time to protect the Polish-Russian border. This unclear vision is actually one of the most powerful tools for achieving lasting peace.

So, what is the answer of why we have an EU? Today it is peace and prosperity. But peace is a hard sell to a population that has known nothing other than peace for decades. And prosperity? Free market theory? Even without the consideration of the current global economic crisis, is it not too little? As a vision, “prosperity” brings the same problems as “peace”: do we not have it already and can we imagine anything else? Are the current economic crisis and the fall of the middle classes in European countries actually proving the point that what we have is not enough?

European countries do not lack the resources to provide adequate public services like education, health and housing to every person, unlike many other regions of the world. While we would like to provide for all members of our society, we do not do it. Why? Quite simply: we lack a vision and the values on which to build the foundation for such solidarity.

Is the idea of guaranteed standards of living, high quality public educational facilities for your children, and free medical care for your parents and grandparents worth building a real European Union on?

Human rights might be the answer. Fulfilling human rights for every person could very well be the vision for a united Europe. Please note: this should not mean only the so-called “first generation” of human rights such as freedom of speech and assembly, which once again we have and take for granted in Europe. The emphasis needs to be on economic, social, and cultural rights. On the right to an adequate level of medical care regardless of your income. On the right to clean water and sanitation, no matter if the government decides to privatize plants or piping networks. Dignity is the actual precondition to consummating all those other rights, which we tend to take for granted, but somehow, deep down, we understand that they are only for those who can afford them. Is the idea of guaranteed standards of living, high quality public educational facilities for your children, and free medical care for your parents and grandparents worth building a real European Union on?

We have the means and the tools to make it happen. We have even more: we have the possibility to support human rights globally. They are, after all, universal. But such a vision comes at a cost. We may need to take active steps in getting rid of tax havens. We need to take into account some temporary economic repercussions as a result of diplomatic and economic clashes with oppressive regimes. Some toothless sanctions will not suffice. This is when the guaranteed standard of living in the EU achieved through high quality public services should come in handy for those sacked because some international business contract went bust.

This is one possibility – food for thought if you like. It’s designed to provoke discussion and by definition some disagreement. The main threat to our future is the lack of discussion about a vision and a resulting lack of a vision itself. Our political elites are short-sighted and still think in terms of boundaries of national states that do not, de facto, exist anymore, not thanks to the Schengen treaty, but thanks to global neoliberal capitalism. The problem is the lack of any decision rather than wrong decisions. We may go wrong, but we should at least try to get it right. If we do not decide and do not act, although we have the means, it will be decided for us, and enacted by others without a chance for us to influence the outcome. This, as history teaches us, will inevitably go wrong.