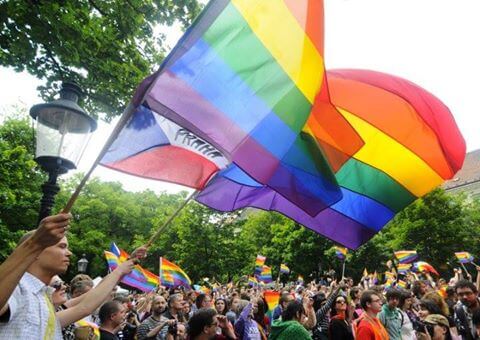 The Pride marches for LGBT rights started to write their history in Slovakia in 2010 when the first ever parade through the streets of Bratislava took place. It was an important symbolic action that outdid all of the vested expectations. Back then, no one could imagine it happening: it was argued it could have occured anywhere else but that Slovak society was “not ready” for LGBT rights yet. “It’s too dangerous,” they said.“It’s not the right time yet; this will blow the society into pieces,” they said. And yet it was a huge success. Not only were LGBT people depicted positively in the media; they entered the political scene, and were able to establish themselves as an existing minority with their pressing needs for recognition of equality and for protection. An unspoken number of individual fates have been changed since – the Pride march encouraged a number of coming outs, gave birth to plenty of empowerement structures and became a counterpoint to the prevailing homophobia.

“It’s too dangerous,” they said.“It’s not the right time yet; this will blow society into pieces.” And yet it was a huge success.

It took three years for the counterforces to mobilise themselves – and they have hit back hard. Under the umbrella of the so-called “Alliance for family”, a civic association, which is heavily sponsored and promoted by the Catholic church, the conservatives started taking every opportunity to denounce LGBT people in the same sentence as denouncing gender equality, culminating in a referendum against LGBT rights in February 2015. The referendum was preceded with a ruthless campaign which included bilboards and videos openly suggesting that LGBT people steal and sexually abuse children.

Despite the best efforts to polarize and emotionally mobilize society for the purported “defense of the natural family” and exorbitant sums of money used for this purpose, a mere 21% of the electorate cast a ballot; the issue of the private life of LGBT people apparently was not the most important stress factor in peoples’ everyday life. On the other hand, the position of fringe fundamentalist conservative fractions of the Catholic church, such as the previously mentioned “Alliance for family”, were firmly established, and they now present themselves as a legitimate voice pretending to be backed by all Catholics.

The Catholic church was not the only group to rally against LGBT rights and thus plunge  the country into an unnecessary cultural war. In a historically tested tradition, the neonazis and all sorts of local proto-fascists joined the catholic fundamentalists and found a common ground in complete and utter disapproval of both LGBT and womens rights. Right-wing and extremist websites and “alternative” media  accross the country were united in claiming this  is an “imported western ideology” which we should be courageously  standing against. As of March this year, the neonazi party Kotleba – LSNS (People’s Party Our Slovakia) entered the Parliament with a frightening 8.4% of the vote.

This is a very good moment to show that intolerance, homophobia, misogyny, chauvinism and hate against muslims is not a new norm, it is not a majority voice and  they can’t usurp the public discourse.

Although the anti-LGBT rhetoric was not the key to their electoral success – that was mainly due to their anti-establishment stance and clean-slate status –politically speaking, it is not a good message for LGBT rights. Therefore this is a very good moment to show that intolerance, homophobia, misogyny, chauvinism and hate against muslims is not a new norm, it is not a majority voice and   they can’t usurp the public discourse.

You are all invited to join the celebration on 30th July.