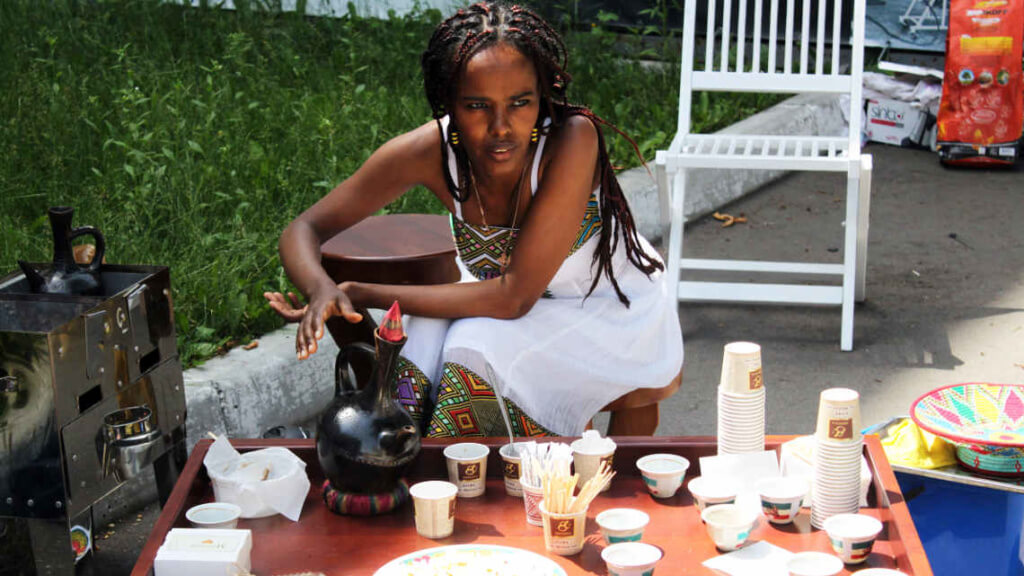 As a result of conflicts in the Middle East, 2015 and 2016 were characterized by heightened attention paid to refugees on the part of both Ukrainian and European media. The situation in Ukraine was also aggravated by the number of internally displaced people who left the territories currently not controlled by Ukraine, namely Crimea and some areas in the East of the country. However, despite this media attention, the problems faced by internally displaced people and refugees have not always been adequately covered in Ukrainian media. This became clear during the protests in Yahotyn.[1] In order to raise public awareness about the problems of these people who were forced to leave their homes, an International Refugee Day festival was organized on 20 March in the art gallery, Art Arsenal.

Nataliia Lomonosova and Sergey Movchan spoke to refugees and representatives of NGOs that protect the rights of refugees, to find out more about the problems they face, which are often ignored by society and the media. 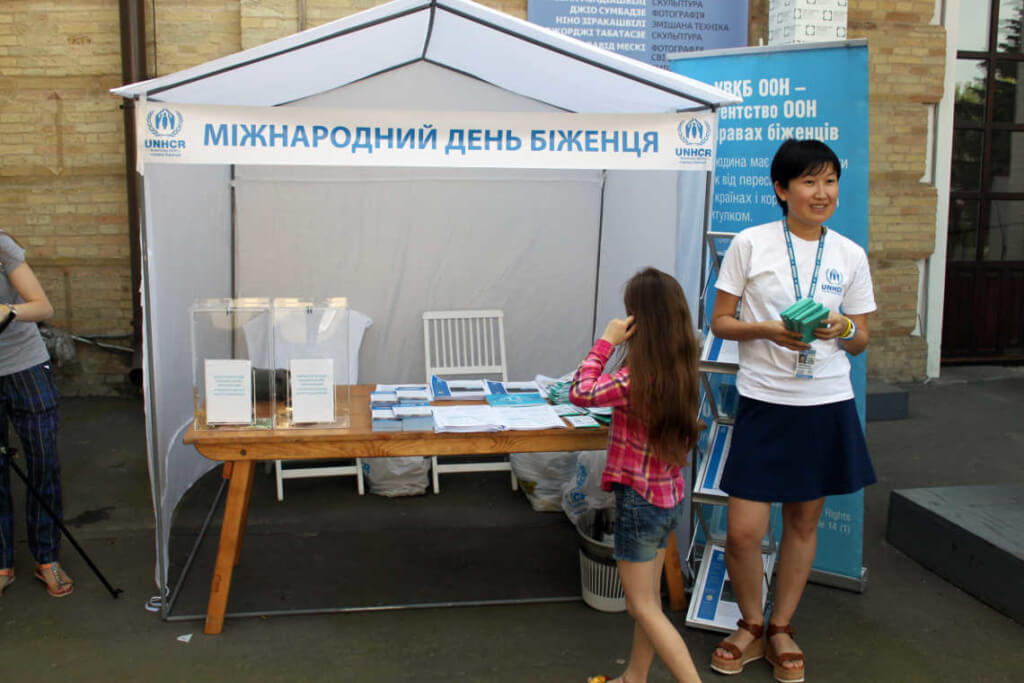 I do not have a Ukrainian passport. I only have a spravka.[2] And without a passport, I cannot do anything here. I really need it. It is very difficult for me to receive a passport. I applied quite a long time ago, but still have not received it. I have been waiting for two and a half years already. So far, I live in Kyiv, in Troyeshchyna.[3]

If I had the papers, I could study at university, find a job, I could change my life.

I have lived here for twenty years. I came in 1995 from Sudan. I have a family here. My wife is Moldavian, and we have three kids, all of them citizens of Ukraine. But I still do not have the papers. If I get stopped by the police now, and they check my papers, I will go to jail. I have no papers at all. And I do not know what can be changed here. Of course, people adapt. People come, they think that it is possible to get papers, but here it is…  I know a man who has lived in Ukraine for fifteen years without papers, although his two sons have already been conscripted to serve in the Ukrainian army.

Every year they promise us that the system will change, but nothing changes. Nothing has changed in twenty years. My son, he has all the documents, he is a citizen of Ukraine, but I have none. I cannot work. I cannot do anything, nothing. And if you create this kind of situation for refugees, they will not sit around, they will move.

Nothing has changed in the last two years either. I have not seen anything, I do not feel anything. Everything is as it was before. I have a court decision; they won’t give it [citizenship]. The president’s administration, the court, a great lot of paper. But there is corruption everywhere. They all defend each other. The court decision in 2004 did not give it to me, and in 2012 they did not give it to me either. 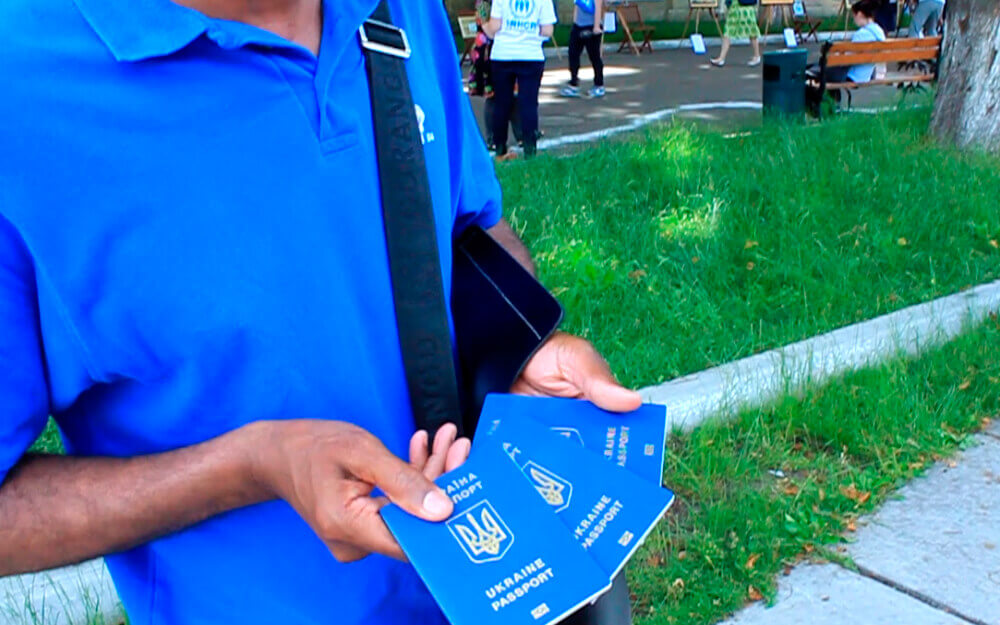 I also cannot get housing. I submitted an application, and they told me to wait. But we have not received anything. I currently rent a place in Bila Tserkva. But we have to move all the time. Before that, we lived in Odessa, in a temporary accommodation centre for refugees, for thirteen years. All of my children were born there.

I do not demand anything from the government. No help, nothing. I can do everything myself. It is only crucial that I get the papers. To have freedom.

And if you do not want to give me papers, well, alright. Then help me to move to another country.

And what will happen next? I will take my children and leave this place. I do not know where I would go. Any place, just to let the kids study properly. I am already thinking about it.

I believe that it is very important for the Ukrainian government to help both the internally displaced, from the East and Crimea, and the refugees to make a fresh start. I know that people complain that they cannot find jobs. For example, these women next to us have hairdressing skills, but they do not have work permits. It forces them to rely on someone else’s help all the time. However, they want to become independent. 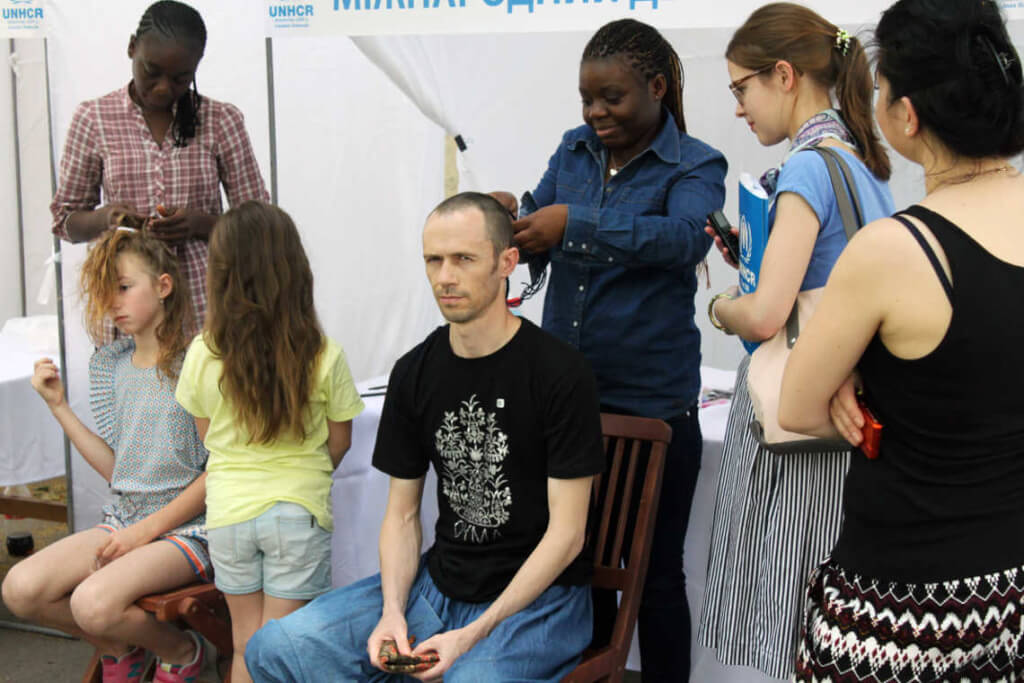 I think that there is much that we could do for them. I am from Japan, and I know that many international companies have recently opened their branches in Ukraine, including Japanese companies. Perhaps it would be a solution to make it mandatory for these foreign companies to hire a certain percentage of refugees and internally displaced people if they want to open a branch in this country. Of course, the biggest problem is that people were forced to leave their homelands. However, if the dangerous situation that forced them to leave remains unresolved, the government should provide them with decent living conditions, so that they can start new lives in a new country. Of course, this entails not only employment, but also housing provision, and, in the case of internally displaced people, helping them receive their retirement benefits and other welfare payments, which, I know, involves difficulties at this point.

Refugees existed in Ukraine even before the conflict in the East started, and they are still here. After the conflict in Ukraine which resulted in the internal displacement of many people, international organizations came to Ukraine to help them. However, refugees were “abandoned” to some extent, even though they are also in a difficult situation. Both the internally displaced people and the refugees need help because they have lost their homes.

Olena Vynogradova, a legal expert at the All-Ukrainian Charity Foundation “The Right to Protection”

The biggest problem faced by the internally displaced is the registration required for them to receive social benefits. People inquire about issues such as employment, registration as children’s guardians, and the registration of births and deaths that happened in the uncontrolled territories. We often see refugees from other countries asking for help in obtaining refugee status in Ukraine. But even once a person has received this status, or even while they are in the process of receiving it, they still have a lot of questions about socio-economic problems, which are mostly dealt with by other organizations.

Daryna Tolkatch, advocacy coordinator of the All-Ukrainian Charity Foundation “The Right to Protection”

A high percentage of applications for refugee status in Ukraine are rejected. Out of approximately 1,500-2,000 applications per year, only 200 might be approved. We provide legal help. Refugees find themselves having to deal with a government that does not uphold their rights. The procedures leading to receiving refugee status are problematic and lengthy. We have clients for whom the process has taken 18-20 years. When applicants go to the migration authorities they often cannot communicate with them. According to the law they must be provided with an interpreter, but it never happens. At best, they may speak English, but often not at an advanced level. The process of interviews in order to receive refugee status is problematic for people in this situation.

As for accommodation in Ukraine today, the means of providing accommodation to asylum seekers and refugees is extremely limited. In fact, accommodation can be provided only to those in the most vulnerable categories; women with children or unaccompanied children. There are very few places that can accommodate refugees. The situation in Yahotyn, regarding the construction of a refugee shelter, is well known. This shelter was supposed to increase the number of accommodation units, but as a result of opposition, it did not happen. As of today, if I am not mistaken, our country can accommodate as little as 300 people.

Furthermore, regardless of the situation in Europe, the flow of refugees into Ukraine has not increased. It remains stable, at approximately 1,500-2,000 applications per year. However, it should be noted that the nationalities of people who apply for refugee status has recently changed.

Where, before, asylum seekers were mostly from Afghanistan, Somalia, and Iran, they are now outnumbered by asylum seekers from Russia and Belarus. There is nothing like the Syrian invasion that is sometimes mentioned in the media. In fact, Syrian refugees fall into a completely different category; they consist, mostly, of those Syrian citizens who lived in Ukraine before the conflict started, and now cannot return to their country. They often have other reasons, such as family, for staying here.

[1]In March 2016, residents of Yahotyn, a town in Kyiv region, protested against the opening of a shelter for refugees in their town. — Transl.

[2] Spravka (Rus. справка) is a generic word for a reference note issued by any government agency; it is often used as a symbol of red tape. — Transl.

[3] Troyeshchyna is a residential neighborhood on the northeastern outskirts of Kyiv, often treated as a symbol of the “wild nineties,” poverty and petty crime, although by now it has already become a regular, respectable neighbourhood. — Transl.