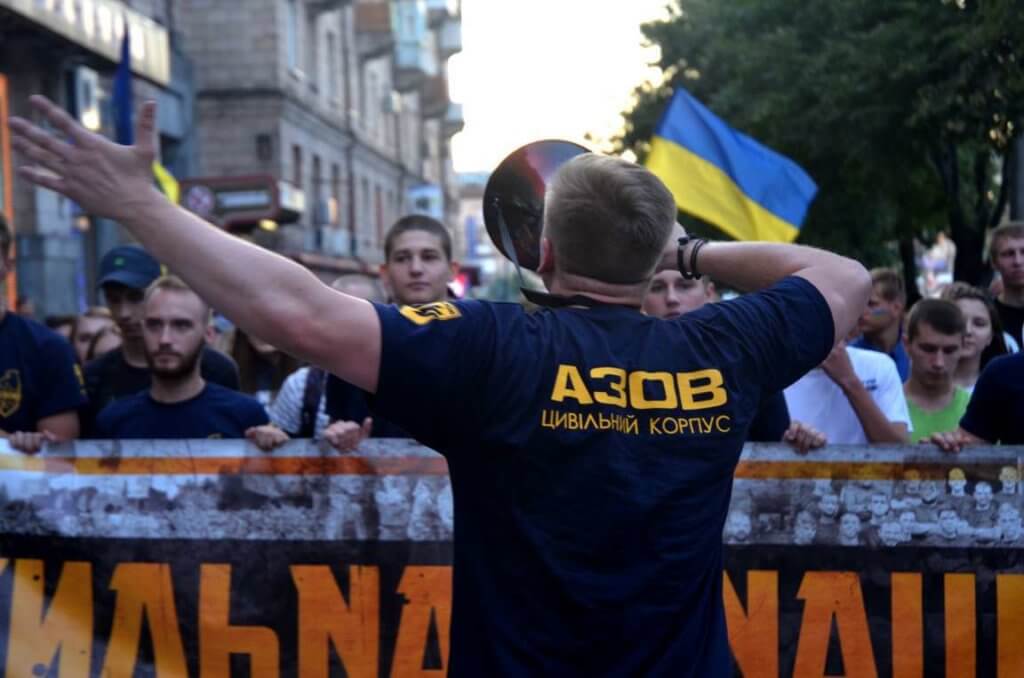 This autumn, a new far-right political party will appear in Ukraine. The Civic Corps of Andriy Biletsky’s Azov regiment announced that the party’s constituent congress will be held on October 14, which is an important date for Ukrainian nationalists; on this day they celebrate UPA, Ukrainian Insurgent Army active in 1940s. Azov party can become a new player in Ukrainian parliamentary politics, possessing a wide base of mobilized and ideologically motivated supporters.

Azov Civic Corps was organized as a political wing of the far right battalion-cum-regiment. Officially they are not related directly to each other, but the Civic Corps leadership and, partly, its member base is comprised of former Azov combatants. Subordination to Biletsky is also an inviolable rule there. According to Ukrainian laws, this NGO can be considered an illegal armed group. But due to the current political conjuncture and the strong patronage which this structure enjoys, it will be transformed into a legal political party rather than banned.

Andrii Biletsky denies the existence of ties between his new party and the interior minister Arsen Avakov. Nevertheless, Avakov can be called patron of Azov regiment and of Biletsky personally. Both of them come from Kharkiv. During the very beginning of the armed conflict in Eastern Ukraine Avakov was the curator of newly organized volunteer battalions, including Azov.

Biletsky also denies that Roman Zvarych, US-born former minister of justice of Ukraine, plays a role in the new party project. Zvarych was the chief manager of Azov Civic Corps. He was supposed to be the interlocutor between the Ukrainian far-right and their foreign sponsors.

Also, Biletsky himself explains that he can’t be a public politician before leaving the service in Ukraine’s National Guard. Anyhow, there is no doubt that he will be the unofficial party leader.

Azov and affiliated combatants were often suspected in financially motivated criminal acts. Even its barracks and training grounds in Kyiv are located on the premises of Atek factory, which has earlier been seized by armed people. Atek’s CEO accused Zvarych of organizing the raid. Anyhow, today the factory is controlled by Azov servicemen.

Another noteworthy case in this context is the armed robbery of bank collector car in Zaporizhya region this summer. Four persons connected with Azov regiment were arrested, two of them foreigners, one was killed during the police detention operation. The latter was a neo-Nazi with Latvian citizenship who had ties to the Russian far right in the past.

There was yet another telling case in Zaporizhya region. Azov Civic Corps members took part in a rally against the “illegal wall” that blocks the way to a beach in Berdyansk.

Protesters put up a fight with construction workers and tore down the wall. Local community activists say there is another way to the same beach, ten meters away from the contested place; they claim locals did not ask for such a support. The event was attended by Andriy Zhadan, the director of a resort located across the road. He is a local businessman connected with the Party of Regions and accused of criminal fraud in real estate sphere as well as illegal drug trade.

What was the motivation for the far right to act in the interests of a criminal from the team of the ex-president Yanukovych?

Whatever the possible financial gains from such kinds of activity, these isolated cases can hardly provide adequate funds for the long term-oriented party work. Biletsky denies that big financial industrial groups play any role in the process of party building. Most likely, initially the party will not be associated with any particular clan but will later try to offer some informal services in exchange for funding. It is not clear yet but will be soon. Azov members are notorious for participating in racket schemes – and there are no reasons for them to abstain from using the same style of work in politics.

During the parliamentary elections of 2014 Andriy Biletsky hasn’t put forward any program beyond the short slogan: “Strong nation! Honest government! Mighty state!”. It means that he expected (and eventually received) public support posing as a charismatic war hero who doesn’t talk much but does a lot. And of course his advisors, connected to Arseniy Yatsenyuk’s Popular Front, chose for him a voting district where his main competitor was a member of the Party of Regions. Thus, the ultranationalist Biletsky harvested votes of all those unsympathetic to the former members of Viktor Yanukovych’s team, not only those of the far-right.

Now Biletsky has announced a long political party program which will address not only ideological issues but also those of economy, military, culture, science etc.

It seems that this program will look like the concept of Ukrainian “integral nationalism” developed in the 1930s by Dmytro Dontsov, only adapted to the taste of today’s average voter. It means building strong authoritarian Ukrainian state which should become a regional geopolitical leader. In economic sphere it means corporatism and protectionism; in culture, conservatism. It’s clear that this program will be distilled of all outright ethnicist or anti-democratic rhetoric and formally will adhere to liberal conventions.

But this doesn’t mean much, because Ukrainian voters rarely read party programs, being more interested in “speaking heads” or populist mottos. This is the chance Azov will try to use. That’s why the Civic Corps members try to participate in all social or civic movements and protests, e.g. protests against illegal construction sites or trade union rallies. They also incited anti-Roma pogrom in Odesa region after a child was raped and murdered by an alleged Roma. Mainstream media and politicians readily retranslated the xenophobic messages. This kind of activity can also be a good way of getting support for the new far-right party.

Another possibility of gaining political influence lies in cooperation with Avakov. He used the trump card of Azov’s personal loyalty to him while building his own political line.

A political party with a strong paramilitary wing can also be used for the same ends.

So far, not a single far-right party managed to reach long-term success after focusing on electoral politics in modern Ukraine. Svoboda is a good example of losing public support and membership after its sensationally good results in the 2012 elections. But now there is a vacant niche of a strong and charismatic force able to attract ultra nationalists and supporters of a “strong hand”. The new Azov party has all the chances to become one.

Whether they will succeed in this or not, the party will still be used as an argument in behind-the-scenes Realpolitik – by Avakov or someone else. It will still be used for protecting interests of “patriotic” business structures by means of physical force. And it will be used to exert pressure at political opponents. Not a single political party in Ukraine now has such a wide base of activists, motivated not only financially but also ideologically.

The article was originally published in English on Reft & Light and in Ukrainian on Політична критика.

Reft & Light is an independent Ukraine-based analytical project, monitoring authoritarian left-right alliances and the Ukrainian far right, launched under the auspices of Euromaidan Press. Opinions expressed in articles on this site are the authors’ own and do not necessarily reflect the views of the Reft & Light editorial board or Euromaidan Press.

Iryna Yavir
Due to safety considerations, the author wishes to remain anonymous.
> see other articles <