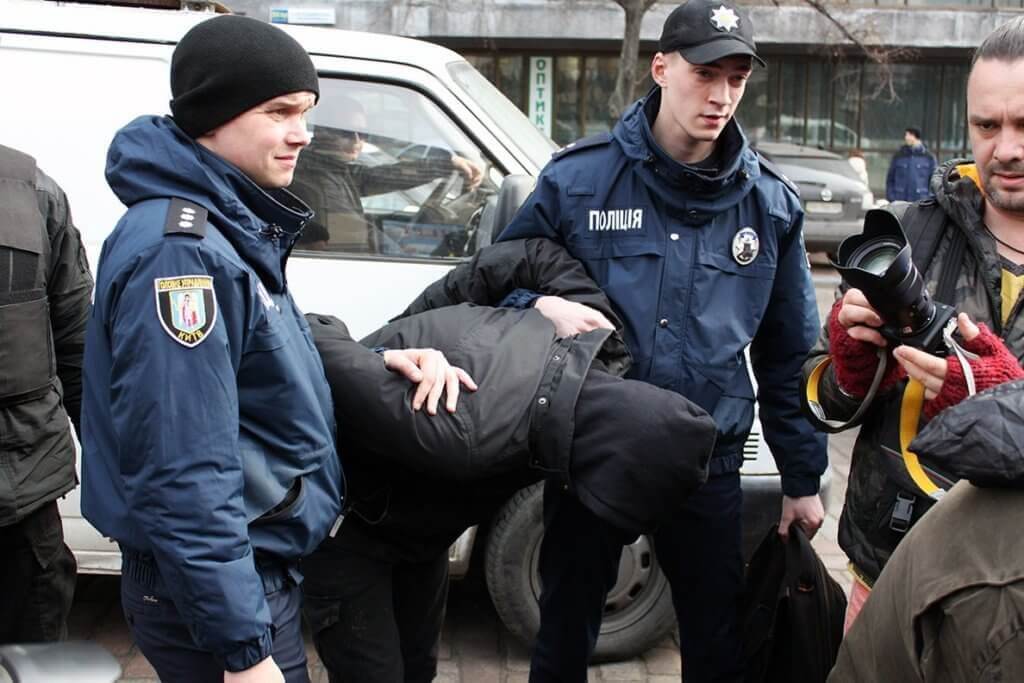 On 20 April, activist Stas Serhijenko was brutally attacked and stabbed near his home in Kiev. He suffered serious wounds and was taken to hospital. This incident was only one of a series of violent attacks on left-wing activists and institutions. But as Aliona Liasheva explains, it is not only those associated with the left who have become the victims of attacks, anyone who is seen as challenging mainstream pro-Ukrainian and pro-war views can easily become subject to repressions of different sorts.

VP: On April 20, activist Stas Serhienko was stabbed near his home in Kyiv. Who was behind the attack?

AL: It is difficult to be completely sure. The police only started working on the case three days after the attack. But we can make some basic assumptions. For one, Stas was not robbed. The people who attacked him filmed the incident. Stas had received a lot of threats before. It makes sense to assume this was an attack from a far-right group. The leader of one such group called C14, which has been active since the 2010s, published a blog post in one of the mainstream Ukrainian media, in which he approved of the attack. It’s quite likely the attackers were associated with this or a similar group, but Stas didn’t recognize any of them.

TR: Has Stas suffered attacks before?

AL: Yes, he was beaten after the 1 May demonstration in 2016, and he identified the attackers as members of Azov. He was also threatened at another anti-fascist demonstration last year, so this attack was not unprecedented. But the latest incident was certainly one of the most horrible we’ve seen for a long time in Kyiv.

VP: Several other violent incidents have also occurred in the past weeks and months. Recently, an exhibition of artist Davyd Chychkan at the Visual Culture Research Centre was vandalized. In February, activist Taras Bohay was attacked in Lviv. Are these attacks connected in any way? Are the same people behind them?

It’s hard to say for sure whether these incidents are connected, but it’s clear that part of the far right are going wild right now. These are people who did not make it either into mainstream politics or other state structures, such as the police. They are not controlled by any institution and I can only hope the attacks are not systematically organized. The difficulty in assessing the situation is also a result of these attacks often being “covered” by the police.

VP: So what is the role of the police? Are they making any efforts to investigate?

The rather half-hearted investigations into these crimes could be explained by the fact that the police are completely disorganized, or that they do actually have an interest in covering up these incidents. There have been cases when they simply stopped the investigation. What’s important to highlight is that attacks on activists like Stas are a small part of a bigger process. For instance, media are being attacked. Take the case of Inter, a TV channel, which was accused of being pro-Russian in September 2016. It was not attacked by the state, but by a group of thugs who set the station building on fire.

TR: There are signs that far-right groups and other actors, such as oligarch groups or elements of law enforcement, link up at points where they can be of mutual benefit. How do you see these interests aligning?

During the Maidan, these groups were instrumentalized by the elites, part of them are now in the volunteer battalions of the army.

AL: I completely agree that there are a whole host of different groups and interests involved. The situation certainly changed after Maidan. In the past three years, we have witnessed an increase in far-right violence, though of course it’s not something completely new. These far-right groups existed already before Maidan and were also financed by oligarchs in certain cases. They were also very much associated with the Dynamo Kyiv football team. During the Maidan, these groups were instrumentalized by the elites, part of them are now in the volunteer battalions of the army. Others, especially leading figures, received positions in the police and secret police institutions. The head of the police has far-right connections. Those who were beating LGBT people on the streets are now sitting in offices. And those who didn’t get a position in the army or security services are now out and about and ready to spark violence at any point.

VP: Who or what exactly are the targets of far-right attacks?

AL: Attacks on media and activists are just a small part of what’s going on, because in general there’s a broad nationalist consensus in the country. Its main criteria are being anti-Russian and pro-war. By anti-Russian, I don’t just mean being critical towards Putin’s politics, but rather a general Russophobic attitude, which hates everything connected to Russia, including its language, though one half of Ukrainians speak Russian as their mother tongue. This consensus also dictates that if you want to be part of the nation, you have to be militaristic, support the army and far-right battalions no matter what sort of war crimes they are committing. The moment you break this consensus in public, you pay for it.

VP: Does this mean that those who break this consensus are automatically defined as being on the left?

AL: No. Usually they are labelled as being pro-Russian or pro-Soviet. Of course, some of those who criticize this consensus do so from leftist positions, like researchers, journalists, or activists. But there are also some nationalist journalists doing the same. Take the case of Ruslan Kotsaba, whose views are far away from the left – for example, he is openly anti-Semitic. He published a video blog in which he said he didn’t want to be drafted into the army, because the Ukrainian army is defending the interests of oligarchs. He was arrested for that, sentenced to three years in prison and later released. It also affects people who have pro-Russian views. This was the case of Oles’ Buzina, the journalist who was shot dead in 2015. It is still not clear who did it, but there are reasons to believe that right-wing groups were involved. Or take the radio station Vesti. It published a range of different opinions, from pro-Ukrainian pieces to positions slightly sympathetic to the current direction of Russian politics. They lost their broadcast license in March this year.

TR: The different elements of the attacks against particular people or institutions connected to Russia are part of the “hybrid war” discourse, where everything is securitized and everyone is seen as a potential threat. It doesn’t matter if you say something against the consensus in public or are engaged in activism outside permitted frames, if you are a platform hosting someone with views outside the mainstream — potentially, this can be perceived as a threat to national unity and sovereignty, a source of defeat or treachery. Nowadays, it feels like everyone is an amateur detective.

Absolutely. If you want to find something to compromise someone, you will. And this also affects people who are not directly involved in politics. Take the example of the music band ONUKA. The leader of the band has mild patriotic political opinions. One of their tracks was sold to a Russian filmmaking company. Because of that, the band was accused of being separatist by another artist and this accusation was quickly spread around social networks. It’s an example of how these repressions have no logic.

VP: Which makes everyone into a target, because anyone can be labelled as disrupting the national(ist) consensus.

Exactly. For example, Stas is a very obvious target for the far right. He has left-wing views and doesn’t hide it, he supports LGBT and minority rights. He doesn’t fit into this consensus at all, yet there are also people very close to this consensus, like this musician, who has nothing to do with politics, but whom these repressive processes affect nevertheless. This doesn’t concern just explicit attacks of the right, but also the state policy of decommunization. The recent decommunization laws are very contradictory. Street names have been changed, but also books, activities and organizations have been banned. Basically, the definitions are so broad, that if you really want to, you will find a reason to put anyone in prison. As Tom said, everyone is a detective.

TR: A classic instance of this took place in May last year, when a group of hackers released the personal information of roughly 7,000 people who work in the media and more or less accused them of state treason. Ukraine’s liberal commentariat was generally in favour.

Many felt the need to discuss Stas’s political beliefs and evaluate if they are good or bad.

AL: And indeed, the debate that was sparked on the internet after the attack on Stas shows that people really believe that being a communist is reason enough to be stabbed. For example, on the informal social network page of his university, people were literally saying with a lot of sarcasm that this is what he deserves as a “commie”. Disgusting, really. Many felt the need to discuss Stas’s political beliefs and evaluate if they are good or bad. And if they’re bad… Well, then the attack was basically justified in their view. But of course, many people also reacted from a human rights perspective and condemned this act of violence, even if they themselves do not support left-wing views.

VP: What is the mood among activists in Ukraine at the moment? What kind of impact are these attacks having?

AL: As I said, it’s hardly all that new. We have been aware of the ongoing violence and the danger it poses for a long time. In general, left-wing activists understand the fact that any article they publish in a journal might be a reason for being attacked. Many activists have internalized a code of security rules, like hiding their real names, the place they live, extra internet security, being very careful at demonstrations. At every rally, there’s a plan of how to get to where the event is taking place and how to leave. It’s become an everyday practice, you don’t really notice it anymore. But I won’t hide that I am scared.

TR: What about the media? How have they reported on the incident?

The media also completely support the consensus we’re talking about. Although some media did share a statement written after the attack, there is not a lot of interest in covering this in Ukraine. We were, however, contacted by Russia’s Channel One. Of course, we refused to talk to them. Surprisingly, Stas’s university was actually very supportive, also in terms of media coverage.

Aliona Liasheva is editor of the journals Commons and September, as well as the book “Left Europe” about social movements in the European Union. She is a a PhD candidate in urban studies at the University of Milan-Bicocca.