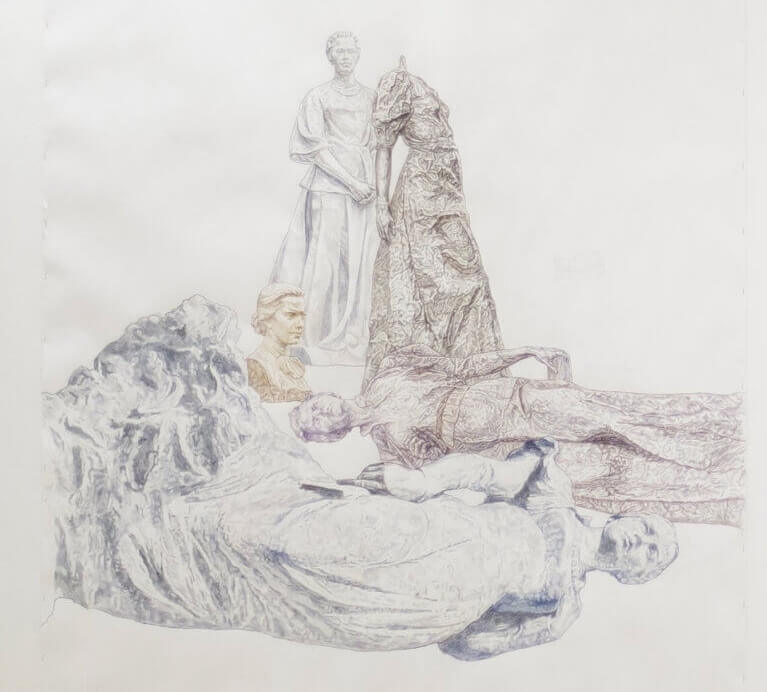 On Sunday, the 12th of February, «The Lost Opportunity» exhibition by Davyd Chychkan was reopened. The exhibition space, preserved as it was after the pogrom, serves as a ground for reflection on the current situation in which artistic expression now is, as well as of our society in general.

The works by Davyd Chychkan are artistic images that found themselves strong in their weakness in front of the pogromists with covered faces. The interpretation of these images requires a complex assessment, a nuanced commentary, a thoughtful critique, and aesthetic sensibility. The reopened exhibition points to its return to the territory of intellectual interaction and reflection, from which it was ousted by an act of barbaric violence. It is thus the only way to discover its real political meaning.

Remaining on the positions of open-mindedness and enlightenment, freedom of speech and autonomy of artistic work, we suggest to look critically at the social landscape of post-Maidan and the opportunity of not losing the guidelines that were defined during Maidan. The savagery of the pogrom implies the essence of «anti-Maidan»: a social darkness that cannot be allowed to occupy the Ukrainian public space.

The exhibition was reopened with a lecture by Ukrainian lawyer and human rights advocate Kseniya Prokonova. Addressing artists, cultural institutions and human rights activists, the lecture considered potential legal actions in cases of attacks and destruction of artworks.

Kseniya Prokonova is a lawyer, Head of the Dispute Management Practice.

Focusing on war and the post-Maidan situation in Ukraine, «The Lost Opportunity» exhibition by Davyd Chichkan opened on Thursday, the 2nd of February. It poses the questions that have been in the air for more than three years: what was this event, and what could it  have become? According to the author, Maidan is a lost opportunity for the Ukrainian society to accomplish a social revolution, which would mean not only to defend dignity, but rather finally gain dignified living conditions. In his series of graphic works, the artist discovers the causes and speaks about the consequences of this loss, one of which is the so-called “decommunisation” – a paradoxical phenomenon which shapes the traits of counterrevolution in the context of political ignorance.

We remind you that on Tuesday, February 7, at 17:40, 14 people broke into Visual Culture Research Center, inflicted injuries on the security guard, destroyed the exhibition «The Lost Opportunity» by Davyd Chychkan, and stole four pieces of artwork.