[dropcap]O[/dropcap]n Saturday (23.03) around 80 people protested in Berlin, in front of the Gate of Brandenburg, against the election of the Brazilian Deputy Marco Feliciano – accused to be racist and homophobic – as head of the Committee on Human Rights and Minorities (CDHM).

On 07.03, Brazil’s House of Representatives elected the evangelical pastor and congressman to chair the mentioned house (CDHM). Since then protests in many cities in Brazil and around the World have been organized, mainly by brazilians who are living abroad and want to pronounce their disagreement with this election. São Paulo and many cities in Brazil, Buenos Aires, London, Amsterdam, Lisbon, Paris and Berlin had protests since the election happened.

Feliciano had made anty-gays pronunciations, saying that ‘AIDS is a gay cancer’, and that LGBT (Lesbian, Gay, Bisexual, and Transgender community in Brazil) advocates a ‘gay dictatorship’. For two years, he also made racist statements on his twitter: “Africans descend from an ancestor cursed by Noah; (…) that’s why it suffers from ‘hunger, diseases and ethnic wars”.

Feliciano’s Social Christian Party – PSC Brazil, is a right wing party. On Tuesday (26.03) an answer about his permanence as head of the Human Rights Committee and Minorities in Brazil will be given. 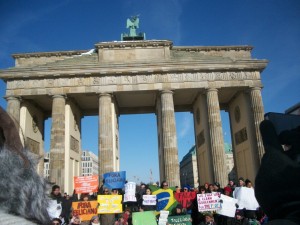