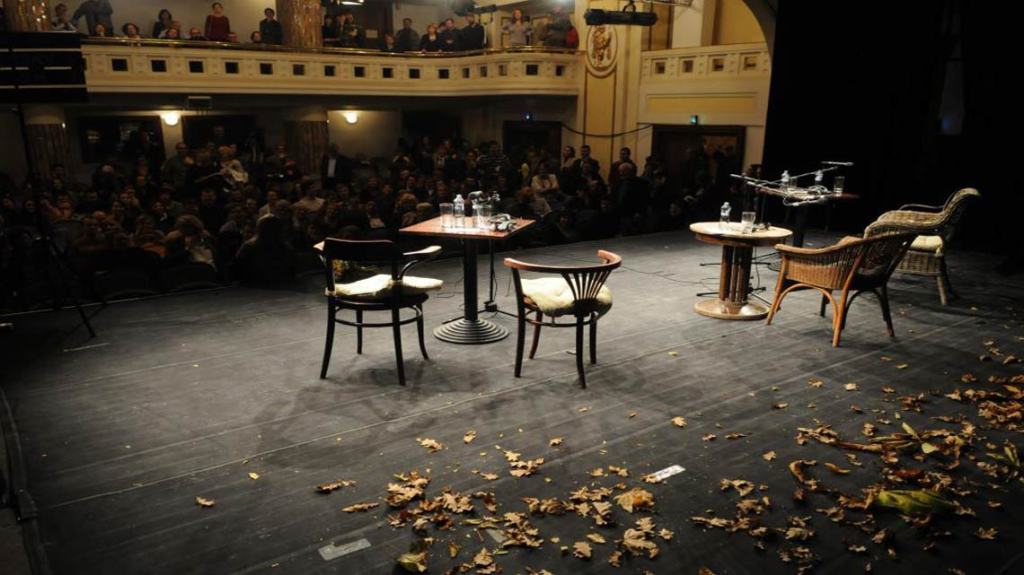 Friday 14th will see the start of this year’s Stredoeurópske fórum / Central European Forum, from which Time to Talk will be streaming all of the main programme debates.

This year’s Forum, featuring several debates and a wide array of satellite events, is entitled Us and Them and, amongst looking back at 25 years of post-communism, will seek to understand the divisions that presently separate Europeans, both within and without countries.

To tune into these debates and to learn more about those taking place on Sunday and Monday, go straight to the page, hosting tomorrow’s live stream: www.eurozine.com/…/live-streaming-from-the-central-europea…/

And to view the full schedule for main programme and satellite events, click here: http://www.eurozine.com/…/central-european-forum-2014-prog…/

The sixth annual edition of the Central European Forum will commemorate the 25th anniversary of the Velvet Revolution.

The headline theme of this year’s Forum – and representative of an emphasis reflected in all of the debate panels – us and them, addresses the entrenched polarisation of our societies. This problem concerns not just Central and Eastern Europe, but also the nations of Southern and Western Europe. Twenty-five years after inhabitants of the former Eastern bloc were able to gain political and economic freedom, our societies remain divided, in some cases so much so that there is seemingly little left to hold them together. Our institutions, our public services, the very constitution of our public lives seems to have been paralysed by these divisions. The aim of this year’s Central European Forum is therefore to dissect the nature and implications of this phenomenon, looking not just at long term developments within European societies, but also at more recent concerns on the European fringe, including the Ukrainian crisis and the re-emergence of a more aggressive Russia.

Ten years in the EU: the Slovak and Czech path coincides with the launch of a new IVO book and, as in the book, seeks answers to the question of how EU membership has affected people’s everyday lives, the functioning of democratic institutions, human and minority rights, civil society development, a sense of European solidarity and support for the EU’s fundamental values.

What does the Ukrainian conflict mean for Central Europe? What can be considered to be ethical and meaningful stances vis-à-vis Russia? Which historical lessons are relevant to the present crisis? Should we look for guidance in the events of 1938 – aggression won’t stop of its own accord unless we take a stand – do we need to go further back to 1914 – if we allow war to flare up, will it stop of its own accord? – or do we need to find a new paradigm, relevant to our own era? Lastly, what damage have recent developments inflicted upon the idea of Visegrád and, more generally, that of Central Europe?

We seem to be living in an era, in which the concept of privacy is disappearing and our public spaces are rapidly shrinking. How has this been able to come about and what does it mean for us?

Society has become hopelessly divided into sealed-off sections, incapable of communicating with one another and each with the feeling of being victimised by the others. This phenomenon, a quasi poisoning of the collective mind, has affected and, to some degree paralysed, vast swathes of the world, with its impact apparent in Central and Eastern Europe, the US and many other parts of the world. What is its cause and what are its implications?

Co-organised by the Slovak Atlantic Commission, a member of the Central European Strategy Council.

The vision of a unified Europe, which is free and at peace remains unfulfilled. After several rounds of enlargement, signs of fatigue are apparent in both the European Union and NATO. Are there attractive Russia-centric alternatives to European and Euro-Atlantic integration? What must be done to buttress Ukrainian aspirations ,and those of other nations, in such matters as EU membership? Has Central Europe been active enough?

(Performed in Russian with English subtitles)

The play Discover Love has been awarded the French Republic’s prize for work in the field of human rights and has received the accolade of best Off-Off Broadway production from the New York Bloggers’ Association.

A discussion with the directors of the Belarus Free Theatre.

The greatest weapon used by Putin’s Russia in its ideological offensive is the preservation of the traditional family in its supposedly age-old format. Asserting this societal model as an inviolable moral value, the Russian government presents itself as the last bastion between its citizenry and their corruption through what it brands as European societal perversions. Which concept is more artificial – tradition or human rights?

13:00 – Parents and children of the revolution

People who were too young to take part in the revolutions of 1989 are now turning on their elders, saying: the only role your revolution has ultimately assigned to us is that of industrious multipliers of our own wealth. What if that is not enough for us?