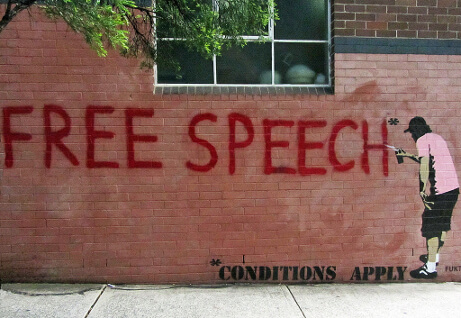 At 18:00 CET on Thursday the 5th May 2016, Project Forum will host a debate about freedom of speech and hate speech in Central Europe, looking at the very different approaches and consequences in Hungary, Poland and Slovakia.

This debate will be in English and will take place in Bratislava’s Next Apache café. A live stream of the evening will also be available on Time to Talk for those unable to be in Bratislava on the 5th May.

Freedom of expression or freedom to incitement? In the public’s interest or offending public sentiment? Project Forum looks at free speech in Central Europe and compares the Slovak situation with both that in Hungary and the widely-criticised new developments in Poland.

Slovakia ranks highly in international assessments of freedom of expression, but is seen to have a problem with hate speech, with Roma and LGBT groups amongst those most regularly targeted.

Hate speech featured prominently in Slovakia’s recent elections, in which a number of right wing parties were able to report large electoral gains. In particular, Marian Kotleba, the leader of Ľudová strana – Naše Slovensko [The People’s Party – Our Slovakia], has a record for inflammatory speech, referring to Roma as, for example, “gypsy parasites”. However, in a defamation hearing on that same phrase, the Slovakian Supreme Court found that Kotleba’s campaign slogan referred to “only those particular individuals who leech off the benefits that society provides them”. In such circumstances, it is perhaps unsurprising to hear that commentators in Slovakia see Kotleba and his party not as the cause, but more as the beneficiaries of a growing trend. They attribute a growing acceptance of intolerance and racism to the long-term cynicism of mainstream politicians, who, looking to deflect from their own actions, have often been quick to find scapegoats amongst the country’s minorities.

In contrast to Slovakia, Hungary and Poland’s standings have fallen considerably within the World Press Freedom Index, as critics accuse both the Fidesz and PiS governments of working to erode the media scene and to bring outlets under government control.

In Hungary’s case, the erosion of media freedoms has happened slowly but surely. Since 2010, a number of laws have served to increase government control and to put pressure on alternative outlets, while research undertaken between 2014 and 2016 suggests that harassment of those independent outlets which remain has now become commonplace.

In Poland, the change in approaches has been anything but gradual and the country fell a remarkable 29 places (from 18th to 47th) in the World Press Freedom Index in 2015. Although some long-term issues, such as the so-calledblasphemy law do exist, it is the current PiS government’s new legislation, which has been causing commentators the most concern. Despite only being in power since October 2015, the new government has arrested communist activists for “openly propagating a totalitarian system” and has quickly become controversial for its aggressive use of libel laws, its attempt to make it illegal to talk about “Polish death camps” and its new media law, which brought state media under the control of the Treasury Minister.

So, where are the boundaries of free speech in Central and Eastern Europe today and what consequences do the different approaches in Slovakia and Poland have? In Poland and Hungary, the concern exists that the state is trying to reconstruct the public sphere to create a monopoly of its own views on both present developments and formative past events, such as the Holocaust and the Smolensk plane crash. In Slovakia meanwhile, we have high levels of media freedom and few restrictions on free speech, but a situation in which toxic language has become widely accepted and is having an impact on both politics and, more directly, on the lives of members of minority groups within the country.

All of which begs several key universal questions about free speech, which this debate will seek to address:

To find out more, visit Bratislava’s Urban House café or be here on Time to Talk (where we’ll have a live stream of the debate) on the evening of the 5th May.