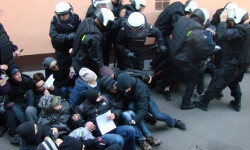 On the 27th of April Lukasz Bukowski, a member of Anarchist Federation Poznan, Poland, went to prison for three months. He had been charged and sentenced with the breach of bodily integrity of a police officer which had happened during the eviction blockade of a disabled woman and her husband, Katrzyna and Ryszard Jencz, from a tenement house in Poznan, Poland. Lukasz refused to pay the fine, which then was changed to community work and then to a prison term. He appeared at a prison in Poznan where he will spend the next three months.

Lukasz wants to bring attention to displacements and brutal evictions that still take place not only in Poznan but all across Poland.

Lukasz wants to bring attention to displacements and brutal evictions that still take place not only in Poznan but all across Poland. He refused to pay the fine because he believes that his act of defending the tenants was right. He also wants to bring attention to unequal and unfair treatment of tenants and to the repression that all people defending tenants’ rights face.

The eviction of Ryszard and Katarzyna (who is seriously ill and has been in a wheelchair for many years) took place on 25th of October 2011. Despite Katarzyna’s visible serious condition, the court, which issued the eviction notice, did not give them social housing (which is required by the law but courts often refuse to do it due to lack of social housing). So, in fact, the couple was evicted on to the streets.

Large police forces were mobilized and showed up at the tenement building a few hours before the eviction, cutting off the access to the building and the apartment. Around 70 activists tried to block the eviction. Some people living in the neighborhood also joined them but in the end Katarzyna Jencz, because of her worsening health condition had to be transported out of the building in an ambulance. The debt collector then seized the apartment.

During the blockade, three people, including Lukasz, were detained. He claims that the charges he faced were not valid and his conviction was a form of revenge for his social resistance. The police also charged two more people with leading an illegal gathering but they were both acquitted.

Every year Polish courts issue from 30,000 to 40,000 eviction notices. Debt collectors perform about 8,000 evictions, they are often accompanied by the police.

Every year Polish courts issue from 30,000 to 40,000 eviction notices. Debt collectors perform about 8,000 evictions, they are often accompanied by the police. Other people with eviction notices simply leave their apartments before the evictions. The main reason of evictions is the debt growing because of high rents, utility bills, low income and precarious forms of employment as well as no welfare support. Very often the evicted tenants do not get the right to social housing. The authorities do not acknowledge the constitutional duty to provide social housing for people with the lowest economic status, people who are ill and unemployed. The case of Katarzyna and Ryszard Jencz is one of the most appalling ones, as it has showed the ruthlessness of evictions and displacements by the city authorities who often represent the interests of landlords and developers.

We as a movement believe that Lukasz is a political prisoner, a prisoner of conscience, who demands respect for tenants’ rights and demands stopping evictions. His imprisonment marks the beginning of another campaign against evictions, illegal displacements and violating tenants’ rights. Together with Lukasz we demand stopping evictions and changing the unfair social-housing politics that causes so many human tragedies. The victims of these politics are often the poorest people.

We are calling the authorities of Poznan to stop 250 evictions from social housing that they have announced would be performed until November and to guarantee that every inhabitant of this city has a place to live. Show the real will to change the social housing politics!

At the same time we are calling all participants of the anarchist and tenants’ rights movements to show their solidarity with Lukasz, all evicted tenants and victims of police brutality. We are meeting on 7th May at 1 p.m. in front of the jail on Mlynska Street in Poznan.

This text first appeared on rozbrat.org.