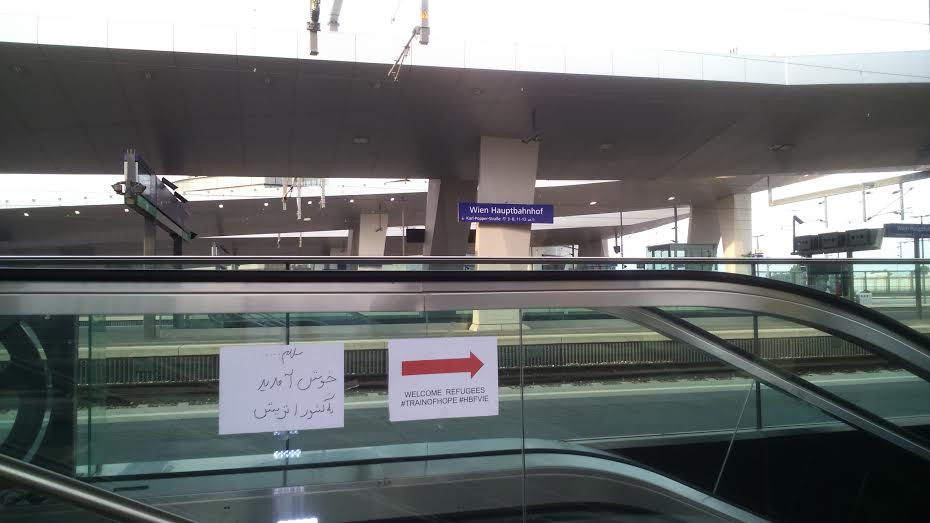 After WWII, the Hungarian Uprising became the first major challenge for the young Austrian Republic. Even today, its border region with neighbouring states continues to be highly affected by the outcomes and shortcomings of European refugee policies. What is needed is another wave of solidarity like in 1956.

In that year, the Austrian military, which had been re-established only a year earlier in 1955, already went through its first acid test. Border patrols were ordered to open fire at every soldier crossing the Austro–Hungarian border. After a Soviet Soldier died from Austrian bullets while hunting Hungarian refugees, the word “war” spread. Bridges were prepared to be blown up while the tragedy of the Hungarian revolution went on. When it became clear that the successful revolution was about to be defeated, approximately 200,000 people fled Hungary. 70,000 alone reached Austria over the bridge of the border-village Andau, overall a 180,000 stayed – at least temporarily. Formerly hosting a Nazi elite school (“Nationalpolitische Erziehungsanstalt – NAPOLA”), a refugee camp was established on the area of a former K.u.K. barracks in Traiskirchen, close to Vienna and the Hungarian border. It gave shelter to up to 6,000 refugees. Despite of post-war scarcity, they were supplied with the most necessary, private individuals helped wherever they could, and authorities were looking for ways to keep the border open.

Today about 4,000 refugees – two thirds of the camp’s original capacity from 1956 – mainly from Syria and Afghanistan live in Traiskirchen. The camp is supposed to give short-term shelter to 400 people. Upon arrival, every refugee in Austria has to undergo a registration process in the camp. Whether they can stay in Austria or not (at least for the time of their asylum procedures) is decided by the Dublin-III criteria. If the decision is positive, refugees are then to be transferred to another place in Austria. But the problem is: there is no other place. For months, politicians have been fighting over the distribution of refugees between the federal states. Of these states, only the city of Vienna is fulfilling the pre-negotiated quota (without having a real say in the matter considering its closeness to Traiskirchen and the fact that a lot of refugees are “stranded” in the city).

In the meantime, in the Traiskirchen refugee camp, run by a private for-profit Swiss security company, nearly everything is about to collapse: over 700 have to sleep in tents around the buildings – in case of thunderstorms, the ministry for inner affairs rents buses to give them shelter; refugees do not receive adequate psychological and medical care; teenagers to be transferred to another camp vanish without a trace; and there is simply not enough food, clothes, or hygiene products. NGOs such as Amnesty International call the current situation a “humanitarian catastrophe”.

But there is more to it than a dysfunctional system collapsing under half the number of refugees coming to Austria (approximately 85.000 this year) than in 1956. The current situation has been intentionally provoked and serves as a symbol of fear. Refugees should fear the Austrian conditions and Austrians should fear the refugees. It is a dangerous game, mostly played by the conservative party (ÖVP) supported by the social democrats (SPÖ), their senior coalition partner. As the Polish-British sociologist Zygmunt Bauman put it, the refugees are portrayed as “walking dystopians”. They are used to mobilize nationalism and xenophobia.

In fact there are a lot of “solutions” suggested right now that one can only describe as reactionary. There are voices – coming not only from the right – openly questioning the universal declaration of human rights, the Geneva Refugee Convention, and hence the individual right for asylum. The Austrian minister for foreign affairs proposed to define new safe countries from which applications for asylum would not be possible. The same politician wants to re-establish border controls, is asking for detention camps (“hotspots”) at the EU borders, and urging the international community towards military interventions in Iraq and Syria while Austria withdrew its UN soldiers from the Golan Heights at the first sign of danger in 2013 (right before the parliamentary election).

As we entered the at least sixth month of debate on how to deal with Traiskirchen and the increasing number of refugees coming to Austria, the “Western Balkans Summit” took place in Vienna. Politicians from the western Balkan States attended the conference as well as the head of the Austrian government, chancellor Werner Fayman (SPÖ), vice-chancellor Mitterlehner (ÖVP), the Austrian president Heinz Fischer, the EU High Representative for Foreign Affairs Federica Mogherini and the German chancellor Angela Merkel. On August 27th, the day of the conference, an abandoned truck was discovered on a motorway 40 km south-east of Vienna, 50 km north-east of Traiskirchen, containing 71 suffocated refugees from Syria. Responding to the tragedy, Merkel said that Europe has to solve “topic migration” quickly and on a European level. Earlier in the same week, she called migration the “next major European project”, deliberately mixing the terms migrant and refugee. The Merkel administration is trying to reframe the problem: the task of giving shelter to war refugees is transformed into a general migration problem.

What the state used to do in 1956 and also 1989 – helping refugees to cross the Hungarian border, functioning as a “human smuggler” – is now going to be repeated by private individuals.

There is a simple causal link between the rising number of applications for asylum and the outbreak of the Syrian civil war in 2011. No one is doubting it. The EU is dealing with the acute problem of war refugees and the latent problem of poverty refugees at the same time. European leaders have to acknowledge that they missed the opportunity to give sufficient perspective to the Balkan States, believing instead that the “attractiveness” of the EU would be enough to initiate developments in these countries. The EU pays the price: every year tens of thousands of people from the Balkan States apply for asylum – mostly in Germany. At the very least, the failure of the association agreement and the crisis in Ukraine should have made Europe understand that simply offering the “better alternative” is not enough. The EU is turning its back on the problem of massive inequality within Europe. Apart from that, the legal definition of a “real” refugee breaks down in the face of the inhumane conditions under which for example the Roma live in Eastern European states (which is by far the largest group of asylum seekers from the Balkan States that Merkel & co. want to get rid of).

Following Merkel’s logic of dealing with a new period of mass migration, the fate of the dead refugees is unbelievably tragic but – in the diction of the European leaders – an unfortunate incident caused by the (natural) effects of globalization. No one is really responsible apart from refugee smugglers. Bearing in mind that a lot of these smugglers are actually real criminals, this move still means taking the symptom for the cause. Even if there was something like a European quota system for asylum seekers, it would function as another, even grimmer outer wall of Fortress Europe. If there were collective criteria for asylum, negotiated with states following a strict anti-migration policy, such as Hungary, Poland, or the Czech Republic, the result would not exactly be a welcoming culture. We would most likely have even bigger camps than Traiskirchen on the EU borders, there still would be human smuggling and fatal tragedies. The problem is about to be shifted from the territory of the EU to its borders and deadly incidents and overcrowded refugee camps are used as an argument to do so. At the same time, the EU wants to solve the problem of injustice in Europe by mixing poverty migration and war refugees, playing them off against each other.

But there is also overwhelming solidarity and private initiatives that could thwart these plans. In the last weeks, hundreds of private cars brought food and the most needed goods to Traiskirchen. On Monday, August 31st, 25,000 protesters claimed the streets of Vienna, rallying against the European policy of asylum, the Dublin-III treaty, and the detainment of refugees in Hungarian camps. Under the pressure of at least 2,000 refugees waiting at the railway station Budapest Keleti for a train to Germany, the Hungarian government was forced to let a few of them depart. The Austrian Federal Railways sent unscheduled trains to transport them across the border and activists provided refugees with water, food, and money at train stops in Vienna, Linz, and Salzburg. It seemed that these trains went through a small window of opportunity as the Hungarian prime minister was reminded to fulfil the Dublin rules. With this window closed, another private initiative is stepping in, planning to replace the trains by private transportation. What the state used to do in 1956 and also 1989 – helping refugees to cross the Hungarian border, functioning as a “human smuggler” – is now going to be repeated by private individuals. Fortress Europe is not about to fall but one can make out some changes. Whether these changes will be for the good or ill is being decided right now.