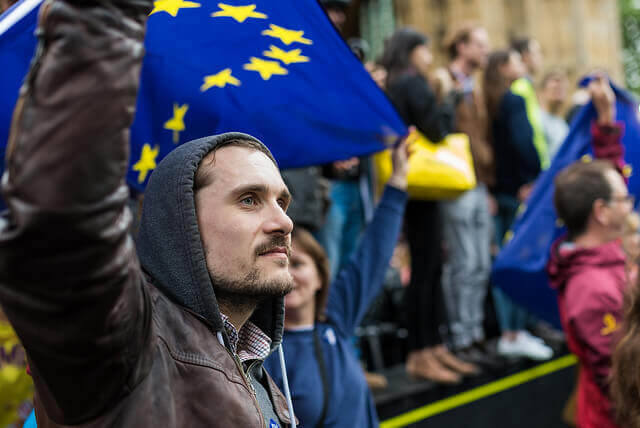 Instead of vilifying (and verbally neutralizing) the populists as fascists and racists, and their voters as deluded and stupid (or racist themselves), we had better learn from them while scaling up the fight against them. The successes of the right are the failures of the left. More precisely: our failure is to have insufficiently realized that, like the populists, we need to move to some extent ‘beyond left and right’. Surely not in order to copy them or to repave the Third Way, but instead to restore social democracy’s time-honoured mission: to realize redistributive justice and provide social protection to the casualties of globalization.

First, we cannot remain blind to populism’s seductive social dimension: its defence of the traditional welfare state (though for natives only). This welfare chauvinism of ‘our own people/jobs/benefits first’ is disconcertingly close to the social nationalism which is advocated by the radical left. Les extrèmes se touchent, since both leftwing and rightwing populists promise the social protection which the governing neoliberal right actively undermines and the mainstream left fails to deliver. This political logic applies equally in the West and in the East, where post-1989 capitalist shock therapies have likewise created a generation of modernization losers, and in some cases (Hungary, Poland) have empowered an authoritarian ‘populism from above’.

Secondly, we need to acknowledge more systematically that a new political-cultural divide has opened up at right angles from the traditional socio-economic left-right opposition. This cultural dimension has always been historically active in the form of religious divisions, and was often successfully activated in order to deflect and dampen the class conflict. In a more secular age, it increasingly focuses on ethnic, national and gender identities and hence on the virulent issues of immigration, integration and European political unification.

Both the old left and the liberal right have traditionally privileged the socioeconomic dimension, reasoning from a ‘Marxist’ base-superstructure model which downplays cultural and identity issues as secondary and derivative

Both the old left and the liberal right have traditionally privileged the socioeconomic dimension, reasoning from a ‘Marxist’ base-superstructure model which downplays cultural and identity issues as secondary and derivative (‘it’s the economy, stupid!’). The favourite antipopulist strategy of the old left is therefore to rekindle the traditional left-right dichotomy, which is taken to represent the ‘real’ underlying social divide. According to the Marxist critique of religion, economic anxieties and grievances are insiduously ‘deflected’ towards cultural ones, engendering forms of false consciousness (in the present case, nationalism and racism) which make people act against their ‘objective’ material interests. In this mindframe, ‘working class conservatism’ necessarily appears as something illegitimate and unreal.

But clearly, the cultural and identity dimensions of politics must be taken much more seriously as independent forces of division and conflict, particularly in a ‘knowledge society’ which is increasingly stratified according to levels of education. Both immigration and Europe are such virulent issues because they are located at the crosspath of the economic and cultural axes, simultaneously addressing anxieties about economic insecurity and about the perceived loss of national community. Any credible politics of hope rather than fear therefore needs to target both dimensions, without reducing the one to the other, and speak to people’s economic and cultural concerns with equal compassion and seriousness. This anti-reductionism of course also implies rejecting the populist conviction that economic problems ultimately derive from cultural ones (‘it’s the culture, stupid!’), and will vanish as soon as we halt immigration and/or leave the euro and/or the EU. We can and must do better than the populists on both counts: offering robust social protection for those in precarity (the modernization losers), while simultaneously providing a cultural narrative which is strong enough to lay their anxieties about a ‘loss of country’ and ‘loss of home’ to rest.

It is a tragic mistake to believe that true welfare democracy is only possible within national borders.

This first of all requires a much more principled resistance against neoliberal austerity and fiscal budget-balancing policies both at home and on the broader European scale. The mainstream social-democratic left has pacted far too much with neoliberal political forces, allowing the populist parties to steal their social agenda. Nation-states have more redistributive leeway than they think (or choose to exercise) in erecting protective buffers against global financial markets and other multinational powers. But it is a tragic mistake to believe that true welfare democracy is only possible within national borders. Durable social protection against the bads of globalization is only possible if European nations are prepared to transfer bigger chunks of their economic sovereignty to supranational institutions. Without such a European political shield for the national welfare states, both leftwing and rightwing social nationalism are doomed.

Secondly and symmetrically, we need to give cultural concerns equal political weight, and address the insecurity of those who (think they) suffer from a loss of identity control and live in (or are talked into) fear of the Other. This requires a deeper appreciation of people’s craving for shared values, sense of dignity, collective identity and cultural belonging, including their love of home and country. It is a long-standing but unfortunate habit of the left to view such emotional identification as suspect, and to refuse to entertain something like a positive national identity. But if we want to counter the false populist clarity about these issues, we must develop a morally uplifting vision of who we are and want to be as a nation and as European citizens. In other words, we need to develop an alternative patriotism, which does not exclude a growing love for our common European homeland.

We need to develop an alternative patriotism, which does not exclude a growing love for our common European homeland.

Interestingly, the new political polarization which has arisen around the Dutch referendum on Ukraine, the Austrian presidential elections and the Brexit vote, in ranging a green and liberal left against the populist right, cuts across the traditional left-right opposition and erodes both the political middle and the existing party system. This new tangential division tends to separate the champions of the open society from those who want to keep globalization out in both its economic and cultural forms. Like its economic form, cultural globalization pairs goods with ‘bads’ (such as the unregulated free movement of labour and the concentration of immigrants in poorer neighbourhoods), which weigh most heavily on the most vulnerable and least well-off. Income protection, retraining opportunities and job creation in public services must therefore be flanked by a much better political management of immigration and more focused efforts at cultural integration. ‘Controlled immigration’ must be an inevitable part of this.

A New Deal for Europe must therefore be two-pronged: next to improving public service and welfare protection by the nation-states and a truly Social Europe, we need to mount a cultural civilization drive against the prison guards of the closed society and their prisoners, in a proud defence of pluralism and diversity, free-thinking and tolerance. While guaranteeing social security and social justice, we must simultaneously challenge people to broaden their horizon beyond the national cocoon and the monocultural society, in the European spirit of curiosity, moderation, and self-critique. Such a dual strategy of economic betterment and moral cultivation precisely constituted the ambition of what what the early decades of the twentieth century knew as Cultural Socialism. In the twenty-first, it may still form the heart of a European ideal of civilization which may lift up our small nations to a bigger, more generous and adventurous sense of who we are.

This article was originally published on Social Europe.

ck Pels is a Dutch sociologist and freelance political writer. He has taught at various Dutch and English universities, and was director of the research foundation of the Dutch Green Party until 2013. See further www.dickpels.nl. His new book A Heart for Europe. The Case for Europatriotism, is available as a download.