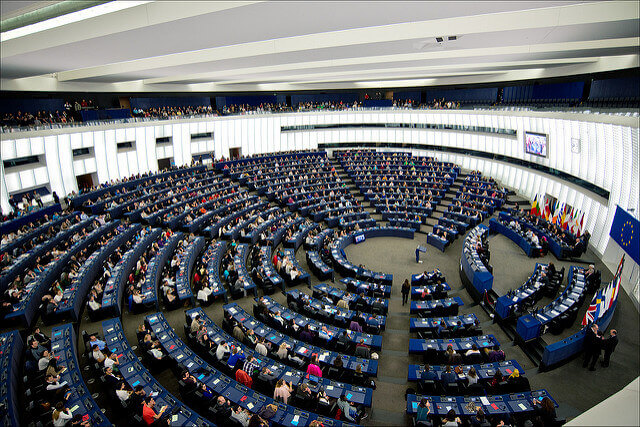 It has become a cliche to say that the correlation between steps towards European supranational integration and the state of an economy is directly proportional. If we were to add the phrase “under abstract circumstances“ to the mix, we would probably be more accurate. Nowadays nobody seems to be even talking about deepening European integration. All the influential figures prefer to solve current problems first and then to focus on creating a brighter future. Again, the problem lies in their very perception of a problem.

The EU would have to fully subject itself to a new kind of thinking and reconsider the predominantly humanitarian perception of “the refugee crisis”.

Every existing power, which is rooted in the structure of the EU and its member states’ institutions, by nature, requires a multitude of potential fields of struggle. This is also the exact reason why oponents of European integration celebrate when the integration debate is diffused by polarizing narratives. To avoid any misunderstanding, we should bear in mind that no topic is of minor importance; there are only different discourses and pseudo-struggles. For example, the controversy surrounding refugees. The EU has constantly had to face its own impotence in order to become a respected power within the framework of international relations. We cannot underestimate the role of external factors, which are strongly influential to the development and integration processes of the EU. However, these mirror the incapability of the EU to act as both a united and independent player. Surely, someone could object that the EU strongly influences international relations. But if the EU were fully integrated it would also be capable of more audacious visions and actions. For a start, the EU would have to fully subject itself to a new kind of thinking and reconsider the predominantly humanitarian perception of “the refugee crisis”. This approach is only possible if the EU changes its structure to that of a sovereign state, where the parliament will enforce internal unifying measurements. However member states are afraid of losing their ability to influence elections. Under the current circumstances, a weak European parliament works to the advantage of indivual members states. The inability to politicize any issue properly is the fundamental problem of half-way solutions to the integration process.

More specifically, we can consider the example of selling weapons to conflict zones or directly to states which have waged war. Recently, the European parliament has voted in favour of an EU-wide embargo on selling arms to Saudi Arabia, who have conducted military operations in Yemen, resulting in high civilian casualties. This resolution could be effective only if all the member states would adopt it, but it is non-binding. Noam Chomsky, a supporter of DiEM 25, recently called the EU “one of the more promising developments of the post-World War II period”. However, we have to ask, how can it cling onto this legacy when it is barely able to effectively counter the act of spreading violence by a simple arms trade ban? Of course, we should take into account the responsibility of “bad corporations” and governments for the actual arms trade, but this accusation should only be supplementary to systemic critique.

First and foremost, we shouldn’t focus on “Why?” but rather on “What?” and “How?”. Certain areas clearly block the integration process. Foreign policy, taxation, wage policy and of course, welfare policy are, significantly, within the competence of the member states. The European and foreign policy committees of member state parliaments have recently voted on whether dispatched labour throughout the EU should be rewarded in the same way as domestic labour. So far the regulation only goes as far as paying the minimum wage from the respective country to where the labour is carried out. Sticking to this hybrid adjustment only serves to highlight the inequalities within the EU, and so the Commission has attempted to set a higher goal and has called for a remedy. Nevertheless, some national parliaments voted against this regulation, arguing that they wanted to keep their market privileges. This can be seen to be a defensive act of post-socialist Eastern European countries which predominantly vote against the welfare of their own citizens.

The inability to politicize any issue properly is the fundamental problem of half-way solutions to the integration process.

Even though it may seem clear who is to blame and who should actually answer for this situation, a broader view is needed. Less developed countries will always vote against regulations that undermine their positions in a globalized market that lacks transnational, or at least EU-based regulation. They simply do not believe in these compensatory mechanisms. They would preferably seek different, more tangible tools for securing their positions, as we are witnessing now in the increasing of narrower alliances across various fields. This form of new, regional cooperation points to the impossibility of  deeper integration under the current circumstances.

Why are these deteriorating precautions implemented by states a growing source of popularity for right-wing populist parties? We should bear in mind that they can only attract the public if they are accompanied by a nationalist discourse. Nationalist discourse is neither stable nor determinate. It can occur in a varitey of situations and can provide a multitude of narratives in order to preserve the power of local structures. By taking into consideration the fact that the majority of states are not capable of implementig their own economic policies as the economy is globalised and so companies are able to easily escape ineffective protective state measures, the nationalist discourse must avoid any reasonable economic arguments. Additionally, in contrast to nineteenth-century nationalist movements, today’s nationalists can only use a blurred reflection of their famous predecessors because their narratives are deprived of any universal emancipatory content, which is able to evoke a positive image of a unified society. The reason for this is simply the absence of nineteenth-century socio-economic structures.

By being aware of their own impotence, nationalists lean towards limited issues that cannot solve existing problems and their implementation would not have a major impact on the welfare of citizens. After all, what could be more attractive for international corporations than states mutually competing for their favour within a developed and unified market? Moreover, what could be more attractive for a superpower than a hybrid lacking in real political force to combat the turmoils neighbouring its own territory?

The problem with nationalist discourse in the post-World War II world is that it only emerges as a wide phenomenon when political discourse lacks its core emancipatory potential. That means that it only reflects or reacts to socio-economic circumstances, but does not create them. The only remaining activity for the national state is to alleviate the consequences of various crises, in particular by proportionally distributing diminishing social welfare to its citizens. Social welfare has been based on the citizenship principle ever since it was “launched” and we have not been able to update it for new, inevitable challenges.

We are constantly being threatened to lose our utopian thinking and to leave the battlefield to the enemies of the European idea.

Any progress within the European framework has always been triggered by utopian thinking. Even the very idea of the European Union is utopian, which only demonstrates the realist consequences of utopian discourse. The impuissance to form such thinking gives way to various particularities that help the nationalist discourse to thrive. To define it in psychoanalytical terms, the discourse is symbolically castrated, or in other words, it is unable to be a subject of the desirable change. Although it may seem to be a theory, what we say and how we say it really matters. However, we are constantly being threatened to lose our utopian thinking and to leave the battlefield to the enemies of the European idea.

Nevertheless, there are hints of alternative and perhaps brighter aspects to this decay. Growing nationalism may dialectically help to establish popular movements, which may lead to an opposition emerging that would be able to act rather than react to the idea of a European programme. Institutional opposition can also be created by the nature of  structural relations among European institutions. As such it is important to consider how the European parliament will exploit any further struggles, which occur among different policies of respective member states as well as other institutions.