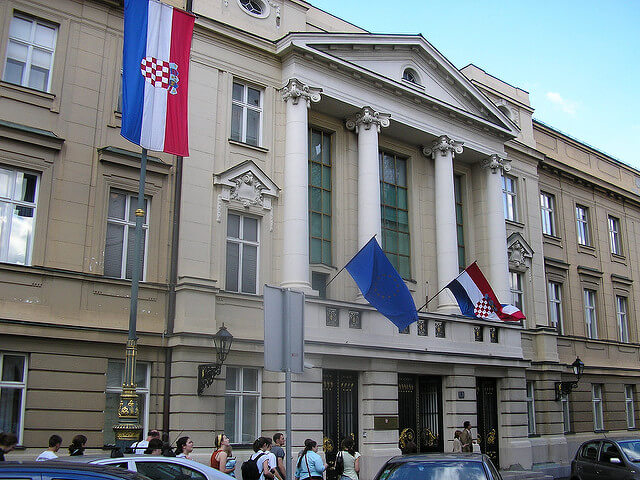 Coalitions that are not actually coalitions and other political creatures

To answer this question we have to go back in history, to 2015. During the last elections we had two massive blocks. One consisted of the SDP (Social Democratic Party) and an array of centre-left and left-liberal parties, while the other consisted of HDZ (Croatian Democratic Union), other right-wing and even marginal far-right parties. If we go back only two or three months before the elections, the polls indicated a solid advantage for HDZ. But the catastrophic political strategy of Tomislav Karamarko, who was then the leader of HDZ, of radicalizing public discourse with extreme right-wing talking points resulted in a sudden decrease in their polling numbers. The general sentiment just a few weeks before the elections was that the Croatian political scene has an established duopoly and that the race was going to be tight.

The result wasn’t only tight, it was a tie. HDZ and its political partners in the so-called Patriotic Coalition won 59 seats. SDP and its political partners won 56 seats, but IDS (Istrian Democratic Forum), a regional party which is politically closer to SDP than HDZ, won 3 seats. So, the difference between the two political blocks was zero. The elections also brought a new force to the political scene, Most (The Bridge), with 19 seats in the Croatian parliament. Alongside the representatives of ethnic minorities (which in toto have 8 fixed seats and which in the last ten or so years were not an irrelevant factor in the process of forming parliamentary majorities), the remaining number of seats comes down to 6, split between four parties, of which none exceeded two seats.

What ensued after the last election was an unprecedented political drama that makes The House of Cards look like children’s play.

What is Most? Most wasn’t a coherent political party. Moreover, it didn’t even have a party structure. It consisted of a group of predominantly local politicians, who saw an opportunity in gathering protest votes. But it turned out that there were more protest votes up for grabs in Croatia than they expected, so they ended up, primarily to their own surprise, as a crucial element in the arithmetic of forming a parliamentary majority and government. Their predicament after the elections had one additional dimension. Namely, their campaign slogan was ‘neither with SDP nor with HDZ’.

What ensued after the elections was an unprecedented political drama that makes The House of Cards look like children’s play. Let’s mention only the highlights. The two blocks started fighting for the support of the ethnic minority MPs. The majority of them gave support to SDP, but some of them didn’t, most notably Mirko Rašković (SDSS – Independent Serbian Democratic Party). He refused to follow his party line and instead opted to support HDZ. At that moment, a document from SOA (Security and Intelligence Agency) was leaked to the press which showed that Rašković had been a Croatian secret agent behind enemy lines during the war and that he had an honorary military pension. The document was signed by Tomislav Karamarko, at the time the head of SOA. Rašković resigned from SDSS, became an independent MP and stuck to his support for HDZ.

As Most didn’t really have a party structure, the greatest question was ‘will they be able to stick together and act as a block?’ Photos were leaked to the press depicting one of Most’s MPs, Drago Prgomet, a former member of HDZ, while he was allegedly in secret negotiations with Zoran Milanović, the president of SDP and former prime minister. The most distinguished member of Most, Božo Petrov, and other members accused Prgomet of negotiating without their knowledge. Prgomet was subsequently expelled from Most and became an independent MP.

In spite of the initial crumbling effect – in the meantime they had lost more MPs – Most managed to consolidate their ranks and still had enough MPs to be a decisive factor in the forthcoming negotiations with SDP and HDZ.

Most first proposed a big coalition government comprised of SDP, HDZ and Most. The proposal was rejected by both HDZ and SDP. What followed was a long period of negotiations on two parallel tracks: Most-SDP and Most-HDZ. After weeks of negotiations, it seemed that Most and SDP finally struck an agreement that they would form the new government. But that wasn’t the end of the political drama. Just a few days after the news broke that they’ve struck an agreement, Božo Petrov held a press conference to declare that Most will not be forming a government with SDP. He accused SDP of putting pressure on Most’s MPs and using government intelligence agencies in surveillance ops against him and his colleagues. Government agencies denied such accusations and Petrov never provided any evidence for his claims.

The current government was doomed from the beginning.

HDZ seized the opportunity (SDP accused HDZ that they were the ones who really created the opportunity) and in a paradoxically fast round of negotiations (after weeks and weeks of prior negotiations, this round lasted only a few days) struck an agreement with Most to form the government. But there was once more catch. Most insisted that Tomislav Karamarko couldn’t be the prime minister and Božo Petrov also declined to take up that position. Most insisted, at least when addressing the media, that the prime minister should be an ‘expert’ – although they never defined what is the ‘expertise’ a prime minister should have.

So, Tihomir Orešković became the prime minister. After this decision by HDZ and Most, the biggest question in Croatia was “who is Tihomir Orešković?” He was flown in from Canada, basically overnight, and presented as the new prime minister. Orešković was a former corporate manager in a big pharmaceutical company. The narrative was twofold. Orešković presented himself as a patriot from Canada who decided to give up on his extremely well-paid job as a corporate manager to take up the job of Croatian prime minister. The narrative of HDZ and Most was that Orešković’s expertise as a corporate big shot was just what the doctor prescribed for the struggling Croatian economy. The first press conference of the new prime minister was a surprise, to say the least. Orešković could hardly speak Croatian.

The narrative was perhaps romantic, but the political reality was something completely different. Although Orešković was appointed as the new prime minister, Petrov and Karamarko held the two deputy positions in the government.

The marriage that never was

This government was doomed from the beginning. Orešković was formally the prime minister, but parliamentary support was by definition mediated through Karamarko and Petrov, who thus had real political power. And their relationship, the relationship between Most and HDZ, was never really great. It was an ongoing political struggle between HDZ, which wanted to have the upper hand in the government, and Most, which was fighting for its political existence on the highest Croatian political scene.

Furthermore, Karamarko’s position in HDZ was far from secure. The only reason that he remained the president of HDZ after the elections consisted of the fact the he had managed in a last minute Hail Mary to secure a parliamentary majority and subsequently form the government.

After a few months, the Croatian papers broke a new scandal. It involved Karamarko’s wife, whose consulting company received payments from a lobbyist of the Hungarian petroleum company MOL. It must be mentioned that the Croatian government is in conflict with MOL, after the Hungarian company acquired the majority of shares in the Croatian petroleum company INA in relatively shady circumstances during the administration of former prime minister Ivo Sanader (HDZ). Sanader is currently in court facing serious corruption charges.

The relationship between Most and HDZ became more tense and Karamarko’s shaky position in HDZ became even shakier. In June 2016, HDZ and Karamarko tried to play a political gambit. HDZ with the opposition in parliament (practically everybody except Most) gave a vote of no confidence to Orešković’s government, the same government they installed, in the hope of reshuffling the majority in parliament and forming a new government without the need for new elections. But the gambit was not successful.

In the meantime, Karamarko resigned as the president of HDZ and a new party leadership was elected. The new president of HDZ is Andrej Plenković, who returned from the European Parliament to take charge of the party. Plenković’s first moves consisted in repositioning HDZ more to the centre and abandoning Karamarko’s strategy of utilizing extreme right-wing rhetoric. HDZ disassociated itself from its earlier far-right coalition partners and is running alone in these new elections.

SDP on the other hand remained loyal to its former coalition partners, with one exception. The Croatian Labour Party was replaced by the former coalition partner of HDZ – namely, HSS (Croatian Peasant’s Party). This can be seen as an attempt by SDP to tap into the centre-right vote. This strategy of SDP became more evident when Zoran Milanović recently said that he “has a left heart but a conservative head.”

The polls are still giving good numbers to Most, although they have clearly shown that they have no ideological backbone and lack any coherent political compass. They are still the third strongest political option, behind HDZ and the block around SDP. Furthermore, the polls suggest that SDP has an advantage in front of HDZ, but they also show some positive trends for HDZ.

It’s not impossible that we could be facing a very similar situation as in the elections held in November 2015.

Zoran Veselinović is an editor of Radnička Prava