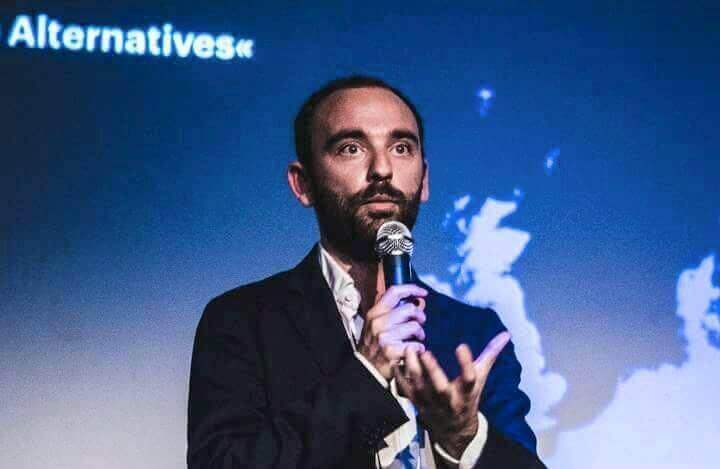 Sławek Blich: European Union leaders came together on Saturday in Rome to celebrate the 60th anniversary of the Treaties of Rome. They signed the ‘Rome Declaration’ in emphasis of their commitment to renew European Unity and proclaimed a ‘Common Future.’ Should the left be celebrating, too?

Lorenzo Marsili: It seems that the 27 member states met in Rome mainly to celebrate the disintegration of the European Union. The EU in its current form bristles with tension that leads to a potential disintegration of unity and cohesion within the European Union. The problem is that its disintegration has been caused precisely by the actions of those in power over the last years: austerity measures and the incapacity of national and EU elites to rethink the economic and fiscal policies of the European Union (even when it is evident that they have failed). Thus the left should not be celebrating, but should be working to build an alternative at once to the failing status quo and the political monsters that it breeds.

Poland’s actual leader, Jaroslaw Kaczynski, warned European Union leaders that their decision to reappoint Donald Tusk as president of the European Council was a step towards disintegration of the bloc. As a neutral political commentator, what did you make of the recent Polish diplomatic failure?

Kaczynski, the prickly PiS leader, who was not even in Brussels, committed diplomatic suicide for the wrong reasons. It was a purely national game of undermining his political enemy – Donald Tusk. But it was interesting to witness this for a different reason.

We all need to understand that positions such as president of the European Council are not meant to represent national interest(s). European institutions must not act as representatives of specific countries or, what’s even worse, banks or financial institutions, but on behalf of the European electorate…

Did you say “European electorate”? There is no such thing.

There is a slightly forgotten point of Antonio Gramsci, which says that a demos emerges in the act of political struggles, by resisting oppression and making common demands and claims. If we start thinking about the demos in plural, as a dêmoi, then you’ll see quite a lot of emerging transnational dêmoi in the European Union.

Like The Black Protest that spread across Poland, and then abroad?

The Black Protest that spread across Poland and then abroad proves you can shift the way political power operates through popular power.

Yes, it proved that you can shift the way that political power operates through popular power. Look at the pan-European Refugees Welcome movement, where people joined hands in a demand for a different response to the humanitarian crisis in Syria. See the large-scale mobilisations on trade policy, like the anti TTIP and CETA protests. Anti-ACTA protests mobilized millions in Central and Eastern Europe. Something is clearly going on in Europe, and could potentially represent the breeding ground for a truly pan-European political space.

The latest report by the Batory Foundation showed that Polish pro-European attitudes are very shallow and interest-based. Social coherence and social trust in the EU are non-existent. Isn’t the European demos just a theoretical construct mainly used by bored intellectuals?

There is a clear sense of European belonging and protection that comes with the participation of Central and Eastern European countries in the European project: just imagine how Poland would deal with Russia had it been left out of the EU and forced to act alone. Think of the great exchanges of people between Central and Eastern Europe and the UK or Germany, which is not just a story of labour migration, because labour is never just that, but also creates a complex network of attachments. All of this is a beginning for a European citizenship…

So instead of building a brave new world on the rubble and ruins of the EU, DiEM25 makes a radical claim to rebuild the European Union.

Indeed. We need to find the courage to change both the European Union and its member states before we turn them all into a bunch of loosely connected, vulnerable, racist and peripheral nations. Can it be done? Look at the far right. Look at the European countries that have strong, xenophobic right-wing parties that are not in power – think of France, Austria, the Netherlands or even Italy – and what you notice is that the center is shifting towards the policies of Le Pen, Wilders or Hofer. This is why the centrist government of Austria funded and initiated the construction of a “migrant fence” on the Italian border. In this sense the right-wing forces have already won and shifted the boundaries of the political field. The same can and needs to be done the other way.

Another headache is that the economic crisis of 2008 and subsequent austerity measures taken by the Troika turned many formerly leftist and pro-European parties against the EU.

I would not overestimate the number of progressive forces that believe the EU cannot be saved.

The disillusioned rebels within Syria, the left wing parties in Portugal and Italy, Jeremy Corbyn’s Labour Party, not to mention Die Linke in Germany…

The left should recuperate ambition instead of cherishing left-wing melancholia.

Parts of them. But this is the trap we need to move beyond: we find the current policies of the EU unacceptable, so the only solution is to get away from the Union. People need to recognize that the exact same policies that they oppose when it comes to the European Union are eagerly implemented by their nation-state leaders. Theresa May has not come to deliver prosperity and social justice to the British after Brexit. The left should recuperate ambition instead of cherishing left-wing melancholia. We need to remember that policies and institutions are the result of political struggle and the capacity of our own ideas to captivate people’s’ imaginations. And for this to become common sense.

The reforms enforced on Greece saw people’s wages and welfare benefits slashed, and the economy shrunk by roughly 30 percent under the leftist government. How do you plan to convince people not to vote for the Golden Dawn?

We cannot participate in a put-on show and say that the situation is improving and that austerity reforms are improving people’s lives. We need a transnational support mechanism and cooperation of political parties willing to step in and support a country that decides to disobey policies that are destructive and impossible to implement. Which is precisely what we lacked in 2015 when Greece was crushed without any political party or trade-union putting up a real transnational political fight.

But the rise of populism is turning more countries into what we call illiberal democracies, while some of them, Poland and Hungary included, tend to undermine European integrity and flirt with other geopolitical powers, Russia included. In this Manichean world of The Bright vs. The Dark side, it gets ever harder to abandon liberals and vote for an alternative.

Let me give you an example from the United States. We have been told the fable that unlike Europe, the US managed to overcome the economic crisis. But if you look deeper, we will discover that 43 million Americans are living on food stamps, many of the new jobs are what David Graeber calls bullshit jobs, and 90 million have given up looking for proper employment. American democracy and its economy are so rotten that someone like Donald Trump was elected as president.

The question is really how to move beyond the failure of a model started 30 years ago by Margaret Thatcher and Ronald Reagan, what is called market fundamentalism.

So, the question is really how to move beyond the failure of an economic model started 30 years ago by Margaret Thatcher and Ronald Reagan, what Stieglitz calls market fundamentalism. Ultimately, what we really need to get out of is not the EU, but the destructive dogma of neoliberalism deeply entrenched in our institutions and nation states.

Are the liberal elites our enemies or allies?

They are our opponents in the sense that they are the main force behind the catastrophic policies of these years. But our ambition should not be merely that of fighting liberals, but that of shifting common sense. And that means shifting the very way that the liberal elites themselves operate.

How do you want to achieve that?

We think that Europe does not need a change in speed, but a change in direction. Over the past few months we managed to build a movement comprising over 40 thousand members coming from all European countries. We consulted and discussed our ideas on how to formulate an alternative to the TINA paradigm – this is why we came up with the “European New Deal” program – a coherent proposal involving what is to be done and how to restructure fundamentals of the European Union to make it work for its people. We offer a set of ambitious policies concerning economic growth, strong ecological conversion plan to make our economies sustainable, and an anti-poverty program to tackle extreme poverty and energy poverty. And lots more.

Will DiEM25 act as a political party?

We think it is necessary that social and political forces that are alternative to both the current establishment and the nationalist backlash come together at European level to open up a third space. This is our appeal to them: let’s open a dialogue and build a process of convergence that enables us to reach the next European elections with a real pan-European political alternative, from Portugal to Poland.

How does one join DiEM25?

Diem25 is open to all. Just go on the website and sign up. If you’re a member of a political party or a movement, go and talk to them to foster a cooperation with DiEM25. We need to speak to the majority who has all the votes and against the minority who has all the money. We are in this together, and we’ll get out of it together.