“Pod Save Austria”
Addresses on the State of the Nation(s)

In dependence of the French intellectual Julien Benda, who had imagined a speech to the European nation from within the uprising fascism, Ulrike Guérot addresses european citizens today with an appeal to complement the one market and the one currency by one common european Democracy.

ULRIKE GUÉROT is Professor of European Politicy and the Study of Democracy at Danube University Krems. In 2016 she published Why Europe should be a Republic. A political utopia and 2013, together with writer Robert Menasse the appeal Europe’s Choice.

IVAN KRASTEV is head of the Centre for Liberal Strategies in Sofia und Permanent Fellow at the Institute for Human Sciences (IWM), Vienna. Lastly he provoked broad debates with his book After Europe investigating the intersections of re-nationalisation, migration and Human Rights in Europe.

NICCOLÒ MILANESE is a director of European Alternatives, poet, philosopher and activist in Paris. He advises political and cultural institutions on questions of citizenship and political theory beyond national borders and institutional designs. His book Citizens of Nowhere. How Europe Can Be Saved from Itself is upcoming. 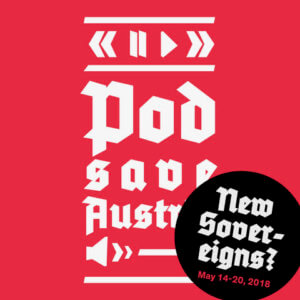 Pod Save Austria is a podcast, that has been recorded during „Wiener Festwochen 2018“ at the parliamentary construction site in Vienna, Austria. It revives the radio tradition of political invocations of community. The starting point is the observation that sovereignty today appears to be diffusing and is increasingly producing porous nation-states. But the autonomy of the subjects is also caught in dense networks of technicalities and mega-structures that operate in the background. In a series of public talks in this rhetoric that formerly served to represent governments, thinkers, artists and political activists attempt to find partial sovereign-ties in the face of collapsing worlds.