Since Theresa May announced snap elections last month she has snubbed all proposals of democratic deliberation, refusing to attend TV debates with her opponents or incorporate civic platforms in her plans for change. While her rhetoric behind closed doors has been fiery, the Conservative campaign has been, by all accounts, subdued, dominated by bored faces in stuffy rooms. It is easy to see why. On the few occasions that the Prime Minister has hit the streets she has been confronted by vocal opposition: not the black blocs which haunt the unconscious of the British tabloid media, but ‘ordinary people’, disabled, impoverished, disenfranchised.

Yet from the street view alone it is clear that his clear, principled opposition is speaking to the bubbling discontent in British society.

The contrast with Jeremy Corbyn, the controversial Labour leader who has campaigned tirelessly across the UK, could hardly be more blatent. Corbyn, who won and has maintained leadership on the back of a campaign of popular participation, has been criticized for galvanizing factionalism on the Left. Yet from the street view alone it is clear that his clear, principled opposition is speaking to the bubbling discontent in British society. Thousands come day after day to hear him speak, with great passion, about the long-term exacerbation of inequality over which the Tories have presided. While the media make tactical use of polls, which show the party trailing by a clear margin, there is another side to the story, a popular discontent, that they can no longer ignore.

In the past few days this force found a new representation, as musicians from the London grime scene broke their usual silence on politics and intervened directly in the election. Grime, a lo-fi rap genre with roots in garage, jungle and other urban bass music, is one of the biggest phenomena in Britain right now, with artists like Skepta and Stormzy selling hundreds of thousands. If there is a ‘sound of a generation’, for the angry urban millennial, then this is it. 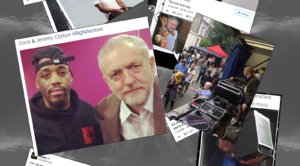 So when artists like JME and Akala began to publicly endorse Jeremy Corbyn on social media, the country, and most importantly young, apparently depoliticized parts of the electorate, began to take notice. It is bad marketing to make political statements in such divided times, and while these artists can be fairly confident of support, due to the relatvely clear generational dynamics in Britain, it would be overly cynical to reduce their sudden politicisation to pure pragmatism. This kind of intervention can make a difference.

Over 500,000 young people between 18-24 have registered to vote since the general election was called, an enormous figure in UK terms that shows just how much the political landscape is moving in the UK, below the status-quo bias of the tabloid headlines. #Grime4Corbyn, which “encourages young people to take part in the electoral process by registering to vote”, is a vital part of this.

As the rush to register approaches its climax, for example, #grime4corbyn is organizing a secret party in London, which will enable them to engage people offline, and build a quick effective database for further organisation. This is a fun strategy with a clear aim: “to harness energy to help elect a Labour Prime Minister who will reduce the voting age to 16, cancel exorbitant university tuition fees, cancel zero hours contracts, and through a new genuine living wage and building 500,000 council homes a year, give Britain’s young people the homes, jobs and education they need – for the many, not the few.”

Is this a pipedream in today’s Britain? Labour’s manifesto is one that no progressive voice should sniff at: alongside measures for young people celebrated by the campaign are tangible pledges to halt the privatization of the NHS alongside obvious measures like free parking at hospitals, re-nationalization of railways, which are among the most expensive in Europe, and a heavy ‘fat cat tax’ on the criminally wealthy. “But it doesn’t add up!” the usual critics have scorned (around election time Britain has a tendency to reveal itself as a nation of armchair mathematicians). Journalist Paul Mason, among others, have worked hard to disprove this, engaging publicly with the numbers. 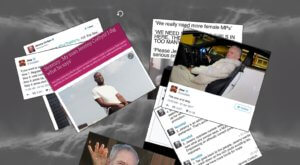 Not only is Corbyn not Theresa May, he represents, like Bernie Sanders, a voice from the inside/outside, a radical who understands the mechanisms not only of Westminster politics, but of how the economy, that most contested battleground, functions. This was perceived, with some justification, as the missing knowledge from purely grassroots movements like Occupy. As with Sanders, whatever the result, it is the forces behind him, from momentum to #grime4corbyn, that can make a long-term difference.