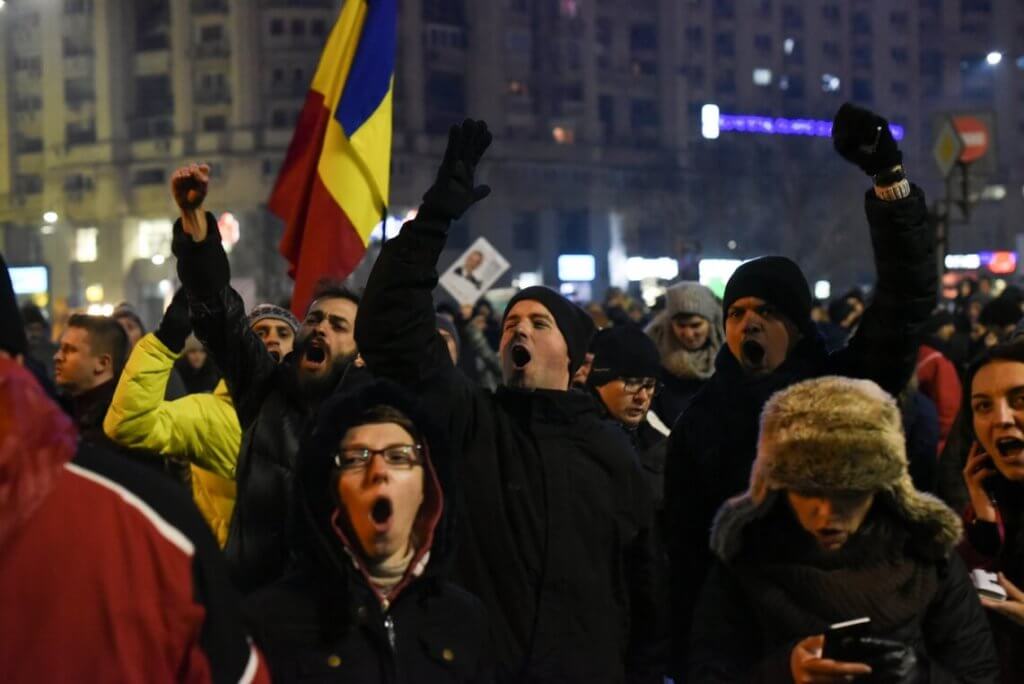 For several days in the past week, close to 300,000 people protested on the streets in many cities across Romania. The protests may be far from being some of the biggest, after the 1990s (which is just media speculation linked to the protests), but they are significant, nonetheless. The initial reason people took to the streets was the decision of the government to pass an urgency decree in order to make changes to the Penal Code. One of the most controversial changes involved the decriminalization of the abuse of office and other related misconducts. Many profiled politicians were expected to benefit as a result, either by having charges against them dropped, or by facing shorter sentences. The current head of the Social Democratic Party is thought to be one of those who will benefit. He is pending trial for the prosecution of instigation of abuse of office, alongside already serving a suspended sentence for violating electoral legislation. Any sentence would immediately mean jail time for him, at the end of his political career. What compounded this string of suspicions was the manner in which the decree was passed: closed to midnight, without prior public debate. People took to the streets as a result and demanded the cancelation of the decree, and the resignation of the Justice Minister – who was accused of not only orchestrating it, but also of being extremely arrogant about it. Soon, however, the protests transformed and asked for the resignation of the entire government and called for an early election. On Sunday afternoon, the government cancelled the decree, thus hoping to curb the protests – but to no avail. As I write this (on Sunday evening), tens of thousands of people are out on the streets again. Meanwhile, however, a small group of no more than 2,000 people protest in front of the President’s house, in favor of the Government.

On Sunday afternoon, the government cancelled the decree, thus hoping to curb the protests – but to no avail.

This immediately points to the wider ramifications of these protests. People that took to the streets understood the issuing of the governmental decree as an attempt to reverse the anti-corruption policies of the last decade. The Social Democratic Party, considered to be the de facto heir of the former communist party, was particularly targeted and provided a series of high-profile politicians accused of (and some even jailed for) corruption. Therefore, there is always the widespread belief that they will do anything to curb the anti-corruption drive. The issuing of the decree, and the manner in which it took place, did little to ease these fears.

On the other hand, anti-corruption has been a very destabilizing factor of Romanian politics. By targeting only corrupt politicians it dialed down on the powers of Parliament and cut the leadership of the mainstream parties to the bone. Additionally, anti-corruption managed to compromise politics itself – a realm already considered to be murky, sinful and populated by venal characters. To put it shortly, politics itself became a synonym for corruption. The technocratic government that replaced the political one led by Victor Ponta (former head of the Social Democrats) at the end of 2015, bespoke this tendency to replace politics with technocracy in order to avoid corruption.

The December 2016 elections caused further complications. The Social Democrats won a clear mandate, meaning they now have the majority in Parliament and run the government. Their main opposition comes not from rival political parties (that are barely credible and insignificant in Parliament, following the vote) but from the President. Mr. Iohannis was elected in November 2014, against the Social Democrat candidate – not because of his own merits, but because he was the most credible to continue the anti-corruption efforts. Since then, his time in office has been marked by several blunders. However, his career seems to have been revived, following his decision to join those protesting against the government on the streets.

Thus, we now witness a split within the executive of the country: on the one hand is the Prime Minister, backed by the Parliamentary majority; on the other hand is the President, who enjoys the support of the judicial system and controls the secret intelligence service. The protesters on the streets are clearly in favor of the latter, sometimes in explicit terms.

This forms one of the peculiarities of the Romanian protests. The anti-government crowd is not backing any particular political party and it does not support a counter-figure as Prime Minister. It simply wants the direct implementation of anti-corruption politics. This is discernable, in the fact that people root for the National Directorate of Anti-corruption, the key institution of the anti-corruption campaign. This peculiarity and particularity make the Romanian protests atypical in a different manner, as well. They have no leaders, no unified message and no apparent, overt co-ordination. Everybody can come and participate.

The only division line that is accepted is the one between corruption and anti-corruption: between “them”, the politicians, and “us”, the people.

But, this should not deceive us! Because what always lurks in the background is class politics, and these protests are no different. In very broad strokes, the mobilization against the government was also a mobilization against its economic policies. The Social Democrats increased the minimum wage and pensions, cut taxes for the poorest segments, and increased – even though just slightly, compared to the needs – the social welfare spending. They will need to balance out these measures by rethinking taxation, particularly with regards to scrapping the flat tax, and by taxing richer segments and corporate income. The people who took to the streets are adamant that this should not happen, since such changes would affect their own interests. Unsurprisingly, corporate workers (especially their bosses), were on the streets to protest. People in Bucharest’s corporations were offered free days off work to be able to stay up at night and protest against the government. Journalists and other media pundits, who in the past already decried the social measures of the government as reckless spending, tuned in and added their messages against the government. It is no wonder, under this context, that the protests quickly moved from a specific demand regarding the decree, to the resignation of the newly appointed government as a whole.

The government’s decision to issue the decree was hasty, unnecessary and ill-advised. It may have been driven by political calculus, misjudgment or both. Either way, it managed to once again hide class conflicts behind anti-corruption goals.

How does this protest compare to previous ones? The protest against the Rosia Montana goldmine exploitation more or less consisted of a common front against what was perceived to be the perfect embodiment between global capitalist interests and local corrupt politicians. This relationship, which was not articulated in critical terms but in nationalistic ones, was secondary to the fact that some important discussions (albeit inconsequential) regarding local capitalism and the nature of corruption, took place. The November 2015 protests were a step back from that moment, because they occurred as a blind reaction to a tragedy that killed 64 people. Corruption was blamed for the tragedy but this was a shortcut in order to avoid the larger picture of underdevelopment and deregulation of capital. This year, protests are a different matter altogether: they signal a crisis at the heart of the executive level and shifting terrain of politics. Protesters on the street do not seek to offer a political representation for their demands. They just want to move the government out of the way in order to allow unabated anti-corruption. The aforementioned class relation is what magnified the protests further and will ensure that the social cleavage will persist beyond this particular moment.

This article is co-published with A2larm.cz.