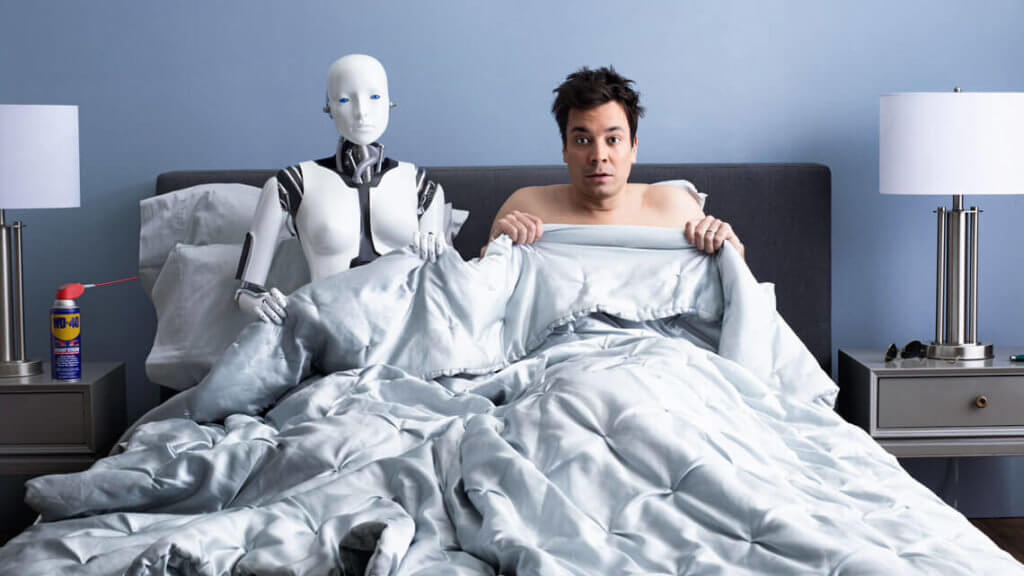 We Czechs enjoy judging whether someone has worked ‘enough’ and relegating those who have not to the unenviable position of despicable filth. It is ridiculous. In actual fact, we are running an absurd race to the bottom, competing with one another to be ripped off. Our wages are already laughably low. Now the threat of widespread job loss due to the automation of work looms on the horizon. The Czech Republic will be one of the countries which will suffer most from the replacement of human labour with robots. This should be reason enough to start exploring the idea of a completely different society, one in which our income would not depend on paid employment. But can we?

As a recent OECD study shows, among developed countries, the Czech Republic and Slovakia are the most vulnerable to widespread unemployment caused by the introduction of automation in the workplace. People will not only lose their jobs, they will also lose access to the resources and stability necessary to live in our society.

Think of it this way: the Czech Republic has been invaded by aliens. As soon as they shrug off their spacesuits, it becomes abundantly clear that they have not come to steal, plunder, rape or take over the government – in fact, they have just come to work. There are thousands of them. They are highly intelligent, capable of learning and work is, literally, their reason for existence. They don’t need rest, free time, accommodation, privacy or sleep. They don’t have to eat because they don’t feel hunger. They don’t have emotions, desires or sexual needs.

These aliens start participating in our economy. They want to work and they do not require pay; the work being their only reward. They start in routine jobs, in factories and production, but in time, the aliens show the capacity to perform more complex tasks and start replacing humans in highly skilled jobs. Even employers who want no part in this will eventually have no choice but to start employing aliens in order to remain competitive in the market. Unemployment will rise, the wages of those still working will stagnate or drop. Czechs, fearing the future, will stop buying and spending. An economic crisis will follow, revealing that the alien invasion has never been quite as innocent as it first appeared.

Robots as assemblymen, robots as journalists

The aliens of whom we speak are not the ‘Muslim invaders’ who have become such a popular (and utterly absurd) media focus in the Czech Republic. We are talking about automation. The threat we face is due to the fact that, of the countries in the EU, we rely most heavily on industry. Almost fifty per cent of our economy is based on industry, making us more dependent on it than neighbouring Germany. About 1.45 million people – that is a third of Czech employees – work in industry, predominantly the in automobile manufacturing. These workers will be the first to be displaced by the metal aliens.

Alongside factories and supermarkets, robots are now used in food manufacturing.

There are plenty of examples from other countries. In the USA, the financial crisis was followed by an eighteen per cent increase in industrial production, but no boom in employment. Instead, the factories were operated by robots.  According to a 2013 study, 47 per cent of American jobs are at risk of disappearing because of automation. And the technology keeps getting smarter: alongside factories and supermarkets, robots are now used in food manufacturing, transport, medicine and education. And it doesn’t stop here.

In 2009, a group of scientists at the Northwestern University in Chicago developed technology capable of doing a journalist’s job. The system, known as StatsMonkey, originally wrote articles about sports: after the input of a set basic data set the computer managed to create a text indistinguishable from one penned by a sports commentator. The group then proceeded to found a company called Narrative Science and to introduce a further improvement in this technology, Quill, a computer capable of writing pieces from multiple fields of interest, including politics and economics. Quill has since been used by many large media outlets, including  Forbes, journals and news portals (although many prefer to keep it secret so one can only guess whether the article you are reading was actually written by a human being). Nevertheless, the folks at Narrative Science claim that, within fifteen years, robots will have become the authors of more than ninety percent of news articles written.

The path towards a new form of totalitarianism?

But here in the Czech Republic, we are not concerned with such issues. Instead, our largest political parties are focused on out-doing each other in working out a means of efficiently disposing of ‘slackers’ and ‘parasites’. Which is simply absurd. One cannot help feeling that repression and a frantic enforcement of work (in a time where work itself is threatened by widespread job loss) can only pave the way towards a new fascism. Why have Czech politicians chosen this moment to combat unemployment? Why do our ‘leftist’ parties (in reality, often functionally indistinguishable from the ultra-Right) want to punish the unemployed, or even ‘lock up the parasites’, as the Communist party would have it? Why does President Miloš Zeman so ardently advocate abolishing social benefits? Are they all merely fanatical idiots, or is there something more behind it?

The American blogger, Noah Smith, has warned against a future in which the ‘mass of lumpen humanity teeters on the edge of starvation’. The automatization of work could result in the majority of the human race becoming ‘redundant’. We will return to feudalism – only this time we will have modern technology and humanity will be superfluous to labour. The richest will seclude themselves in fortified communities protected by drones and armed robots, while the rest will have their basic human rights taken from them. A situation, in fact, similar to the one depicted by the science fiction film Elysium, where the plutocracy lives on a comfy orbital station while most people suffer unbearable conditions on Earth. Today, this may sound overblown and conspiratorial; but where are the guarantees our ‘elites’ are not laying the groundwork for a similar system?

To free ourselves from work

In order to avoid such stark visions of the future, we need to re-evaluate the role of work in Czech society. After the revolution in 1989, the ideal to strive for was supposed to be freedom – but we have ended up in a totalitarian system of work instead. Work has become a new religion which has devoured our lives; in exchange, it fills us with anxiety and erases the difference between free time and working hours. No one is willing to ask why we toil for hours on end in exchange for meagre alms. Why should we listen to officially-sanctioned morons who preach the need for austerity while our lives have become nothing more than the means for the rich to earn money?

The next step will be to establish an unconditional basic income. It is not the ultimate solution to everything and we need to fight for a basic income greater than the current minimum wage. This base income will offer benefits other than guaranteeing a standard quality of life. One of the dangers of automated work is that society will produce goods that no one can buy. An unconditional income would provide the unemployed with the money needed to continue purchasing and, in so doing, supporting the economy. It would also motivate people to look for work they actually want to do – or even to start a business of their own. It would be a solution for the people who need to work less or not at all and would prefer to focus on more useful things.

Unconditional basic income would be a temporary solution – one that sets our hands and minds free to build a different, better society, one not dependent on slave labour and exploitation.

Such an unconditional basic income would be a temporary solution – one that sets our hands and minds free to build a different, better society, one not dependent on slave labour and exploitation. Job loss has been identified as a serious threat by the OECD, the World Bank, the International Monetary Fund, the UN and countless scientific studies. The robots are coming, regardless of what we think of base income. The solution to the changes automation will effect in society is not a restoration of the feudal establishment, led by treacherous Czech politicians hell-bent on punishing the ‘parasites’. We are facing what may turn out to be the greatest challenge humans have faced in history: we need to free ourselves from work.