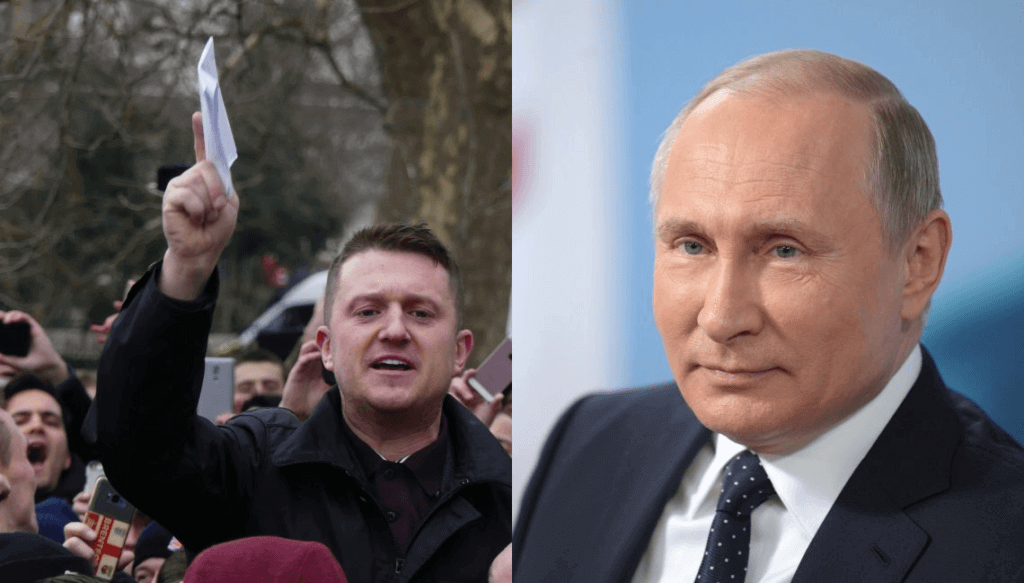 Martyr of the Free Word

Let us start with the unnecessary introductions, just in case: Robinson first received public attention as the founder and leader of the far-right English Defense League after a short tenure in the British National Party. EDL was built from a core consisting of several football hooligan groups that had a bone to pick with a small Islamic community in Luton, the bone being the fact it existed. Its basic tenets consist of claiming that Islam is a primitive, intolerant religion (pot, meet kettle), that it is incompatible with British society and needs to be fought – if possible, violently – wherever it is encountered. Adherents of EDL’s form of cultural racism include such heroes as Anders Breivik and Darren Osborne, although the group dismisses any direct connections.

Back to Robinson, though: he left EDL 2013, citing its excessively violent methods – he should know, given his rap sheet – as well as a need to fight Islam (surprise!) using new democratic ideas. Thus he turned to activism, first alongside the British branch of Pegida, then as an “independent journalist”, covering exclusively criminal cases where the culprits were Muslims in order to reinforce the good ol’ EDL discourse. In the course of his good work he had more than a few brushes with the police, and was fined for publicly and falsely accusing a 15 year old boy of assault purely on account of him being Syrian (up to faking photographs to support his claims).

What made Robinson’s career into what it is today, though, was an arrest for contempt of the court – he was taking videos of the accused accompanied with prejudicial commentary (apparently in hopes of spurring another public lynching campaign against a Muslim). Mass protests by far-right followed and when the dust settled and Robinson got away on a technicality, he started mining his new reputation as a martyr for freedom of (hate) speech, who stood up to the corrupt media and court system for all it was worth, especially following his subsequent ban from posting on Twitter and Facebook.

Which leaves open the question of what exactly this paragon of patriotism is doing in the Czech Republic.

The conference he intended to speak at was cancelled a day before it was scheduled, with Robinson already in Prague. Its topic was supposed to be “Family and its Rights in the 21st Century” and if there ever was a title overloaded with ideological pitfalls, this was it. Before we get into that matter, though, we need to know a bit about the people involved.

For starters, the conference was officially organized by a pair of MPs: a completely unremarkable member of the ruling populist ANO party Milan Pour, whose role in the affair is entirely comical, and a currently unaffiliated senator Jitka Chalánková, whose conservative views got too conservative even for the conservative party TOP 09. A defender of “Christian values”, who suggested that unmarried women should be forbidden from using artificial insemination and who holds a rather surreal view of children in foster care as a commodity constantly moved between foster families because “it is an incredibly lucrative business”.

The announced speakers follow a similar pattern: there was another conservative, Christian Democrat and member of the European Parliament Tomáš Zdechovský; former Polish ambassador to Norway Sławomir Kowalski, who shares Zdechovský’s and Chalánková’s interest in fighting the evil, evil Norwegian government in rather silly ways; there was the Social Democrat MP Jaroslav Foldyna, mostly notable for his nationalist, anti-gay, anti-immigration yet very, very pro-Russian views; and then there was Petr Bystroň, an MP for the German nationalist anti-immigration AfD. All in all, speakers who are most likely to agree and pat each other on the back for reaffirming their ideologies than to actually discuss real issues. We have conservatism, nationalism and anti-immigration all stewing in a nice, big pot of plain old idiocy. Robinson – invited in his capacity as an “expert on crimes against children” (as long as they are committed or could have been committed by Muslims) fitted right in.

And these people were supposed to discuss family rights.

We can identify three common strands among the speakers: nationalism, xenophobia and conservatism (all under the comfy umbrella of “Christian values”), with an undercurrent of anti-EU sentiments. Every one of the speakers subscribes to at least two of those – this was a conference intended to produce rather obvious answers.

Take Robinson: his one constantly circulated story is about “Muslim rape-gangs” terrorizing Britain. Putting aside the rather suspect logic behind the story and dubious evidence, exactly how relevant is it to the Czech situation? Not in the least. Families here have to deal with a completely different set of issues, and crimes against children take rather different shapes. Yet inviting someone to talk about, say, sexual abuse in the Catholic Church and its coverups – a thing of great concern in the region – would unduly rock the ideological boat; much better if we all agree that Muslims are bad because the nice fellow behind the lectern says so.

Exhibit B: one extremely relevant question when it comes to “Family Rights”, whatever it may mean, would be gay marriage (the conference was actually announced while the Parliament discussed this very issue; an utter coincidence, naturally). Admitting that it is, in fact, the 21st century and the definition of “traditional family” has been steadily shifting and evolving could do some good – too bad all of the speakers are either conservative Catholics or just plain homophobes. Again, discussion was never the point: the point was to establish that “Family Rights” are only allowed to the right and proper white Christian family that says its prayers every day and lovingly calls for peaceful extermination of all other religions and races in their country. Meanwhile, the good and blessed conservative regime keeps constant vigil protecting them from criminals who dare to differ in any way at all.

It is in the somewhat alchemical nature of ideologies to mix and match and borrow from each other, and this particular concoction is not unknown in the Czech Republic. The difference it is usually attributed to minor parties generally classified as extremist, like, say, the alt-right SPD, whose absence from the speaker list is rather interesting. A possible theory would be that the organizing parties intended the conference to be a serious affair, with it taking place at the Parliament, presenting their ideology in a matter palatable to the mainstream media and voters – to which the participation of a party viewed as a band of liars and idiots would be rather detrimental. Good thing they invited Tommy Robinson, then.

One Step Forward, Two Steps Back

That was not a joke; had Robinson not been invited and his invitation dug up by media a day before the conference happened, the entire farce would have played out and been covered as serious news. As it was, the Czech Republic witnessed a rather amazing race to get as fast and as far away from the conference as possible.

The first criticisms came from the Pirate Party and the British ambassador in Prague, quite reasonably asking for an explanation of what the hell far-right extremist was supposed to be doing in the Parliament. The news of their co-speaker apparently shocked several of the politicians involved: Zdechovský cancelled his invitation claiming he had no idea who Robinson was other than that “he deals with child abuse” (doing a background check on his co-attendees before accepting the invitation was apparently too much of a bother for his genius), and he was too busy fighting Norway to attend anyway. Then came the cancellation from Kowalski; Chalánková backed off as well, citing the absence of Kowalski as her reason. At that point, the only ones still intending to speak at the conference were radical nationalists Bystroň and Foldyna. Presumably realizing that this ideological mixture lost the excuses of conservatism and religion, leaving behind only open intolerance, and given his party washed its hands of it, Milan Pour called the whole thing off the evening before it was supposed to start. Robinson spent the night in Prague drinking and mingling with the Czech Islamophobic scene. All’s well that ends well, right?

But there is one more figure with a rather interesting role in the whole affair. See, in Pour’s case, the usual excuse of “I had no idea who that man was” could be reasonably believed; he claims he did not send the invitations himself and blames Milan Roháč, the man who was supposed to moderate the debate, and a rather interesting if shadowy figure himself. Roháč is currently the head of a group called Young Patriots; in the past he worked with Martin Konvička and was a frequent guest of conspiracy broadcasts. He only announced that Robinson was coming the day before the conference, explaining that they kept it quiet “because of the newspapers”; thankfully the newspapers noticed this announcement, confronted the useful idiot Pour and the rest is history. On a side note, the same announcement was made roughly at the same time by the pro-Russian anti-immigration (funny how these two things planks seem to go together here) activist and fellow conspiracy freak Žarko Jovanovič, another loving nationalist and buddy of Roháč.

We can now take a reasonable guess as to the answer to who invited Tommy Robinson, but the million-dollar question remains: just how far up the Czech government can ultranationalism reach?