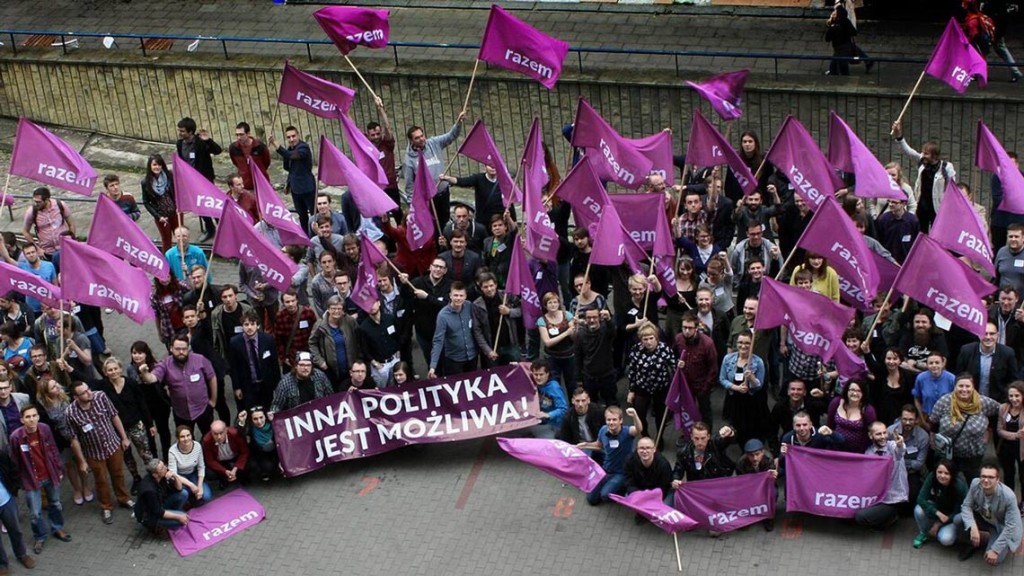 There are many indications that we are coming to another turning point in post-1989 Polish politics. Politics loves dichotomies, which is why up until now every qualitative change has been determined by the two dominant camps, whose disputes filled the media and the minds of the electorate. Everyone senses that the current structure is falling apart and that a new one will have to be built to replace it. Tomorrow Poland for sure will be different. It is therefore worthwhile to describe those divisions and disputes, as well as the new political initiatives emerging today and the antagonisms that could crystallize between them.

The initial period after 1989 was characterized by a “post-Communist” divide in Polish politics. From the chaos of the first years of transformation there emerged two camps: post-Communist and post-Solidarity, which traded places in and out of power until the Rywin scandal in 2001. This period ended with the discrediting of the post-Communist Democratic Left Alliance (SLD) and the emergence of new political forces, to which the Alliance ceded power in 2005. Up until that point the major dispute among politicians and journalists had concerned the question of lustration and de-Communization broadly conceived. This issue masked other questions (such as abortion and the clericalization of the state), which were de-emphasized as red herrings.

The Rywin scandal and the resultant committee of inquiry, which was closely followed by anyone interested in politics in Poland, brought to light a new “post-Solidarity” divide in Polish politics, led by Donald Tusk and Jaroslaw Kaczynski. In accordance with the previous model, they were expected to come to power together in a coalition between their respective parties, PO and PiS, representing the post-Solidarity elite, and continue to trade places with the post-Communists. But the political realities had changed. SLD could not escape becoming marginalized and the new parties came to dominate, establishing between themselves a new line of conflict in national politics.

We are currently observing the waning of this period and a new breakthrough, which can be deemed a turn, or a “materialistic” divide in Polish politics. We will see the first effects of this new state of affairs as early as the October parliamentary elections.

Their dispute, of which Poles have grown extremely tired, centered on Kaczynski’s idea that a secret “system” ruled the state. After the 2010 Smolensk plane crash, the notion of a “system” was seamlessly replaced by the idea of a “coup.” Those same politicians and journalists who devoted themselves to the subject of lustration abandoned it overnight in favor of the “system,” and subsequently the “coup.” We are currently observing the waning of this period and a new breakthrough, which can be deemed a turn, or a “materialistic” divide in Polish politics. We will see the first effects of this new state of affairs as early as the October parliamentary elections.

The person with the most potential to shake the PO-PiS duopoly is Pawel Kukiz, a rock musician who lacks both political experience and a political party, but who was able to secure third place in June’s presidential elections with sensational 21% of the vote.

The aftermath of the elections also saw the successful launch of a new party, Nowoczesna.pl [eng. modern], by Ryszard Petru, a well-known neoliberal economist and a protégé of Leszek Balcerowicz, the man behind Poland’s post-’89 shock therapy. Polls give this new party 8-10% support.

A third initiative has emerged from the left, the new party Razem [eng. together], which aspires to be a Polish Podemos or Syriza. Its slogan centers on the “precariate,” or those people who work on so-called “junk contracts,” civil law agreements for temporary employment without benefits that curtail employee rights. In Poland, such workers represent a larger percentage of the labor force than anywhere else in the European Union. Razem has decided not to name a party leader and has also decisively rejected the possibility of an alliance with well-known politicians. This is their means of reestablishing the Left’s credibility. Their lack of a leader is to serve as a clear alternative to the leader-centered party model promulgated by Tusk and Kaczynski.

Contrary to appearances, it is not Kukiz but Nowoczesna.pl and Razem that can transform the Polish political scene. But how is it that Kukiz is so popular? His honesty and his authentic engagement stand in stark contrast to the political establishment. It seems that, whatever the former front man of the rock group Piersi [eng. boobs] says, he truly believes it. Unlike other political figures, he has not been flattened like putty by a PR machine. Voters are convinced that he is not merely looking out for his own career.

Kukiz is only a symptom. He is just the latest seasonal spokesman for those who have no one to vote for, just like Janusz Palikot and Janusz Korwin-Mikke.

The incredible paradox of Kukiz lies in the fact that his only slogan, the introduction of single-member electoral districts (winner takes all), which he fanatically supports, would give full and permanent power to those against whom he is rebelling—PO and PiS. If parliamentary seats were distributed according to current polls, or even according to the results of the presidential election, Kukiz himself would get nothing, despite his excellent showing. Meanwhile under current electoral law, which he so desperately wants to change, he would get about 100 of the 460 parliamentary seats.

But people do not support Kukiz out of a devotion to electoral reform. Kukiz is only a symptom. He is just the latest seasonal spokesman for those who have no one to vote for, just like Janusz Palikot and Janusz Korwin-Mikke, who filled the same role in the previous election because they were the loudest in their denunciations of politicians in the media. Each of them was able secure more than trace support only right before ballots were cast.

Kukiz’s anti-party—because he is explicit about not wanting to establish a political party—opposes the entire political class en bloc, while Noweczesna.pl and Razem are creating a new axis of contention that can replace the current struggle between PO and PiS. Let us note that lustration, the Kaczyńskis’ “system,” the “coup,” were retrogressive issues because they were fabricated and completely detached from actual social problems. Although they dominated political discussion, these issues were merely red herrings. Observing the discourse of Nowoczesna.pl and Razem, it is clear that we are dealing with a new “materialist” division in Polish politics.

This new axis of conflict might set Polish politics on the proper path. The existing debate has rendered Polish democracy and modernization dysfunctional. From ’89 up until the present, the debate was not between “left and right,” but between “right and wrong,” meaning that it was inherently only quasi-political. This meant that political debate could center not on “upwards” rivalry but on dragging opponents down. People voted against PiS or against PO. This new conflict could prove to be more functional in terms of economic solutions. It could yield two different visions of development that would enable social organization centered on differing economic interests, rather than on searching out hidden agents or seeking to find TNT among the wreckage of a plane crash.

From ’89 up until the present, the debate was not between “left and right,” but between “right and wrong,” meaning that it was inherently only quasi-political.

Razem wants to introduce a 35-hour workweek, increase the powers of the State Labor Inspectorate, and ban unpaid internships. It promises to raise the level of tax-free income to twelve times the subsistence level and to introduce a “CEO” tax rate of 75% for annual income above half a million PLN. Razem intends to introduce a progressive corporate tax [now it’s 19% and flat] and to eliminate tax privileges for companies operating in special economic zones. The party also intends to ban eviction and promises to eliminate healthcare premiums and to finance health services through the state budget. It proposes to stop the closing and privatization of schools, and to tie education expenditures to GDP. It also hopes to relocate some central government offices outside of the capital. Moreover, Razem promises to veto the TTIP agreement between the United States and the European Union.

Petru has yet to unveil his program, but he has listed five values that are important to his party: freedom, development, engagement, responsibility, and—of course—modernity. In interviews he says that he wants to reduce the size of the public sector, to liberalize employment legislation, and to introduce participatory budgets in all municipalities.

Most characteristic for Razem and Nowoczesna.pl is their point of contact, that is their unwillingness to reveal their views on philosophical issues.

Both parties are linked by several materialistic promises tied to limiting the rights of parliamentarians. Razem wants to set deputies’ pay at three times the minimum wage. Both groups have also promised to deprive political parties of state funding. Both parties want to limit not only MPs but also mayors to two terms in office.

Most characteristic for Razem and Nowoczesna.pl is their point of contact, that is their unwillingness to reveal their views on philosophical issues. Indeed it is possible that their views are similar. Razem says that it is obvious to them that they are critics of the Catholic Church and defenders of minority rights, but what they say is perceived as a tactic resulting from fear of rejection by a seemingly conservative electorate. Leftist circles view their behavior rather critically because these issues are both important and unresolved. The harmful impact of Poland’s especially backwards Catholic Church on education, minority rights, and state finances. Issues such as the decline of public media, which represents the only point of access to culture for three quarters of the population, or discrimination against women also remain current.

The party’s attempts to distance itself from well-known politicians or left-wing activists have also been received critically. The decision not to appoint a leader does not look promising. In this sense Razem is more reminiscent of Indignados, which was unable to successfully transition from social protest to social movement, than of Podemos or Syriza, which learned from these earlier mistakes.

Those on the left who want to distance themselves from Razem should provide a better answer to the question of how a party should represent both philosophical and social issues when the electorate is indeed socially conservative. We should acknowledge that there is no such thing as a “true left.” And those who concern themselves with measuring the leftism of others usually lack the energy to accomplish anything else.

This article was originally published by openDemocracy.net